What does the Two of Swords Mean In A Tarot Reading?

The Two of Swords is a card that effects most people now and again in their lives and when the time comes it is never a comfortable position to be in.

Nevertheless, sometimes the cycles of stasis inevitably become the reasons that we push ourselves so hard to progress. In this, though the season you are in is difficult, there is an added perspective of necessity in it as well. The Two of Swords is the card of being stuck in the middle and being afraid to move.

There are in fact so many options at your disposal in this moment that you fear making a move in case it is the wrong move therefore your hands are tied and you are stuck. Understandably this is not a position in which you would prefer to stay, so you desire with great strength to push out of it, but you don’t know where to start. You desire to have a new approach to life, but your emotions play a large role in your current circumstances and that is making it difficult for you to decide what you should do. You want to be the peacemaker, but you tend to do so at the expense of your own voice or opinions, thereby devaluing yourself. Your need for stability is now in conflict with your need to create change, thus creating the stalemate that you find yourself in.

The image on the card in the Rider Waite Deck depicts a woman who is balancing two swords on her shoulders, representing the sharp edges she has placed herself against due to indecision. She is blindfolded representing the overall blindness to her life, and the situations that she has gotten herself into. Behind her are rocks in the sea, representing the ease of trapping those who are not allowing room for flexibility in their lives. The New Moon also shines down upon her which shows the tension in relationships, both friendship and other. She has a well-developed sense of balance, but her particular rhythm and ability to hone in on that has been compromised.

At this point in time the Two of Swords is telling you that there is no confusion present, none that you are not already aware of. You are currently choosing to keep your eyes closed to possibilities so that you do not have to make a difficult choice. Sometimes these choices can come in the form of having to choose between friends, or getting involved in overly dramatic situations. Sometimes you are being asked a direct question and for the purpose of not hurting the person that you are involved with you are just choosing to refrain from a response, which is putting you AND your loved one in a frustrating position. In the attempts that you have made to save yourself from having to be hurt as a result of making a choice you have begun to close off your heart and this is producing deep levels of unhappiness.All of your actions at this time are being influenced not by your meditative and calm self, but by erratic and conflicted emotions, which is never a good position to be in for any long period of time.

Now is the time for you to consider a solution, there is an action that must be taken. You must give in and have faith in your intuition and in a connection with higher source energy to get you through this time. When you do this, you are allowing for your inner peace to be restored which will breathe the life back into your veins. Consider the fact that you are unable to see your options, so your personal perspective may be skewed. Therefore in addition to focusing on communicating with your higher self, you must also seek help from others who are capable of assisting you objectively. If you do not know someone like this in your personal life, then a professional influence would be equally, if not more so, beneficial. The key is to gather information from varying perspectives, so that you can weigh out the pros and the cons of your decision pragmatically. By listening to your emotions, you will know when the time has come to act. In so doing, you will find recognition in your path as well as the success of getting out of the pit of non-movement. While you process this card, consider what it is that you are avoiding, who are you having a hard time reconciling with and what decisions would you prefer to not know about or make?

The Two of Swords in Love

When the Two of Swords presents itself in your reading regarding love and relationships then you will need to make a decision. Right now you have put yourself in the position of consistent indecision which is tampering with your perspective. If you are single then in love this means that you are either avoiding pursuing something for fear of being shot down, or you are pursuing more than one person at a time and you are not appropriately giving your full attention to any one person. You need to choose. You cannot keep going this way. If you are in a relationship that is having problems, then the Two of Swords is showing you that now is the time for you to call those problems out and find actual solutions. The lack of momentum being built between you and your partner is harmful. Seek counseling if you cannot decide what to do on your own.

The Two of Swords in Health

The Two of Swords in Health represents a level of being split in half on how to appropriately care for yourself and others. There is a division in attention span; you are sacrificing too much to give to others who are ill, thereby creating the possibility of making yourself ill. You must find the balance between the two, and even if it is painful sometimes, you need to create time for yourself to process everything that has gone on. You do not want to create a level of sickness for yourself just so that you can get a break. That is not healthy.

The Two of Swords in Work and Wealth

The Two of Swords in Work and Wealth exemplifies the concept of being torn in two directions. What a situation the lady in the picture has found herself in! This is not a great place for anyone to be, especially in a work situation. It is as if she is defending herself, feeling isolation and blinded to the truth. I do like to think that the blindfold is more about meditating of the next move. If her arms move even for a moment she might fall over into the sea behind her. The problem with this card in a career context is that sudden moves may indicate that a person is trying to protect themselves. Either yourself or someone you work with is “between a rock and a hard place” there is not an answer, but this person has two choices to make. In both choices, quiet contemplation is required and a difficult decision is required to move on. As her arms are crossed over the heart chakra it can symbolize a decision with the head rather than the heart.Currently, there is a possibility for you to work in two entirely different venues. You see for yourself a desire to move onto something that is more creatively stimulating, where you might be able to potentially help more people, but you are afraid of making the leap. Consider your options at this time. If making the leap is not safe, financially, then begin taking the steps toward making yourself financially ready for such an experience and that will get the ball rolling for you.

Two of swords in the advice position of a spread

Two of swords in an advisory position suggests that you need to review a situation in it’s full. The blindfold that is worn on the picture of this card suggests that things are hidden. Things are hidden from your view and the advice is that you need to look past everything. In the advice position, the two of swords can also suggest that you are not letting anyone understand you right now. As the two swords are both heavy and the women holds these swords across her body it represents the “control” of emotions. The two of swords also represents being “closed off” in life and the choppy water behind her is a representation of the emotions that you feel.

This card often appears when one feels they are “walking on eggshells” this maybe a situation or a relationship that you are not sure will yield many problems. The advice here is to try to understand others better. The key phase in this tarot card is seeking your own inner direction and guidance in life. Try to remove your blindfold through meditation. Can you see all your options? For an advice position the two of swords can also suggest that one wants to see what is in front of them but they are blinded. You can only sit in a position for a limited amount of time (before the swords become too heavy) and you need to keep protecting what you have achieved. You need balance and insight to truly understand a problem in life. 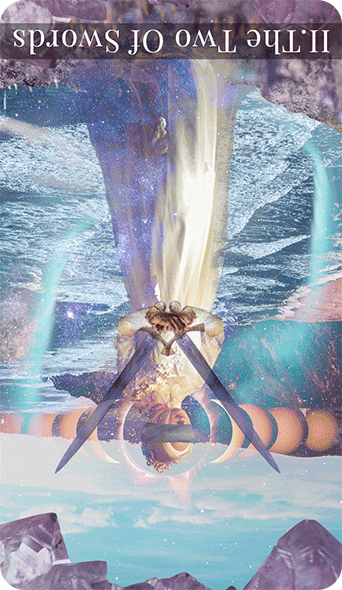 When the Two of Swords appears in your reading in the reversed position this is symbolic of a season of perpetual motion. You are making positive choices for yourself, you are not afraid to make a wrong decision because you have learned, ‘What does not kill you makes you stronger.’If you are still feeling stuck, just remember that the Two of Swords reversed is assisting you with the backing that you need to pursue bigger and better things. You do not have to stay stuck. Allow yourself the time that you need to relax, your affairs might be moving too quickly for you but do not let that get you down. Make sure that you do not make rash commitments to others before you have thought them through, primarily because your main focus needs to be on handling yourself and your affairs. The blindfold has been removed and you can see things clearly. Take actions that bring you positivity.