What The Sun means in a tarot reading?

The Sun is the most positive oracle in the deck.

In the Rider Waite deck the symbolism of the card is easily interpreted as the sun shines over a new baby and aptly named “sun”flowers in the background. The infant, along with the flowers growing, indicates new life and in readings and often represents a new direction. Children being born, questions of prosperity are answered, abundance of wealth, and recovery from illness are all implied by this card. As the infant rides atop the white stallion, he carries a red banner. The deck is famous for using color as symbolism and red often symbolizes power, momentum, and triumph. This card represents the universe coming together and agreeing with your path and aiding forward movement into something greater.

Think of the Sun as a representation of power without dominance. Rather, it is a power that allows you to be free. Essentially there is a win-win situation present in which all parties involved will get what they need. It is also an indication of liberation, freedom, and being at peace with your spirituality. Of course, depending on the position of the card in the reading as well as the type of reading itself, it can indicate success in different avenues. However, overall it is a prosperous card indicative of making the right choice and being able to be satisfied that you're on the path in one way or another.

In a reading, often this card is seen after dark times, when an a hidden opportunity is coming to light, or when clarity is needed. It can also be represented as having a new freedom to choose such as when it is time to take the next step in a relationship or job. It is not an overall “happy card”. It’s much more than that because the sun is rising on a brand new day, new life abounds, and momentum begins. The key here is to see what has been holding you back, standing in your way, or causing difficulties with progression and realizing that there is a way out and hope.

The Sun Card in Love

In relationship readings, the Sun does not guarantee happiness, but liberation. While it can state that the relationship is in a healthy place and headed on a positive path… more often it refers to everything being revealed. If there are aspects hidden on your part or with your partner these things will be come to light. In a situation, for example, where one individual is cheating or holding something significant back it can seem like a devastating card brining anger, loss, or jealousy.

A relationship with aspects hidden is by and large an unhealthy relationship. The presence of the Sun card is usually the universe’s way of telling you that you need to make a choice and provides you with all of the information to do so. Also, when the Sun card pops up in a relationship or love reading it acts as a reminder that you have the power and the strength of the universe backing you in making a choice of what direction to take in the relationship. Rest assured, it is certainly not a card to cause concern in the love department when you look at the grand scheme of things. Because even if you are asking about your current relationship and find that things are hidden or will not be working out - you can rest assured that there is s a beginning to a new relationship or even entering into a new stage of your current relationship on the horizon. The Sun promises new beginnings.

The Sun Card in Health

For those going through illness or preparing for surgery, the Sun is a positive indicator of vitality and recovery. The importance of this card in health and wellness is attributed to the growth factors and shows an emphasis in improvement of health and increased stamina. The energy of the Sun enables a healthy mind and body in healing as well thriving after illness.

The Sun Card in Work and Wealth

If you are seeking answers regarding your career or money, you will find the good omen for you. It will indicate monetary gain and growth. Health and wealth are often represented similarly in the tarot and with the Rider Waite deck it is no different. This card brings with it sound business practices and a boost of luck as well. It can indicate that it is a good time to take small risks with money or jobs such as gambling or seeking a change in your career. 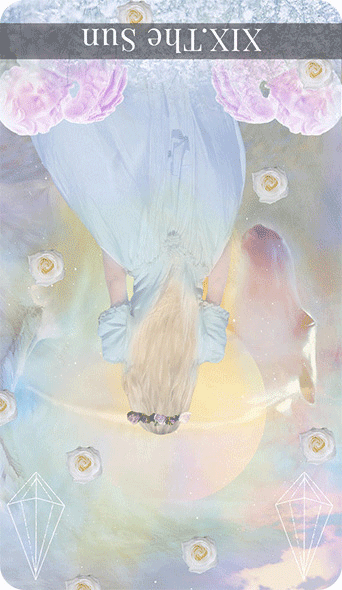 In the reversed position this card, like most other major arcana cards, it has a direct opposite meaning. It will represent feeling trapped, unable to see a way out of a situation, or having an unclear path. The key to this card in the reversed position understands that you are often the one that is creating the difficulty and that the oppression you're under is one of your own making. Often accepting responsibility for actions, making clear or final decisions, and allowing yourself to be open to new possibilities is all that is needed to find your way. Essentially, it shows that the Sun card is present in your reading, but you are not recognizing it’s force working in your life at present.