What does the Queen of Swords mean in a tarot reading?

When you have received the Queen of Swords in your reading, you are seen as an assertive perfectionist who is also hyper protective and ambitious.

A mother figure as well as a knowledgeable leader is often the embodiment represented by the Queen of Swords. You have ideas that are ruled by the drive of the heart which is what makes you so uniquely you, and someone that others enjoy being around and depending on. You are highly informed and an excellent communicator. There is very little that consistently confuses you because you are so good at figuring things out, and when others need assistance creating a plan, they come to you to help them organize their life. This card is the representative of the sheer force of will to achieve, to better one’s journey in life, to better one’s self.

The image of the Queen of Swords as it appears in the Rider Waite Deck shows an image of a Queen who is sitting very regally on her high throne staring off into the sky. Her sword is raised in her left hand, which suggests an almost daring nature, daring others to try to throw her from her throne. She will have none of it. The base of her thrown is decorated with butterflies, which are symbolic of the soul. This card is symbolic of a brown haired brown eyed woman.

She is keen and quick witted and often representative of someone who has put a lot behind her in her life. She may be a widow or someone who is unable to bear children. There is a sense of longing or mourning within her strength, longing for those that is far from her. This card can stand for widowhood, mourning, kindness but with a firm hand, gracefulness and observation as well as a fondness for dancing.

When one is having a hard time, there is no one better to go to then the Queen of Swords, for she will put your life into perspective like no other. If you tend to be referred to as someone who is very similar to these character traits then know that you are going through a phase in which all of your skills will be fine-tuned. The Queen of Swords is going to be blessing you with productivity. If you do not feel that you are currently this kind of person, then you are either going to be blessed by learning how to become adept at this kind of behavior or you are going to run into someone who is going to play this role in your life.

The Queen of Swords is someone who is a great counselor with a sharp wit and she knows how to give just the right kind of assistance. Her mental processes are developed, and she has a great spiritual depth through her experience with long troubles which makes her a master of her circumstances. Always seek the clarity that comes with the truth. You need to not allow yourself to get caught up in the lies and drama of those around you because that is counterproductive.

The counselor that is within you is waking up at this time and she seeks clarification so that you can get to the bottom of things. She uses her strength of character and her intellect to free herself of the chains of doubt and fear. She looks at the world that is caught up in drama with disdain and frustration, but at the same time she opens up her hands to it so that she can help if necessary. The clouds may surround her, but her head remains clear in the air of the real truth. She sees no restriction of gender; she is a fierce, strong, and empowered woman. You must at this time be at peace with yourself, accept whatever happens without losing your cool. Allow the negative that comes your way to being absorbed by your counseling, positive mind. See-through the illusions that the world presents.

The Queen of Swords in Love

The Queen of Swords gets what she wants. She is a fiercely independent woman who doesn’t need anyone to be happy. She is content with who she has become and the years have made her wise as well as brave. When it comes to acquiring the love of another, she does not need it but she may be in the position of desiring it just to have the company. Therefore this is a time in your life to start to selectively pick and choose the kind of people that you want in your life, and if a romantic partner is on your list of desires, then begin to make that known. Start to search for the right person who can fit your independent nature. You cannot be an equal partner with someone who is less then you in any way, be it emotionally, physically or financially, so you must begin to work the mental magic out to begin attracting someone who will compliment you.

The Queen of Swords As Feelings

The Queen of Swords as someone's feelings for another is being cool and cutting you away. There is a focus on widowhood. It could also mean cutting through the crap and the truth is clear. This Queen of Swords is a card of being wise, moving through all the smoke and hurt. It can mean they are feeling pain about the situation but does not want to give away their true feelings.

When you need to cut someone from your life the Queen of Swords appears. This is for your own good. She is all about being fine on her own. The queen is clever, intellectual and can be sometimes arrogant. She suffers no fools lightly and knows when things are not right. Do not open or show yourself too much, be kind-hearted but also deep. Try to act with restrain. Swords are also given communication and the way we express ourselves.

Traditionally, this card is known as the widow but can mean a women who is single. This is a common card for single parents. The Queen of Swords offers perspective and the ability to see the bigger picture. In a card reading in terms of advice, she shows strength in the face of problems. If you have two queens in the spread it means rivalry, three Queens is helping friends and four queens women meeting up.

Reversed, the Queen is associated with bad behavior and attack. It can mean an opponent or someone has suddenly turned on another for revenge. The Queen lacks awareness and she cannot back away. Make sure if you get this card you do not accuse someone of something they have not done.

The Queen of Swords in Health

Sometimes your stubbornness gets the best of you. You may be avoiding a doctor’s appointment, but now is not the time to be so stubborn. If you have something going on in your body that you do not quite understand, then it is time to go to the doctor and get it figured out. No, you do not need help, not really, but there is a difference between being independent and being callous in choices that are important.

The Queen of Swords in Work and Wealth

The Queen of Swords tells others what they must do. Therefore if this Queen is transiting your reading regarding Work and Wealth then you must pay attention for opportunities that will present themselves that make it possible for you to be in charge. You will know that a position or opportunity is right for you because you will automatically feel compelled to take control of it, simply because you know what you are doing. Start advertising for yourself. Now is an excellent time to pursue going into a business venture of your own. 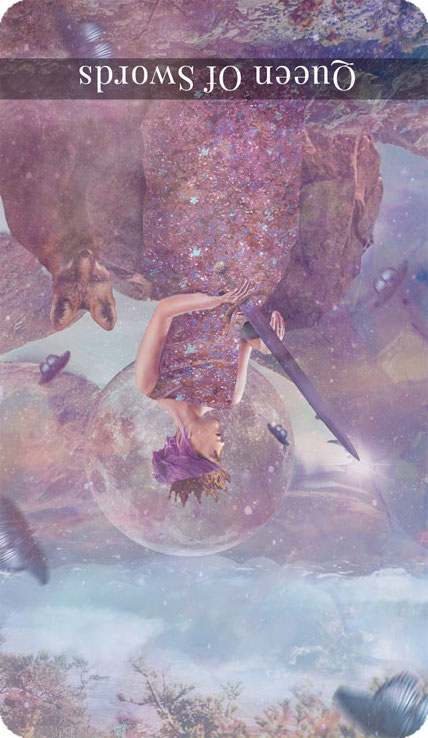 You have potential that you are as of now, ignoring. You have put up walls around yourself and you are becoming too introspective and hermit like. Almost as if you are so convinced that you know the right way of being for everyone else, who you tend to be right about, that you no longer want to go outside and interact with others because you know what is best. It is almost as if at this point you know too much. But you need to know that the people that exist in your life who are intolerant only have a narrow outlook and that is something that you need to avoid at all costs. But you need to also remember that you needn’t internalize someone else’s beliefs. Their perception is their own and it has nothing to do with you. Let go of your attachment to what others think, and let go of the attachment that you will be able to help everyone, because frankly, you won’t be able to.