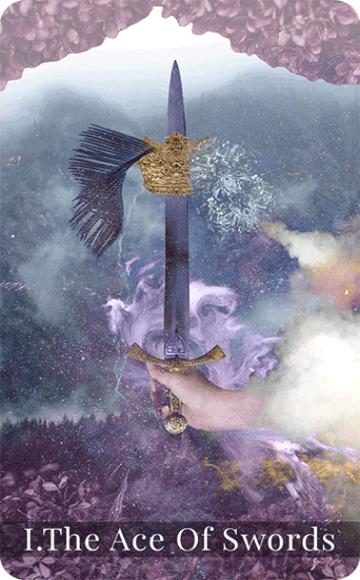 The Ace of Swords 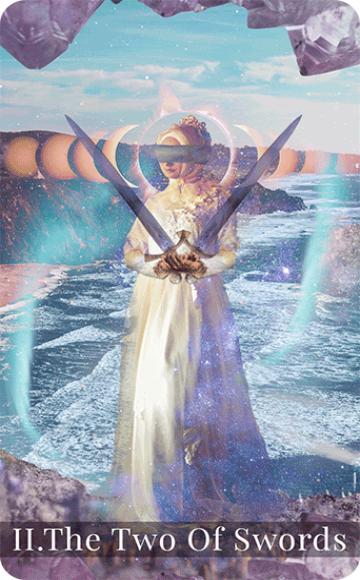 Blind to the truth 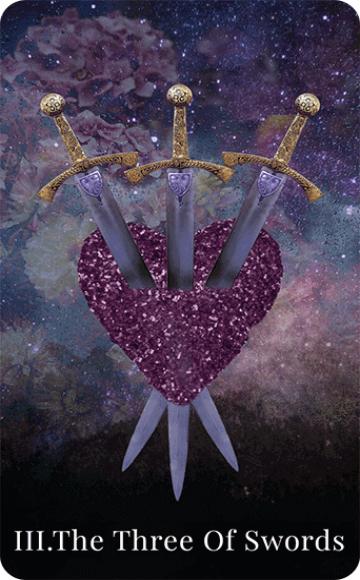 Hurting on the inside

The Three of Swords 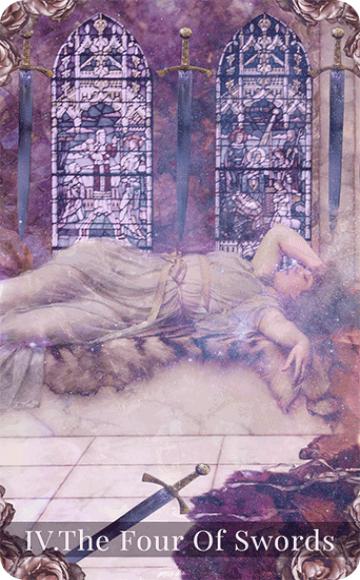 The Four of Swords 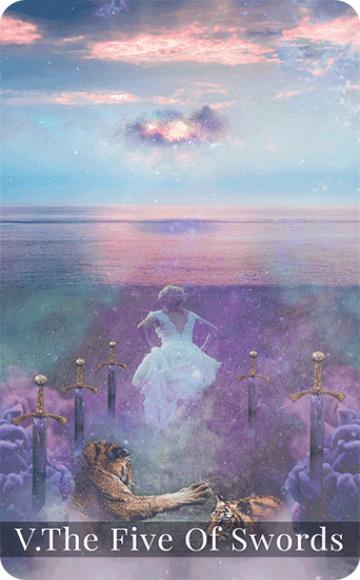 Going for the win

The Five of Swords 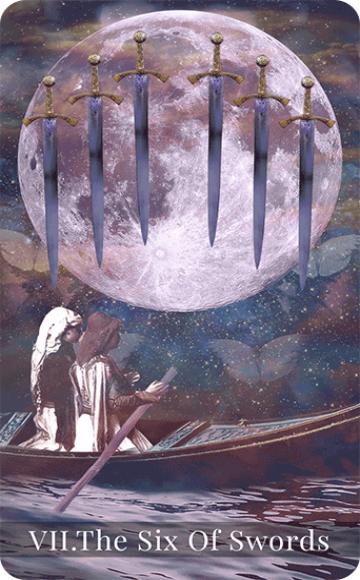 Moving from one path to another

Being ruled by your heart

The Six of Swords 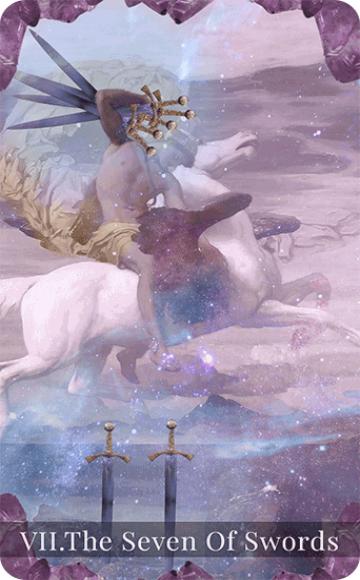 Afraid to face the music

Acting against your will

The Seven of Swords 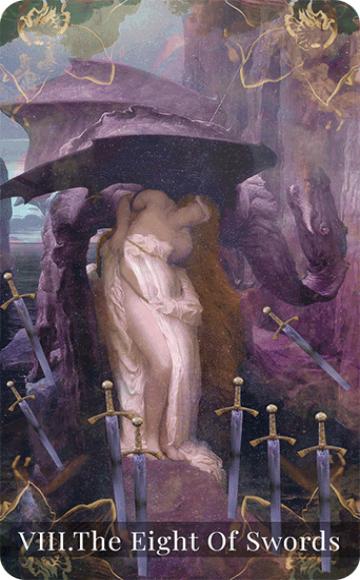 The Eight of Swords 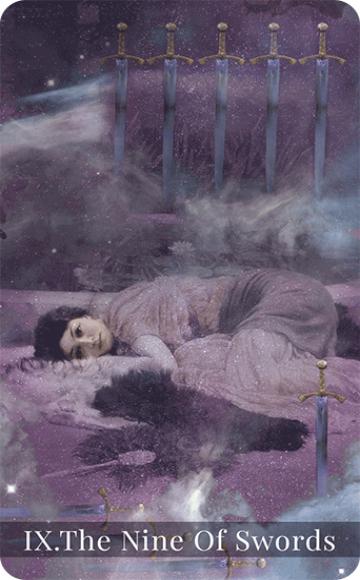 The Nine of Swords 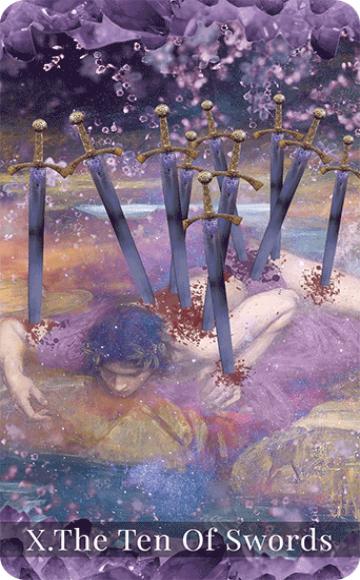 Sacrifice for a greater good

Lack of motivation for success 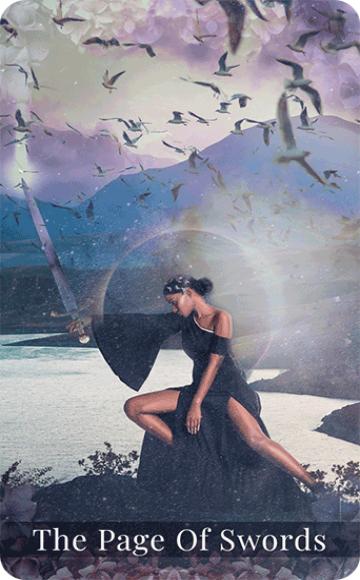 The Page of Swords

Either male or female

Coming up with tactics

The Knight of Swords 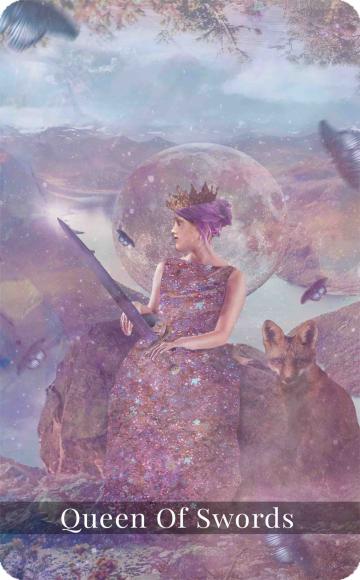 Not afraid of the truth

Learning what you don't want to know 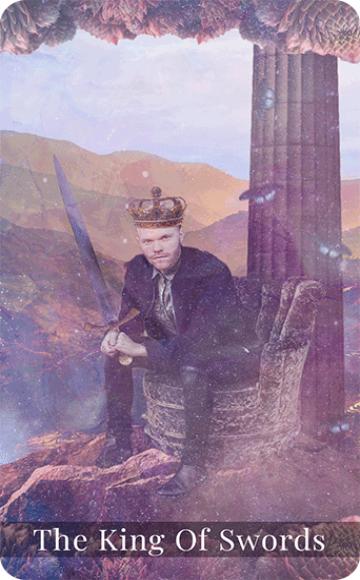 The King of Swords

The Meaning of Swords: the Path of the swords tarot

The Suit of Swords represents the relationship to the world and is the voice of fairness and reason within the tarot. Often the swords will represent words either spoken aloud or thoughts and true to their nature they can be double edged. They are about movement as well as struggle and last ditch efforts before the end of a situation has come to be. Unlike the Wands which are specific to drive, the Pentacles specific to earthly matters and abundance; and the Cups which work with emotion; the Swords are symbolic of the element of Air in the Rider Waite deck and tend to be representative of the cutting influences of all of the suits combined.

For example, you might get a sword card in a reading regarding a relationship issue and the sword will emphasize the communication and the power struggle between the individuals in the relationship. What this means is that the swords, though they are indicative of the element of air and intuition, they also serve the double duty of being the Highlighters of the issue that you are attempting to work through. They are the cutting edge that slices through your heartache, or the deceit that influences your job. They can be symbolic of love, of hate, of right and wrong as well as fear and bravery depending on which card you get and within what context they show themselves.

Many people have a hard time with the swords because they are not gentle. They are cold and metal and there is no getting away from or misinterpreting their meanings. When a sword card appears in your reading, there is no ignoring it and whenever you try to ignore a sword card, matters usually only get worse.

Case in point: Say for example you have pulled the 8 of Swords regarding a matter about love where you are in an abusive relationship and you want to figure out how to make your lover stop beating you. The 8 of Swords says immediately that you can get yourself out of the situation, and should, and that the solution is not about trying to change that person, but removing yourself from the equation so that you can be safe. (The cards are always going to tell you what is best for you in that moment.) The image of the 8 of swords is a woman who is tied up in loose bonds. She thinks that she cannot move but this is not true because it is only her fear of loss that binds her. She could get herself out of the situation if only she allowed herself to loosen the binds and remove the blindfold. This card is very influential and extremely vivid as well as explanatory. It is often misunderstood because it appears that she is bound and has nowhere to go and can help to make one feel even more trapped. The key to the Swords suit is looking for the suggestions within symbolism of the card itself.

Should you choose to ignore that card, the next in the sequence that you can expect to receive would be the 9 of Swords, which is a card of complete reserve and misery. The person in this card is having nightmares about their life, they are getting worse, and nothing is getting better for them. Should you choose to still ignore the advice of the swords then and continue in an abusive relationship, you will move yourself forward to the 10 of swords, the final sequence in a cutting and miserable situation: that of utter devastation. If you were in an abusive relationship you might have then allowed things to get so far gone that at this point your life you have experienced all of the terrible repercussions and you might as well just start over and rebuild somewhere else entirely.

Had you listened to the advice of the 8 of Swords in the first place and made changes to improve your life circumstances, you would never have had to be stabbed in the back metaphorically by ten swords. Keep this in mind when you are working with this suit. It is not always this dramatic, but they do not leave much room for error. “Make your decisions and make them wisely”, say the Swords… “Or I will cut you”. You are responsible for your actions and choices at all times when the swords card are present. This is because the suit deals with those internal thoughts as well as the voice of others. At all times you must remember your own voice in the situation and listen to your instincts, but especially so when the swords are present.

Swords in tarot are associated with pain and suffering.

Here is a quick tarot meaning of each card.