What the Emperor means in a tarot reading?

The Emperor is the counterpart of the Empress, but where the Empress is care free in her abundance, the Emperor is almost strict with his own form of stability and can symbolize many different things depending on the context in which he represents himself.

If you receive this card during a general reading, then the Emperor is going to provide you with a solid, continual energy to benefit your life. He does not leave a lot of room for excess change or random behavior. The Emperor is pragmatic, regal and stately. His energy is full of action and drive, and there is no room for mistakes. This is a card of possession, domination and authority and says that currently in your life you need direction. Often the Emperor will reflect an internal compass, a card that is attempting to show you the way. To be something and to know something is entirely different then being capable of doing something. Embracing the capabilities of the Emperor assists you in understanding this level of authority. Now is a time to trust your own instincts and skills to get a much needed job done. Do not rely on others to complete what you can do yourself. Do not expect that others are going to do as good of a job as you are.

You are in a time of your life that your own limits may be tested and while you are feeling run down or underappreciated you still need to push through. There is no room for error. The Emperor points his glare at you in a reading stating that you also may be pushing others too hard. The message for the card is for you and you alone. You need to be responsible for your actions at this time and reliance on others will likely result in a disaster of some kind.

The depiction of the Emperor on the card is full of metaphorical images that will help you to assist what the role of the Emperor is in your life. He sits in a stone throne that is unyielding but efficient with the Martian ram heads signifying his masculine role with mars. He is forward momentum and drive. How can you focus more on pushing yourself forward? His beard is long, symbolizing his many years full of wisdom. Many comment on his metal shoes. One would ask why he isn’t wearing shoes that are more comfortable. The answer is simple, his shoes are an example of authority, of procedure, they are part of his uniform and that symbol is constant and never changing. You will benefit from adding this level of professionalism in your life.

The Emperor encourages us to focus on the reasoning and critically thinking mind. What is feasible and is reasonable is the world that the Emperor lives in. When you receive this card in a reading, the Emperor commands that you get rid of all form of fantasy and fill your head with the facts. Handle your affairs in a systematic way and do not encourage room for error. Anything that you can do to be responsible for the standing in your life is imperative now. The effort you put in at this time will be greatly rewarded.

The Emperor in Love

In love, the Emperor is symbolic of monogamy, of longevity and consistency. When this card appears in your love spread you can count on being blessed with something stable and dependable coming your way. If you are already in a relationship and you are having problems, the Emperor says that you can depend on the situation to improve and to remain stable at least for the interim. Consider what he has to teach you about being a solid influence in your life and in the lives of others.

This card can be confusing if you are looking for love. For a woman looking for love it will often show an older male coming into her life and instruct her to be open to new possibilities. However, for a male seeking love it tells you that you need to be more forward in your search, be willing to share your feelings, and warns of waiting too long for the right woman. It is likely that you are holding back your feelings to a woman and now is the time to speak up before your opportunity is missed.

The Emperor in Health

When the Emperor comes up in a reading where health is mentioned, several possibilities present themselves. First, this can be a sign of good health over all, that you are well and will continue to be well. However, if this card comes up reversed regarding health, then you will want to consider the negative effects that being overly routine or constricted is having on your overall health. This could show up in tension headaches or other stress related issues. One can be too authoritarian or too rigid. The Emperor is there to teach you to bring yourself back into balance and to allow the positive influence of stability to come to your aid.

The Emperor in Work and Wealth

The Emperor in business ventures exists to show you the support in your current workplace and to bless you with up and coming possibilities that will add more stability in your life. If you are unsure that you are making the right move in your industry by accepting a promotion, the Emperor says to take the job if it will encourage longevity in the workplace. He also represents a long-term opportunity coming your way financially such as in making money off the sale of a house, inheritance, or cashing in of stocks and bonds. The positive energy in this card is very strong concerning finance and work. The Emperor has worked for what he has and with him in a reading, he brings a deal of luck and fortune through experience and reputation. 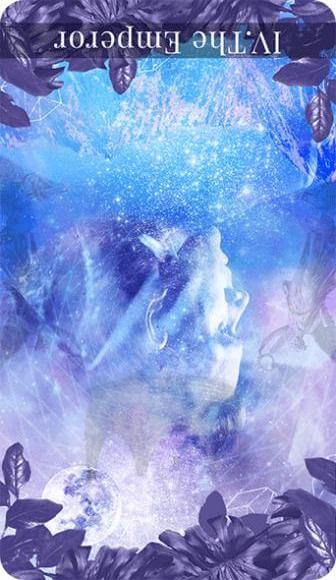 Reversed Emperor in a reading

When the Emperor appears in a reading in the reversed position, there is a loss of control possible in your near future. Perhaps being overly structured has taken a toll on your existence and you have begun receiving injuries due to this lack of flowing energy. Consider taking some time off so that you may be able to get through the frustrating phase. Pay attention to paperwork and ensure that you have only trustworthy people around you. With the positive energies in the reversed position, the energies that would usually be of an aid to you can actually be a hindrance. You will likely find that you are being overconfident or rude and not knowing it. Especially in a professional sense – the reversed position does not bode well for work and finance. Do what you can to get your finances on track by setting up a budget that is reasonable and workable. Work hours that are conducive. Overworking, overbooking, and being overextended are often serious issues when the Emperor is reversed.