The Eight of Cups

What does The Eight of Cups mean in a tarot reading?

The Eight of Cups

The Eight of Cups can be a very hard card to have in a reading.

From the looks of the card itself, you can get the feeling of loss. A man walks through stagnated water and is leaving the cups behind him. The card is dark and the symbolism represents that he is moving on by his own accord. The water around you right now is stagnant like that which the person in the card walks through. There are murky if not unhealthy emotions in your life and you need to do what is best for you. Often, especially because this is a cups card, it is exceptionally difficult to go through this card because at one time the pools that were around you were wondrous, creative, and positive energies that have now died down.

It is interesting to note that while the blue representing spirituality or emotional issues is still present, the colors are darker. The issue in your life is not an easy one at this time. The card usually comes up during a time of loss and often this is revolving around a relationship of some kind. There is darkness to the card that in turn will usually represent aspects of your life right now. This card represents less of holding on to the past as it is a fear of moving forward. This is something that you need not fight as really, where else are you going to go? Now is the time to seek the higher road for your own health and sanity. It is obvious when this card comes up that you have tried your best and you have taken the steps to make the right choices for you. In the end you cannot change the past and you must accept what is in the present. Our lives are not stagnant things and while the energy around you may be turning sour, it is up to you to save yourself from that around which is unhealthy or holding you back.

The Eight of Cups vibrates the same goals and lessons of the Hermit card. It is sort of like the beginning of the Hermit’s journey where he heads to solitude to seek out wisdom and understanding. With the Eight of Cups, there is a spiritual sense to the card and the search you could be heading on is one of wisdom, but not wisdom alone. The path you are heading from, even though it did not end well – you will gain knowledge from this strife and grief. Little help is that now while you are still feeling the effects emotionally but with the card coming up now it also appears that you are doing what is best for yourself (or that you will). That can be a lot and later when you look back on this time you will know that you did all that you could.

The Eight of Cups in Love

Since the Eight of Cups is in the cups suit, it is often referring to relationships. In this case, unlike many other cup cards, it isn’t all good. In fact, it’s a pretty negative card for a relationship reading of any kind being that it shows a lack of positive energy in your current relationship if you are with someone. That doesn’t mean that nothing can be saved, but typically it will reflect a very bad place. The stagnation of the card shows that there is no real way to rekindle the fire of the relationship or that the well is poisoned. What has happened in the relationship is something that usually won’t be bounced back from. There are cases when the relationship can be salvaged but it usually indicates a need to start from scratch or that there will be a break up and then time will pass before any hope can be had for the future.

In the case that you are looking for love the card refers to a place for you now that is not one that is truly ready to be in a relationship. You appear to still be moving and healing from a past relationship and you have a bit more work before you are in the right place to start something new. The Eight of Cups in health means it is now is a time to focus on your healing. Not always but usually, the Eight of Cups will come up when there is a known health issue that is especially trying such as a cold that has turned into pneumonia, mental illnesses taking a turn for the worse, or any other health that continues to wane. There can be a sense of increased worry or anxiety over health which will continue to exacerbate the problem. It is important right now to break routines and buck the system. That doesn’t mean to stop following doctor’s orders, but rather… you need to be more compliant and find the desire to get better.

Often with this card there will be a sense of dwelling on the negative which is unhealthy in itself. Work on finding out all you can about what is going on with you as education is the best defense. Take time to focus on the positive in your life and the reasons that you want to be healthy. If you are feeling that you don’t trust those around you, get a second opinion. Do what you can to get in a better place mentally about your health so that you can be in a better place for healing physically.

The Eight of Cups can also refer to negative mental states and increased depression or psychiatric breaks. Since the card comes up often in very trying times in a person’s life, it can also be a difficult time emotionally. The card offers the advice that what you are going through right now is not permanent. Remember that you are not alone in this journey and if you choose to open up there are likely people around that can help and support you at this time.

The Eight of Cups in Work and Wealth

Financial losses and job losses often accompany this card, not because of bad work or poor financial judgment, but because of economy, poor business practices overall, or mismanaging money on a large scale (like in the case that your IRA or 401K made a bad choice with YOUR money). Now is a good time to take a look at your work and finances and get the facts. Know what is going on around you and be prepared for any negative changes that could end up affecting you negatively. Be smart with your finances and keep tabs on what others are doing with your money if they have access. Also, for the person looking for work, be mindful to look at all available career options that you can. Usually job issues – whether losing a job or seeking a job – are most effected by issues of layoffs and economy with this card and it can be a tough time in finding solid footing in work issues. 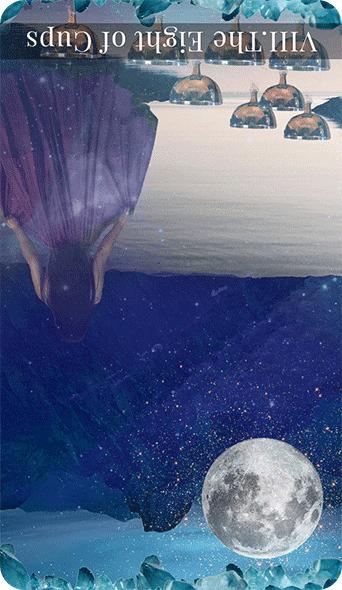 Reversed Eight of Cups in a reading

The Eight of Cups in reversed is almost a positive card. It does still represent loss, but the loss that is felt is not as deep. While you may find that you are walking away from something in your life, the darkness is not present and the view is bright. It is likely a move for the better on your path and one that you can feel good about. Even if you are feeling sad about moving on, know that the progression you are making now is for the best.