The Nine of Wands

What does The Nine of Wands mean in a tarot reading?

The Nine of Wands

If you have received the Nine of Wands in your reading you will be receiving a strength of vision that you never thought was possible in the past.

This vision is going to be equally balanced with emotions, spirit and physical health. You are making the right choices for yourself. You have gained much knowledge from what you have been through and now you must establish a certain level of mastery. As a part of this mastery over your reality, you must hear what others have to say so that you can gain multiple perspectives which will help you make better decisions, choose better roads to cross and will teach you a tremendous amount about yourself.

In the Rider Waite Deck, we see again, the fellow that has been fighting all along the Suit of Wands. His wounded head indicates that he has been through a struggle in order to protect what he loves and even though he is tired he is prepared to fight some more. He is protecting a boundary made of the previous 8 wands. This means that right now you are in an intermission as far as the struggles you have been pursuing to get through to your initiatory phase, so you must regain your strength after resting and regrouping and speaking to others about what you should do. There are those in your life right now that have excellent advice to offer you. You must not be stubborn in this moment because you will benefit greatly from the help should you choose to accept it. The 9 of Wands says that you should accept as much help from genuinely helpful people as is possible. Remember this is a card of fire, but consider this moment as a time to gather more fuel so that you can burn brighter than ever.

The Nine of Wands is a card of self respect. The man depicted in the card is not afraid of losing, instead he has enough faith in himself and in his cause that he is willing to die for it. Obviously the card does not suggest that you go the lengths of having to die for a cause, but in this case, the willingness to be uncompromisable about your values is an important aspect of developing a strong sense of self. In this fiery phase a sense of self is extremely important to the overall success of your battle. If you are going through a hard time right now where you feel that you can’t go on, please know that the Nine of Wands is saying that you have already come far, that you have done well and you only have a little bit farther to go.

One of the best ways to prepare and win a battle is to give your body a chance to develop its muscles. In this you should consider your emotions, your physical state and your spirituality all separate bodies whose muscles need to be tones and strengthened. You have a huge amount of charm and attractiveness to both sexes, so you won’t have to worry about or fear not getting attention, but you need to focus on yourself, on your personal journey and on the work that you have yet to do.

The Nine of Wands in Love

In love, the Nine of Wands portrays you as someone who is very attractive to both sexes. Anyone who has fought as hard as you have, will have a certain kind of ‘extra’ physique about them that will send out signals to other people letting them know that you have a strong and good character. The light that you radiate illuminates all that is dark around you, and will attract many people, somewhat like a moth to a flame. However, for you, the love that you must illuminate needs to encompass not only yourself and those that love you, but you must also challenge yourself as part of your learning to love those that you find thorny to deal with. Embrace the people who are making your life difficult. You will have no problems in love at this time, but right now you must focus your attentions on bettering your circumstances so that you are ready for the final phase.

The Nine of Wands in Health

When the Nine of Wands appears in your spread regarding health there is going to be some level of anxiety and worry that you are going to have to push through. There is heaviness and a fear of losing grip on what you possess in your life. Whether that is love, possessions, money, or relationships, the Nine of Wands gives you hope because it is lending you the strength that it has and it is orbiting all around you to help you.

The Nine of Wands in Work and Wealth

Now is the time to protect the work that you have started and create a savings from it. When it comes to money and abundance, now is not the time to be frivolous. You are protecting yourself by buying insurance and making sure that if anything should happen that could create a financial bump that you are prepared to handle it. But you should not spend randomly. You must take care of what you have now so that you will have later when life gets rocky again. On the card shows a person that has been hurt in the past at work, maybe corporate bullying. This card can imply putting up a barrier and protecting yourself. In some instances, it can also suggest being paranoid. You need to have faith and keep on going. The person in the card I would say represents yourself carrying a burden, he can build a fire with those wands and fight his position, but he is wounded. There is a focus that you can overcome obstacles when this card is drawn in a work position, you may be hiding under a psychological wall and in the past suffered pain at work. This card also indicates that a goal is out of reach and this is a good outcome at work. The number nine is Eremita which represents knowledge and wisdom at work. The card also focuses on patience, sometimes doing nothing is defensive in itself. The card is also about moving when the time is right, to get to the end goal. Sometimes doing nothing or delaying in life is better than taking action at the wrong time. 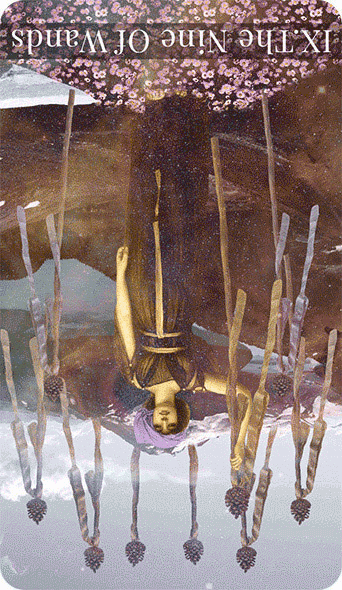 If you have received the Nine of Wands in the reversed position in your reading this means that you are going through a phase of feeling defeated because something has happened to make you feel that your defenses, the ones that you worked very hard on, have failed. You have burdened yourself with problems that are bigger then you can handle and you feel weak and incapable of holding them back. Why are you giving away your personal responsibility? The Nine of Wands exemplifies that you are in control of your life and your reality; therefore, nothing is happening to you that is out of your control. Right now you just feel like it is because it is easier than admitting that you need to start over again. It is challenging to go through this because you have already risked so much. But the Nine of Wands assists you in being fearless. You must push yourself to continue the fight or you will lose to it.