What does it mean when your nose itches?

What does it mean when your nose itches

Superstition, mystics and meaning of an itchy nose

Everyone suffers from common itches on the nose. But, what does it mean?

When your nose itches or twinges there is old folklore predicting your future. If you have visited my site before you will know how much I love old folklore and have a library of over 1000 books dedicated to old superstitions and dreams. I will now round up the folklore in various books (sources below) about itchy noses so that you understand the true meaning. In one book, they actually had a description of the area of nose itching and what it means which I have drawn below.

Where does the superstition of the itchy nose come from?

In order to answer this question, we need to turn back to 1620 where there was a quote “That when a man’s nose itcheth, it is a sign he shall drink wine” Melton in his magazine first talked about itchy noses, his magazine was known as the Astrogaster and on page 45 he noted that an itchy nose predicted seeing a stranger. 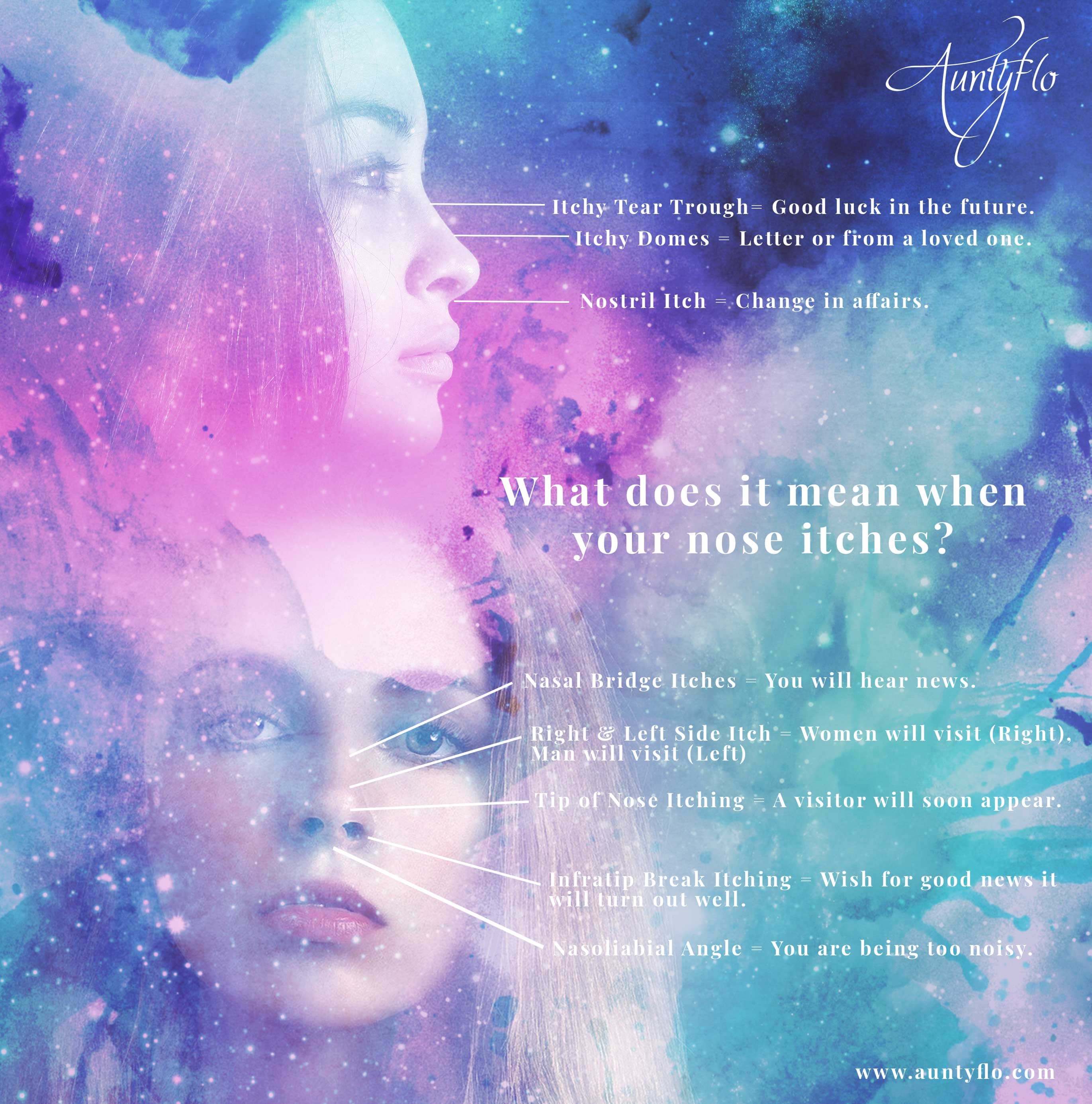 What are the general superstitions around noses?

From my research, there are around 100 superstitions that relate to your itchy nose focusing on communication skills and relationships in life. The most prevalent is that if you have an itchy nose, it means you’re going to develop a conflict or an argument with someone. Ready for some more famous superstitions? Here are the popular ones:

What does it mean to have an itchy nose?

An itchy nose is a problem that affects millions of people throughout the world on a daily basis. They might be some additional emotional characteristics that have resulted in if the nose keeps on itching. Maybe you spent endless nights with an itchy nose, there are many different reasons why you may have such an itch. For example, some people have eczema.

My partner has eczema and I know full well that he often suffers from the itchy nose. Especially if his allergies are also causing him problems. It terribly allergic to cats and dogs, and if he enters the house of somebody who has any of these animals it feels like pepper is in his nose. This consequently, triggers a vicious cycle of sneezing.

He told me a funny story once that when he went on a date he was allergic to the women’s hairspray. He spent the whole date with an itchy nose. Obviously, there is drugs such as antihistamine or steroids which can alleviate flare-ups of itching. Scratching takes a whole new perspective on the itchy nose. If you scratch your nose this can signify in older folklore that you are scratching the surface of a problem. The itchy nose, can also if constant be associated with an infection. Perhaps you got an infection of the sinuses? It could be “Staphylococcus aureus” or something that requires strong steroid ointment.

What is an itch on a nose?

Interestingly, there has been little research into itchy noses. There is no treatment for the itch, apart from painkillers. The official term is pruritus. In fact, there was even a foundation that was dedicated to the basic foundation of an itchy nose. The doctor at the heart of this was Gil Yosipovitch. In 2013, IFSI held a conference on itches can you believe! I am not sure the fact that the end of this scientist’s name (itch) has anything to do with the fact that he was focused on understanding itches per say. He was focused on studying itches and was particularly interested in being bitten by a mosquito. There are some diseases relating to itches.

In one book, apparently, the legend is if the nose is itching then you’re going to kiss somebody shouldn’t. There are so many different legends and perspectives around an itchy nose. Of course, the nose itching can be due to a number of common problems. In the books, I have old wives’ tales about the superstitions dedicate whole sections on the itchy nose. For example, the top of the nose denotes a letter will come in the mail. Well, as we get letters most days this is nothing unusual. Another “general” superstition is around quarrels with people. This is not positive. Another meaning is that money and wealth will be yours. Yes, I will go for that one!

What itching means on the left-hand side of your nose and right-hand side.

Believe it or not, there are superstitions around the two sides of your nose. For example, on your left-hand side of your nose man will visit your property soon. And on the right-hand side, it is supposed to relate to the fact that you are likely to count in love and honesty in the future.

There seems to be a correlation to itchy noses in different countries and cultures. For example, in Wales, itchy noses indicate that a new job prospect is on the horizon. In it she knows in Venezuela predicts gossip. People are saying good things about you if you have an itchy nose according to French mythology. Itching itself, overall, it’s quite a favorable omen on the different books I have read. Many different superstitions also do note that an itchy nose can suggest that the decisions to be made soon.

What are the health solutions for an itchy nose?

You might have an itchy nose for multiple different reasons such as having allergies. Or common cold. In my experience, you can also develop itchy nose if you inhale specific irritants in the air such as chemical fumes, pollen, dust or certain perfume. I know my nose sometimes itches when I eat spicy food. At times, being exposed to harsh weather can also result in an itchy nose, along with bacterial infections and rhinitis. There are many different ways to removing an itchy nose, this can include nasal sprays, antihistamines or alternatively paracetamol.

There are also saline sprays that can clear the nasal passages. Antihistamines are generally considered the best course of action when you have an extremely “itchy” nose. For external itching tropical creams for eczema, including steroids are hydrocortisone is ideal if you’re finding you have various itches on the nose. If the nose is painful in any way, the old folklore states that a painful nose indicates that people are talking about you. I will say, however, it is probably better to seek some medical help if your nose suffers a prolonged sense of itching.

What about a persistent itching in the nose?

I’m not saying that this is the reason for your persistent itchy nose, but I will share a rather disturbing story about a woman who lived in Selvi. For a long time, she kept getting a tingling and itching feeling in her nose. This 45-year-old woman eventually went to the doctors. After an X-ray, the doctors discovered the cockroach was sitting between her eyes and the most gruesome part is that it was actually still alive. Dr Shankar, who was the doctor of ENT at the Government Stanley Medical College. This doctor said that he has never seen such a thing.

They performed emergency surgery and the cockroach was removed. The cockroach was finally removed with some suckers and it could have created an infection that you would have affected her brain between the two eyes.

Gross right! If you notice someone persistently itching their nose who wears glasses watch out they are not a spy! There was some scientific research carried out where people’s fingers (moving, flicking and pushing) the nose can control a computer inside an eyeglass frame. So imagine that!