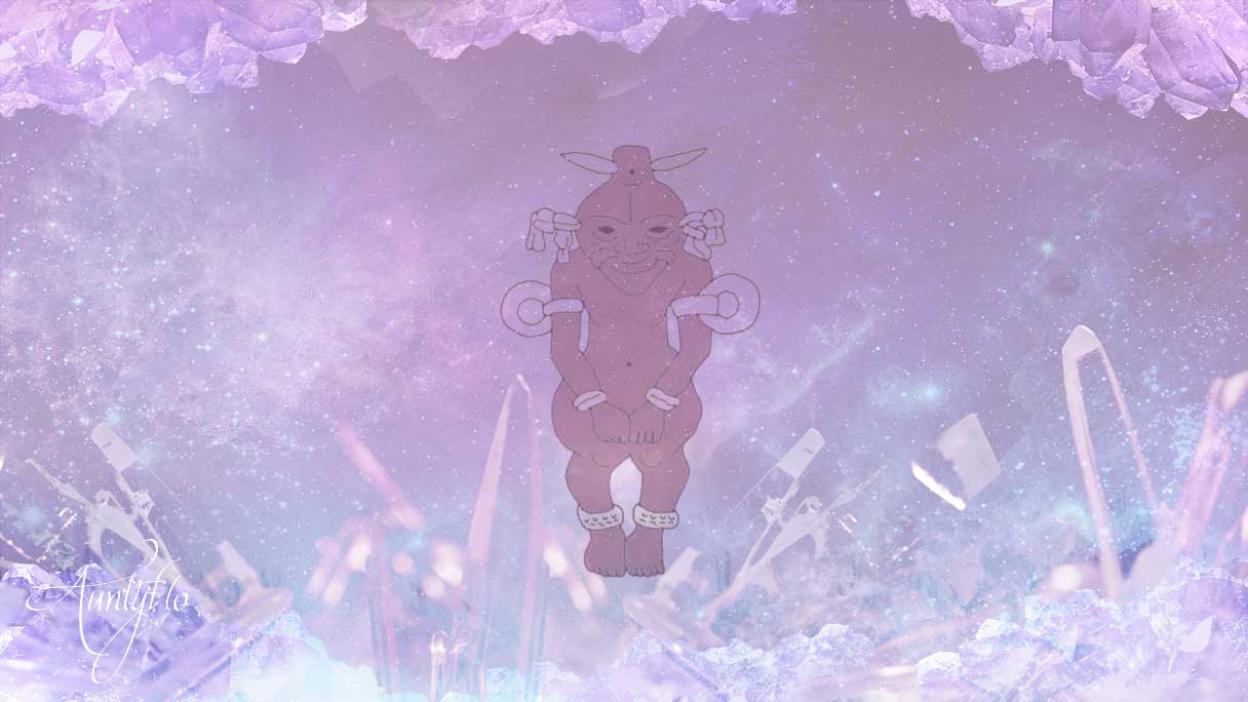 This curious wooden figure is worn, suspended round the neck, as a talisman, by the natives of New Guinea.

It is supposed to terrify and scare away evil spirits. It is also a charm for happiness and is believed to protect the wearer from illness, for the natives believe that illness is caused by a bad spirit entering the body. They are taught by their witch doctors that nature is full of evil, and good spirits, and much of their time is spent in pacifying the good spirits, and frightening away the evil ones. These small figures are normally found in wood, bronze, marble and terra-cotta. They are often created using a lower form material. There attention to detail is important, to especially show the expression on the fact.

There has been reports that some have even had hunchbacks and are probably made to stop the evil eye. Each of the figures is distorted and that the we are can ensure that they are protected from any evil spirits. It has also been associated with preventing dark spirits and forces. This charm is smiling which means that there is a positive aspect to this grotesque figure. They also believed that this talisman protected but also gave happiness to the wearer. In this modern world the figure is not worn anymore. surprisingly, witch doctors use to use this figure to try to remove bad spirits from other beings. It is associated with the astral world and subsequently is associated with frightening others. We have focused on just one of the famous talisman's but there are many more grotesque figures that are worth a mention.

Much of the discussion on these lucky or protection talisman or charm's centre's on the issue of why we need to wear them. One clear reason is that if one does not then it can be dangerous - or break the good luck one would have, since individuals pertain to rely upon our keeping promises. Hence, they are damaged or deprived by by not wearing the figures, which could result in bad luck. This does not appear reasonable in this day and age. Another interesting talisman is known as Bulla. This is the name of a case which is golden and heart-shaped. This is normally found on lockets or used individually as a necklace, often affixed as an accessory to a belt or badge which was put over one shoulder and also under the contrary arm. This talisman was associated with being victorious. It was used in many processions. This was worn to protect against the evil eye, the wicked look of envy.

As a idea, wearing of such figures could just be recognized within a African (hoodoo) context. Analysis of various traditions from Western cultures are few and far between. Let’s first look at talismans generally, these are amulets which are either figures or are engraved with characters to influence, protect or bring luck. Talismans are slightly different from an amulet because an amulet you generally put around the house. However, a talisman is worn on the body. There have been some odd customs of touching, kissing, or waving at the talisman before putting this on the body. Many talisman’s are in the shape of an open or closed hand. This is normal a charm which protects against the evil eye. It is known as Fatima’s hand. Additionally, charms shaped as a heart is normally a symbol of love. However, moving onto grotesque figures and how these have been specifically used in charms, one would assume that the protector or figure that would bring good luck would be a nice looking image. So why are some talisman’s so grotesque? It is thought the terrible look of such a figure would frighten evil spirits.

The most famous of grotesque figures has to be the gargoyle, which in architecture is designed to frighten away evil and often found in churches across the world. Strangely, some of these were built to dispel rainwater from the roof. There is folklore in France about St Romans who was made the bishop of Rouen. He was suppose to have frightened a dragon with a crucifix, this was led back to Rouen and then burned but its head was not. Then this was affixed to the walls of the church to scare evil. Also, this dragon was used for protection against anything in the town that was negative.