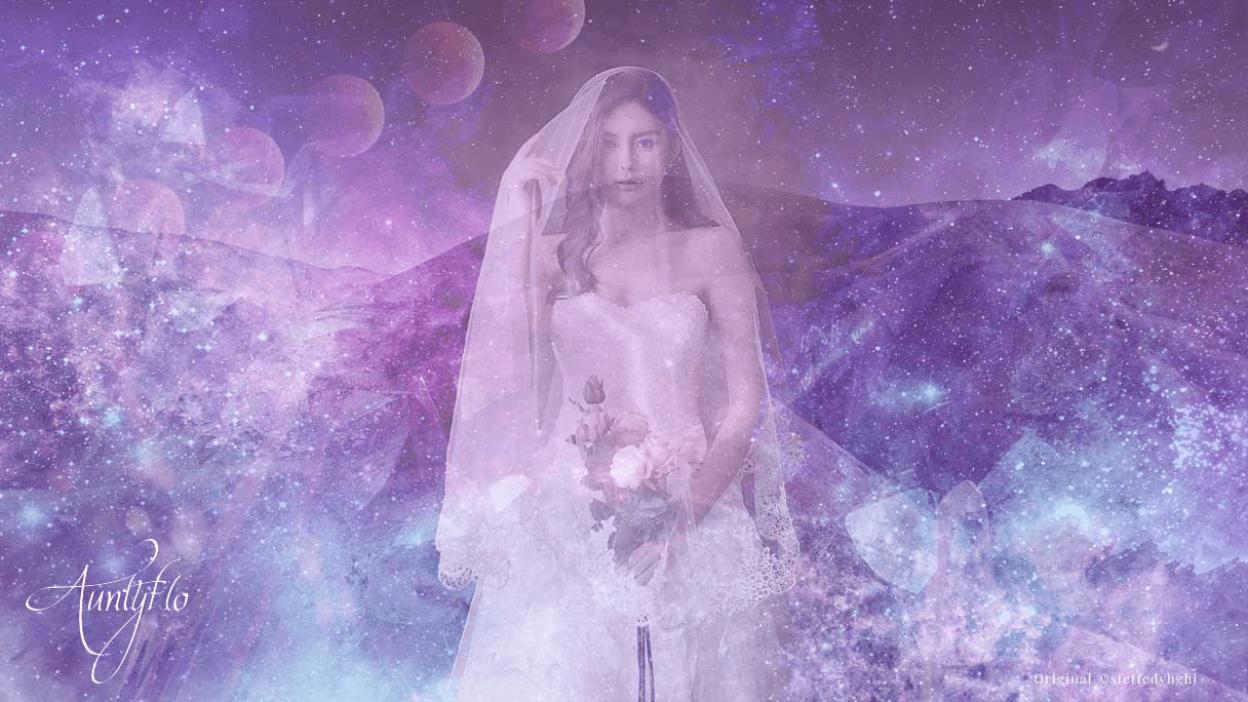 Here I detail all the bride superstitions found in many ancient books.

There are many superstitions that have been recorded over the centuries, also in different religions - here we try to cover them all. In this article, you will find an overview of the general superstitions found at the wedding, characters that are traditionally found including their roles. We will then move into specific superstitions for the wedding, ancient through to modern. There is over 100 wedding superstitions included in this article. For the bride to wear white is based on the ancient symbol of purity and innocence namely the virginity of the bride. If the bride decides to wear another color it is custom to wear a silk fabric instead, to attract fortune. Satin fabric should not be worn and the reason is not known. Velvet is also not to be worn as it can suggest that it is associated with poverty. Pins left on the wedding dress is a bad omen. Pearls are normally worn as they are good luck symbols. Definitely worth a read if you are soon to get married.

Traditions of the maid of honor Firstly, the name maid of honor is the title of the queen's personal assistant. As a bride is essentially the queen on the day of the wedding the name was given to bridesmaids or the maid of honor. This is the closest person to the bride who helps dress her and prepare for the wedding. The main role of the maid of honor is to help dress the bride, hold the bouquet when required. A junior bridesmaid is normally under 16 years of age. There are many superstitions around the color hair of the bridesmaid. It has been a long tradition that the hair color is significant. Copper colored hair / red hair was often consisted unlucky. This was because it denotes an annoyed person who preferred conflict over peace, the red was also associated with the devil and traditionally those that bore such hair color should not be trusted, obviously, in modern times, this is discrimination but a popular superstition from the medieval times.

During this time people of red hair were also seen as witches and not to be trusted! This is rather shocking I know. If we look at the gypsy superstitions red hair was, however, good luck. The bridesmaid is also supposed to hold the bride’s left hand before she walked down the aisle to denote good luck to the partnership. The superstitions of the groom We now move onto the groom! traditionally it is custom for the groom to hold a stag party. This was a tradition since the fifth century. It was originally just a dinner party with family members, then extended to friends and a meal was held in the honor of the groom on the night before the wedding. In modern times the bachelor and stag parties are always done before the wedding date, often weekends away. Groomsmen The groomsman is a term widely used for the “right-hand man” it is from the “bride knights” thus, the groomsmen use to protect the groom and bride in case there was conflict or the family did not approve.

In New England the United States the kidnapping of a bride did happen therefore, the men would protect the union of the bride and groom. Some churches even went to far as to have a hidden room so the ceremony could take place! The best man always has two roles in the ceremony there were a) to prevent the bride from being kidnapped. b) to protect the rings. It is a tradition that both the groom and best man wear the same outfit, in the same color to protect against evil. The best man was also a force against anything that would stop the wedding, including if the bride changed her mind he would enforce it! A bit different from our modern day role of the groom. A flower girl Traditionally, in both Greece and Roman times there would be a child carrying a basket of herbs, she would appear before the bride entered the church. She would scatter these along the aisle before the bride walked. Each herb had a significant meaning and the herbs chosen for good luck.

Rosemary, sage, lavender and ivory roses would be scattered on the isle. Traditionally, these have good luck properties. If we look back to Elizabethan times the flower girl would spread the flowers to beautiful music, she would also visit the bride's home before the ceremony and spread the herbs on the carpet while the bride got dressed. Normally, the flower girl would be between the age of 3-9 years old. She would also have a small basket of rose petals that she would throw outside the church as the bride exits the church. Each rose denotes a different meaning: Orange: Happy marriage, Green: youth, Red: deep love, Pink: sweetness and happiness, White: pure and innocence and finally yellow which indicates fertility.

The flower girl often carried the bride's cup. This was traditionally made from gold or silver and had rosemary inside which was tied together with ribbons. The rosemary was given to guests as trinkets of thanks for attending the day. Many guests dipped this into their wine in the celebrations. White dresses would be worn by the flower girl, as well as many flowers around her hair. This girl was the last person to walk down the aisle. Ring pillow and coin bearer We have already provided an overview of the best man carrying the rings during the ceremony but the actual ring presentation has differed throughout history. For example, during the victorian times, the ring would be found on the end of a sword. More recently, a pillow would be given for the rings to be presented on. The rings bearer would normally wear white lace, matching the groom's outfit. In ancient times there used to also be a coin bearer his job was to carry coins down the aisle.

These coins would be thirteen gold coins and four silver to represent riches to the bride and groom. During the time, the coin bearer has since diminished. Day of the week to get married? The day of the week to get married has separate meanings as follows: Monday for health Tuesday for wealth Wednesday best day of all Thursday for losses Friday for crosses Saturday for no luck Interestingly, the majority of people get married on a Saturday. We will now briefly review the best months to marry and the superstitions surrounding these months.

You may wish to review these months to determine the best time to marry. January - Marry when the year is new, he will be kind loving and true. When February birds do mate, You wed nor dread your fate. If you wed when March winds blow, joy and sorrow both you'll know. Marry in April when you can, Joy for Maiden and for Man. Marry in the month of May, and you'll surely rue the day. Marry when June roses grow, over land and sea you'll go. Those who in July do wed, must labor for their daily bread. Whoever wed in August be, many a change is sure to see Marry in September's shrine, your living will be rich and fine. If in October you do marry, love will come but riches tarry. If you wed in bleak November, only joys will come, remember. When December snows fall fast, marry and true love will last. Famous wedding superstition The most popular superstition is definitely the saying: Something old, something new, something borrowed and a sixpence in your shoe. Additionally, the more modern saying is: Something old, something new, something borrowed and a something blue. So what does this mean? Something old is normally a garter that another bride has given as a gift.

This is the tradition, especially from happily married women. The something new can be the wedding dress or anything that the bride will buy that is new. Something borrowed is normally a necklace or ring borrowed from the bride's mother or someone close to them. Finally, placing a silver coin the bride's shoe is to ensure the wealth of the union. Popular wedding superstitions: