What does Grace mean in a girls name? 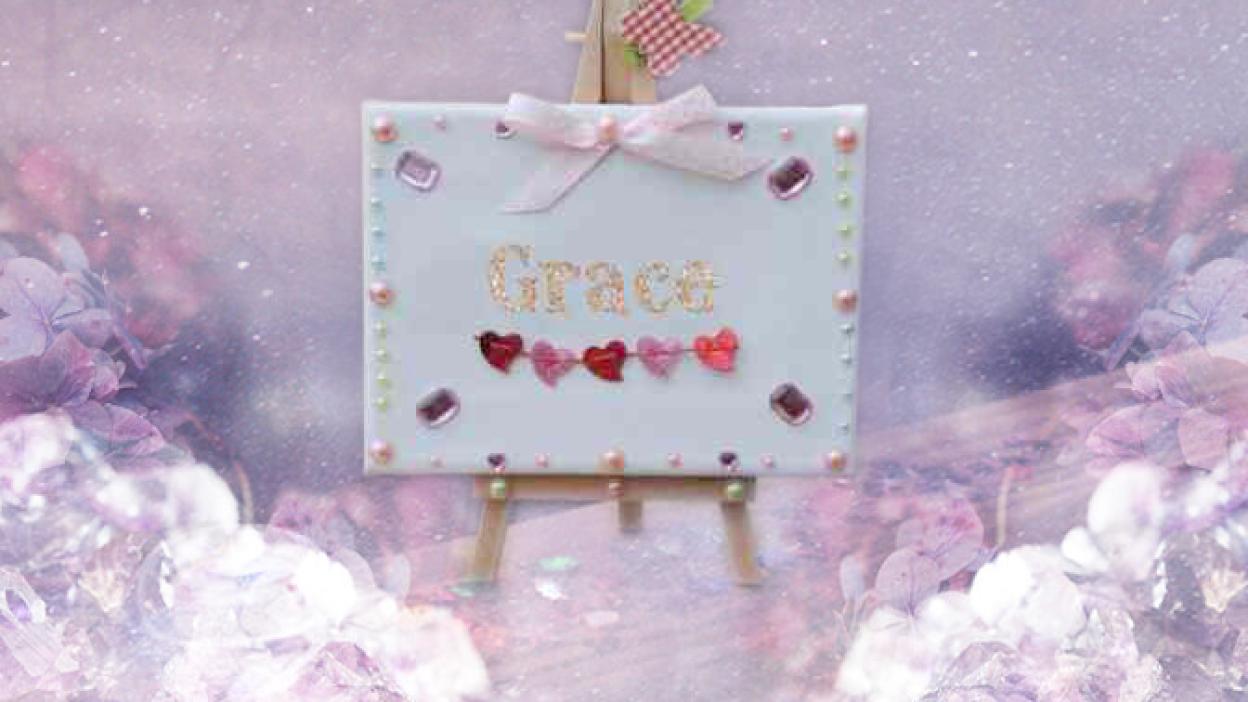 Grace is used in the English language, it is a popular name. It means love. Its origin is Latin. Gratia (Latin) is a form of Grace.

The meaning is from the 'grace involving God'. The name, amid other names, was used in the 17th century. The name strangely had a big popularity boost during the 80s because of Grace Kelly (1928-1982). It's stated that numbers hold the key to our innermost personality. Each letter inside your Christian name has a number equivalent. Everything in life can be reduced to a number, and each number has a meaning. In numerology, this meaning is converted into a useful tool for understanding our innermost secrets. Read on to learn what Grace means in spiritual terms.

Detailed meaning of the name Grace

Graced is featured in many religions. There is the Christian and also the Buddhist takes on the name meaning. The name is connected to the ability to attain spiritual development in life and that this should not be lacking in human beings. If you're lucky enough to be called Grace then look no further. Grace is one of the top names for baby girls, it comes from gratia which is the Latin term for "grace".

Grace was a super popular name in the Middle Ages and comes devives from the name Gracia. However, it wasn't often utilized until the Puritans adopted the name along with other Cristian terms in the 16th century that it became popular. It was utilized as a virtue name, associated with the kindness and love of God. Who would have thought such a pure and simple virtue name as this could ever become popular?

It originally referred to divine grace which is why many famous people such as Christy Turlington, Mark Wahlberg, and Ed Burns have chosen this name. The name is a bright and elegant name that usually reminds people of the elegance of the Princess of Monaco, Grace Kelly. It was embraced during the Victorian era by American. Also, it was the 11th most popular name in 1875 in the United States of America.

And not only then, but this name is also still popular today in America and other countries including Australia, Northern Ireland, Scotland, Ireland, Canada, England and Wales. The variation choices include Graziella or Engracia. Also, if you're looking for a male name, consider Grayson or Gray which is similar to Grace. Gracie is also a popular nickname for the birth certificate.

What Does The Name “Grace” Mean?

This name is an English name which comes from the Latin term gratia. The meaning of this name is associated with God's favour. One of the popular people named Grace was the Princess of Monaco, past American actor, Grace Kelly. Some people claim that the word “Grace” in Ireland folklore means “love” while others claim it's a Latin name which means grace. In general, the name Grace represents positivity. It's also a representation of elegance, beauty, calmness, and inner peace.

What is the Biblical Meaning of Grace?

I do like to review what names mean from a biblical sense. The name grace represents a theological term you can find in different religions. This name has been defined as the divine impact which works in people to sanctify and regenerate. In the bible the theology of Grace means to love and have the mercy of god. Grace is mentioned 171 times in King James version.

This term has an influence which works in people to boost strength to endure pain and resist temptation or to inspire good impulses, faith and spread positivity. Grace, biblically speaking represents the strength or help provided via the Atonement of Jesus Christ. Also, grace represents a present from God provided via his child, Jesus Christ.

This term “Grace” is used in many scriptures. It's also associated with the spiritual healing and power offered via the love and mercy of Jesus Christ. Grace the term - represents the mercy and love given to people by the Lord because the Lord wants people to know that he cares.

This is according to Western Christian theology. It's also believed that Grace is for the undeserved, and the term connects with how people are attracted to their faith. Grace symbolizes love, divine favour, and clemency in the bible.

What Does A Boys Name Of Grace Mean?

This is somewhat unusal, but there is a boys name that means Grace. This is normally Grayson or Gray, which I have mentined before. To be fair, in my research the name Grace is suitable for both girls and boys - unisex. Grace represents kindness, gentleness, beauty and elegance.

Other names that fair a similar meaning are: Nancy, Hannah, Anne, Jane, John, Ian, Shane, Evan, and so on. They're also very popular and have positive symbolism. Original baby names that mean graciousness or grace include: Siobhan, Sian, Anouk, Amara, Esmond, Milan, and so on. These symbolize kindness.

These names mean the grace of spirit and personality. John is another popular name which means "The Lord is gracious".

If you like the symbolism of grace or you're searching for a baby name that will inspire graciousness and grace in your baby, choose Grace. It's a popular America name.

How Popular is Grace?

Between 1880 and 2006, this name was in the top 1000 most popular names around the world. The average age of the individuals' named Grace is often around 66 years.

Grace had huge popularity around the 1880s. Afterwards, this trendy name became less popular but regained its popularity at the early beginning of the 2000s. In the 1890s, the percentage of individuals named Grace was 1.218%. This was the highest percentage back then. In 1883, it was ranked as the 13th most popular name in the world.

Women named Grace around the age of 40 and 60 had the popularity ratio of 33 and 38%. People aged 20 to 30 years had a rate of 24 and 31%. This name is beautiful and elegant. It's one of the most popular names for a reason. Claire and Sarah were the two most popular names for 2016. They're also beautiful and elegant names but not as elegant as Grace.

Grace has a Latin origin. It comes from gratia which represents "grace." Grace existed in the Middle Ages as Gracia but it wasn't commonly utilized until the Puritans accepted it along with different Christian attribute terms in the 16th century.

Grace was ranked 24th on the list of most popular female names in 2018 which represented 0.4894% of female births in the United States of America.

Gracia in Spanish, Grazia in Italian, Grazie in German, and Grâce in French. As you can notice, this name doesn't just have different variations but also different meanings.

Grace has an expression of number 7. This is great as it is basically a hallmark of a great mind! The expression number of Grace is 7 which means that people named Grace are fast learners, great at understanding and analyzing people. They're also very mysterious. Individuals named Grace are teachers, scholars, philosophers, psychiatrists, mystics, and authors. They live inside their mind too much.

Grace is from a personality viewpoint considered calm and quiet. People who have the name Grace are considered introverts. When encountering problems, they always focus on the bigger picture. Grace named people rarely make a bad decision or act recklessly.

The soul urge number of the wonderful name of Grace is 6 which means that people named Grace (if this is yourself or your child) have a deep inner need to be loved. They wish for a loving community, friends, and family. Also, they want to feel appreciated and loved which often leads to disappointment.

In terms of numerology, the personality of the name Grace falls under numerology number 1 which represents a strong desire to lead other people. It's also the number of independence.

You may have dreams and goals. And they're aware of their qualities and attractiveness. If your name is Grace, you're probably very ambitious. Some people think of you as a visionary.

You're humble but also highly-motivated by success and money. You're not money hungry like most but you like the security that comes with money.

Self-love is what you promote the most! You encourage people to love and accept themselves. You're a walking inspiration. And you're often tired.

However, you're good at hiding how you feel. Sharing feelings with others isn't your thing. You don't like to complain or share your issues.

The personality of Those With Grace Name

The symbolism of this name is pretty interesting. As I already mentioned, this name exists in different cultures and languages. It has many variations. And many meanings. However, all the meanings are associated with the same traits such as elegance, kindness, beauty, positivity, appreciation, and diving love.

The roots of this name devive from the Greek and Christian culture. Grace represents "the blessing of the Lord" and "divine love". It also symbolizes kindness. Grace is also the prayer Christians tell before their meals. As you can notice, this name has an interesting background. It's a representation of logic and understanding.

What does it mean to be named Grace?

If you're named Grace, you're probably intelligent, graceful, elegant, and intuitive, highly-intuitive and prefer solitude over overcrowded places. You don't like to spend too much time with other people, preferring to invest in spending time with family, instead of partying, and having a good time.

The male name of "Grace" means being philosophical, prophetic, introspective, and soul searching. However, they also are opinionated and critical. You may overthink which makes you stressed at times. Grace can be secretive and solitary, but also be a born leader that struggles to deal with ignorant individuals. This can cause stress and anxiety.

Others describe you as loving, loyal, and kind. However, you can be hard to understand at times because you don't want to talk about your feelings.

There is a long list of famous individuals with the name Grace including: