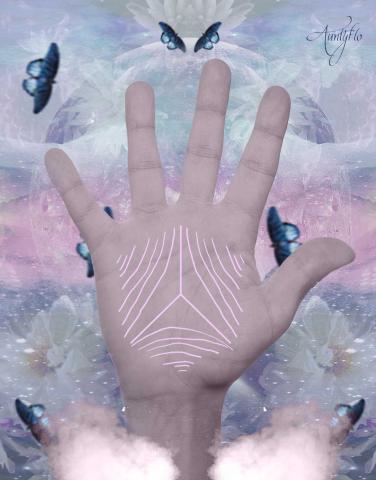 The word "triradius" was introduced in the study of fingerprints in the 20th century. By 1980’s the word had been used exhaustively.

The Federal Bureau of Investigations (commonly known as the FBI) stopped the usage of that word in their book ‘The Science of Fingerprints’ published in 1985. There were several reasons which lead to the decision to discontinue the word by the FBI. The FBI adopted a new word called ‘bifurcations’. This is currently the correct word used in the science of palmar dermatoglyphics. Many experts have made attempts to give the correct definition of the word ‘triradius’.

The best scientific definition of triradius is given by Schaumann and Alter. In their book Dermatoglyphics in Medical Disorders they say that a triradius is created by the meeting of a tri system of ridges. The triradius has a geometric centre which is called a triradial point. In real sense, the triradius is the meeting point of the three ridges mentioned above. The ridges then form angles with each other. The angles between the ridges are 120 degrees.

The next definition worth mentioning here is that of Cummins and Midlo. His definition of triradius is given in their ‘Fingerprints and Soles’ which was published in 1943. They believe that the triradius is a point which can be located at the meeting point of the three ridge systems which are opposing each other. In the case of a normal loop or whorl, a meeting takes place which pulls together the three zones.

There must be a meeting of three independent ridge fields. The point where they meet is known as the triradial point. There are also three radiants which will make angles that measure up to 120 but not less than 90 degrees.

The great thinker Lionel Penrose is said to have invented the word dermatoglyphics which is frequently used alongside triradius. Lionel says that the triradius can be likened to an island or a junction on a ridge and if you take a close look, you will discover that it looks like an enclosure.

The terms used in the field of palmistry have been changing so much that various authors have caused confusion. A good example is the use of the phrase ‘type lines’. The F.B.I uses the phrase in a different manner as compared to the way it was used by researchers. The word delta was introduced by Sir Francis Galton in a way to denote the shape found on fingerprints. The F.B.I later changed the meaning of that word to mean a point in their literature. In the study of the fingerprints, a triradius is an extremely useful pattern. The people who have this pattern are known to bear fire in them. At the same time, these people can also be very turbulent in life. It is very important to note that there are two main types that are the same.

There is also triangular patterns that appear on people’s palms as listed below:

There are cases where the triradii happens on the base of every finger. In this case, the subject is unable to cope with problems. Therefore, they do not enjoy their lives to the full. These people are constantly trying to understand the darker side of life. They are interested in murder, crime and the occult.

What is the Location of the Triradius?

It is located at the very centre of the human palm. This is what is normally called the axial triradius. When you have this on your palm, then you should be aware that you might suffer from heart disease which is genetic. This problem can be avoided if you start following a lifestyle which has limited amount of stress.

Every single finger on our hands is endowed with a palmar triradius. There are many variations on the numbers of triradii on people’s hands. The determinant on such number is the presence of loops and whorls. There is a simple equation that palmists have used to discover the number of palmar triradius on one's hands. If we give letter (D) to mean the number of fingers and palmar triradii the letter (T) and palma loops as (L), then, palma triradii can be found by using the expression: T = L + D – 1

The Dermatoglyphic Features In The Palms

In humans, the palm has been divided into seven parts, which are essential in dermatological analysis. A triradius is a central point in which ridges do radiate in tri-directions. On the human palm, we have four tri-radii located in the distal portion. These have been simply named a, b, c, and d, they proceed in the radioulnar direction. “t”, which is the axial radius. The axial radius is mainly found next to the palmar axis which is referred to as the axial triradii.

It is found close to the proximal margin of the human palm and is what separates the eminences of hypothenar and thenar. The triradius is most commonly denoted “t” and most of the time it will be much less that 10% of the entire distance between the distal creases of one’s wrist ad the middle finger’s proximal crease. In some normal cases, the triradial point will be displaced some of the conditions that displace the triradii are congenital defect of the heart, mongolism, broad thumb syndrome, turners’ syndrome, and downs syndrome.

There is little dermatoglyphic knowledge in relation to bronchial asthma. In recent times, the knowledge of dermatology in relation to genetics is a field that has attracted various scientists. In the case of asthma and atopy, the genetic factors are highly influential. In fact, close links have been found between their chromosomal sites. Phenotypes for asthma have been found to be polygenetic which has called for expression of multiple genes.

For people to have asthma the goniometric value pertaining to their ‘tda’ angle is studied. In their right hand, there exists a noticeable ‘tda’ angle. Dermatoglyphics in patients who have an allergic disorder has been a popular study by scholars and experts who have discovered a relationship between a higher average frequency of radial loops as well as arches on finger tips and asthma. The dermatoglyphics for bronchial asthma is indicated by the presence of whorls in both thumbs. Around 56% of the asthma patients have whorls in the thumbs, with 63% of the ‘atd’ angle ranging between 41 and 46 degrees.

Dermatoglyphics in congenital asthma indicates that patients have relatively higher star whorls, as well as egg shaped ones. There is a higher frequency of the whorls in the first finger of asthmatics, however, in overall the asthmatics have a low frequency of arches. The main limitation of using the ‘atd’ angle as a dermatoglyphic parameter is, it tends to get lesser as one grows older.