Simian line meaning - What does Simian Line mean if seen on your hand? 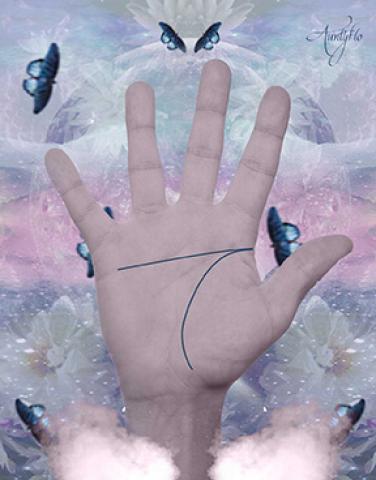 The Single Palmar Crease or Simian Line is the name given to the joining of the heart line and head line.

The quadrangle area between the Head Line and Heart Line is lost in such a hand. This line signifies that the bearers emotions and mental powers are blended together. Normally, such a person will take things to extreme, they are intensive. Alternative names for this line are the simian crease, transverse palmar crease and simian fold.

Research in 1963 by Davies and Smallpiece concluded that there was a high proportion of Simian Lines in newborn babies that suffered neo-natal death or still birth. As far back as 1866 Langdon-down concluded that this line is normally seen in children of the mentally retarded.

There is much evidence that scientifically there is relationship between diseases and palmar creases. In 1971 Chaube arrived at the conclusion that patients with schizophrenic disorders generally have a simian line. They took Palmar prints of 127 patients and 536 normal people to try to understand the differences between those suffering from schizophrenic problems. The summary of the work was a relationship existed between the Simian Line and their schizophrenic patients. Another test was later carried out by Bali (1983) which came to the same conclusions. n recent times this line has been documented as a 'minor physical anomaly' (= MPA*) at birth. This means that it is a minor birth mark at birth.

Many palmists always focus the Simian line with the negative influences. Although rare, this lines normally appears on people that have a tendency to have problems communicating with other people. The ancient palmists predicted that these people will always have emotional problems. They move from one emotion to another. There is also a strong feeling of enjoying conflict. They are jealous of other people but they seem to be able to detach themselves when in an argument.

On a positive note, people with this line are normally brilliant in many areas of their life. They focus on work and can be quite loving, caring and happy. The only downfall is that sometimes they focus on one activity too much and find little time for anything else. If the bearer is religious they may become a fanatic. If the bearer is an accountant he may be a workaholic. If the person is a housewife they may clean all the time... in other words this person gives everything to his or her desires! They have the greatest will of all. If the line appears on only one hand then this means the person may have traits of the characteristics outlined before.

There is a challenge on trying to relax, they generally tend to work hard at their careers, having a strong desire for accomplishment. Subject's of this line stand out from the crowd. They are normally found on people from religious backgrounds or specific political groups.