Palmistry And The Mount Of Saturn 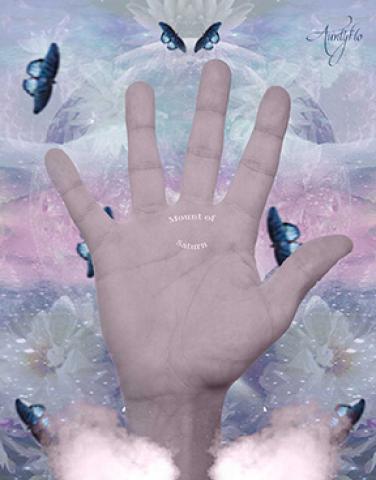 This means "time." The Saturnine person will always be concerned with time and the rules of life. This mount was considered negative 500 - 600 years ago in palmistry literature. Many markings on the mount were connected to death. However, in the modern world, with the help of improved medicine this is now rarely the case.

This mount is infrequently over developed. The more prominent the mount, the larger and squarer the Saturn finger. Saturn qualities are associated with a focus on rules, career, reliability of others, reasoning, and obtaining information. Care must be taken when reading this mount as there is an association with many strong characteristics. Mount Saturn is known as the “deity of good luck”. This simply means that if the mount of Saturn is well developed and structured, then the subject will have good luck in most of their undertakings.   If the subject has an over developed mount then the person will struggle in life to try to keep others on track. They have a habit of pulling away from commitment. They must take time to liberate and decide on what will be the best way forward.

This person brings about balance of other personalities. On a negative note, this person's personality is normally depressive. Their personality is sometimes eccentric, most of the time, they will come across as aggressive. As they age, their character worsens till they resort to the spiritual world, believing that it's their ideal source of peace and security. Those with a prevalent Saturn mount are described as Saturnine. A personal with too much of a Saturn's impact will be too traditional, distrustful, firm, and reluctant to respect others. Too big a mount of Saturn indicates that these individual's are introverted, and aloof, too introspective and cautious.

They may even become ungenerous and doubtful or incapable to believe in anyone.   If the subject is a man his appearance is most likely to be a tall person. Typically, thin and pale. The person with a mid-sized mount of Saturn is one who displays an excellent feeling of togetherness in his or her family. The Saturnian's point of view is of wisdom.  He or she normally aims for a career in authority, such as a manager in an organization. If the subject has a depressed mount of Saturn they will not have the negative qualities of this mount. Instead will have a feeling of liability and organization.

They may come across as being flighty, reckless, unorganized, and trivial.

The shape and size of the mount is an indication of the varying degrees of these virtues in the subject. If the Saturn mount is large and slightly raised, then the subject will have an assurance of meeting their life long ambitions. These achievements will be met without the individual having to go through stress or hassle. If this mount is not developed fully, then the individual shall have a lot of trouble in their life as they will always struggle to meet their ambitions and goals. In such a case, the person will be prone to causing self-destruction. If a person has a loose mount of skin on the Saturn mount this is an indication of self-destruction.

Their lifestyle will always lead them astray, leaving them with disappointment.  As the mount Saturn is found at the base of the Saturn finger, it symbolizes the supernatural forces in a person’s life, this simply means, if one has a well grown Saturn mount, they have extraordinary abilities in occult or magic work. These individuals are lovers of money and have put all their hopes in getting more wealth as the only way their lives can improve.   They will pay huge amounts of money to get whatever they want. Their best known weakness is being suspicious of all other people, the habit normally starts when young, here they show great suspicion of their friends and family. The subject is likely to cause self-destruction in their lives. The mount is common for the people who engage in unlawful activities, this is inclusive of thieves. For such individuals, you will find the mount light yellow, at times it can be white. In comparison to the rest of the population, these individuals are light skinned and their hands are relatively pale.

The marks that are generally considered positive such as the triangles and squares improve the desirable qualities of the mount of Saturn. There are also markings that bring about undesirable qualities and they have been named the negative markings, they include grilles, crosses, and islands. 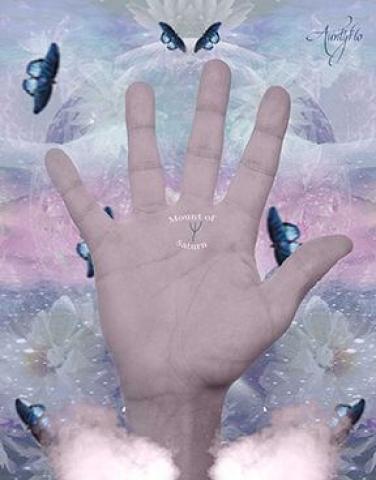 A trident on the mount of Saturn

This is certainly a great sign. If this sign is clearly formed then it means that success will come to the subject, even though his or her personality may try to object to it. It is quite normal for the trident to be found on the mount of Saturn. 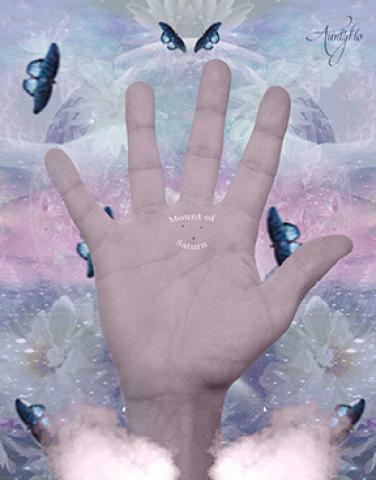 Bindu on the Mount of Saturn

This sign is a small dot on the hand. It represents someone that will have the characteristics of this mount to the extreme. The more bindus that appear the more concentrated the personalities of the person, thus, this person will be strong and opinionated. 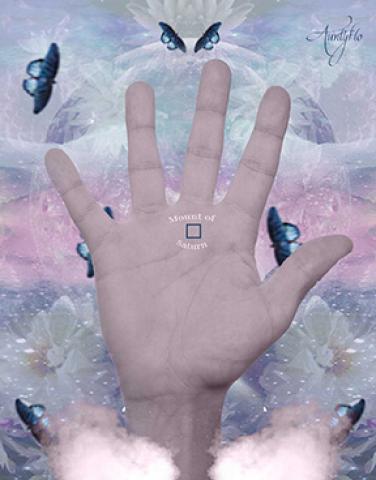 If the mount has a square, then the individual will be have protection against tragedy and harm. They will be protected from adversity. Such an individual may suffer, but for very little periods of time. 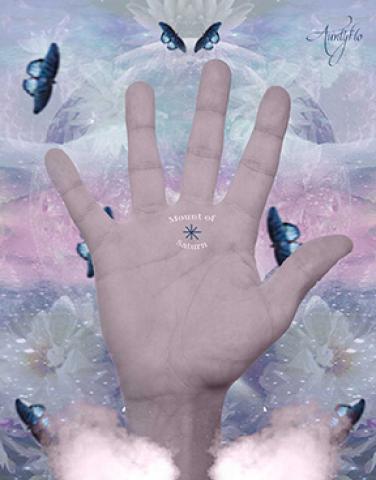 Ancient palm reading books denote that having a star on the mount of Saturn is indicative of some fatality in the lives of individuals. This is common in the hands of orphans, widows, and widowers. There will be extra trouble if there is a branch of the heart line that is crossing the line of destiny, this will mean an interruption to the subject's lifecycle, which will cause interruption or temporal blockage of achieving ones ambitions. A star will also show the loss of the subject’s beloved ones such as parents or spouse. In the past, a star was the prediction of an incurable disease; this was confirmed if it was also found in the Venus girdle, it could as well depict that one was to get paralyzed, but this could be reversed by the presence of two stars. This is a common feature in the hands of dangerous criminals facing execution or equal penalty. Please do not be alarmed when reading this because the predictions were given before modern medicine and different laws! 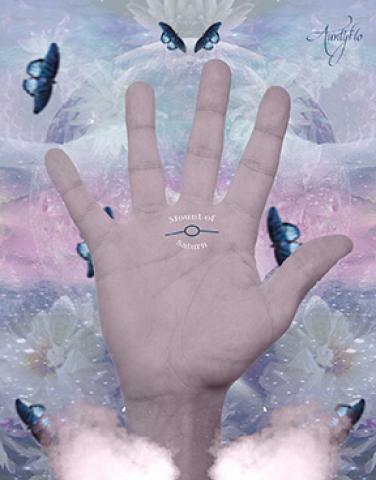 For an island to be located on this mount  mean's that the individual will encounter a lot of suffering because they are impoverished. On the other hand, it will be indicative of impotence, reproductive problems, or genital dysfunction. Island's always represented misfortune on the mounts. 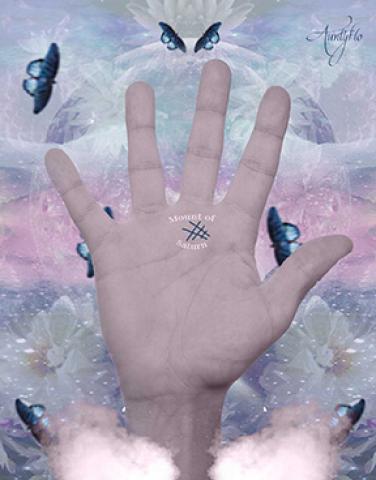 If the individual has a grille/net on the mount of Saturn, then they may have exposure to terrible events. They will be quite stingy. Due to a high level of bad luck, they will lead a life full of unhappiness, they will feel engaged. In the past, having a grille was closely related to imprisonment. 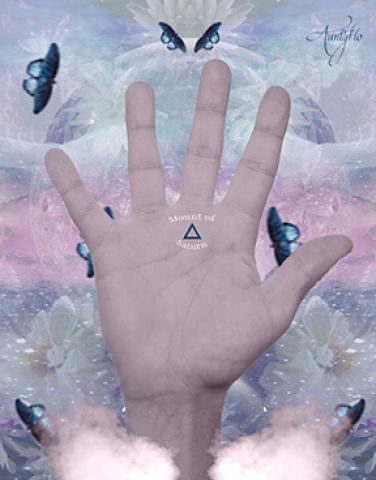 People with a triangle on their Saturn mount will have a high passion for the occult as well as metaphysics. The triangle implies that one is a very good scholar, who can spend long periods of time studying books or research. They pay attention to details and have a high level of intelligence. 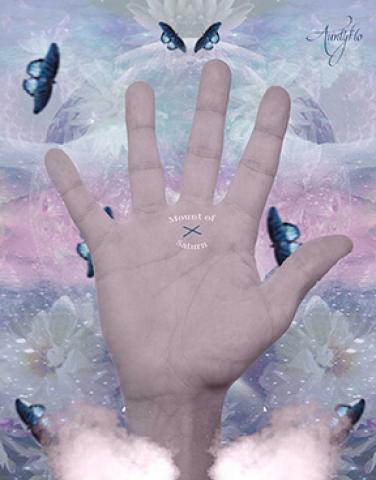 Cross on the Saturn mount

In the past, it was considered that an individual with a cross on their Saturn mount was most likely to meet their death on a scaffold; this will remain true if the subject engages in unlawful activities attracting the death penalty such as being a murderer, or an assassin. Otherwise, the individual is likely to die from serious accident or some other shocking and tragic events. These predictions are from palm reading books that are old, before modern medicine. However, in every palm reading book the cross is indicative of a high degree of grief and general sadness. People who have a cross on the mount of Saturn will be exposed to recurrent misfortune. They will not have a clue to the cause of the tragedies and hardships in their lives. The rareness of good luck in such individuals will leave the subject feeling hopeless and miserable. They will often seek answers to mysteries in their lives. An inclination to transgression is quite common for these individuals. They don’t mind breaking the law and will always be ready to face the consequences. Individuals with these fears are exposed to evil doings and will never have happiness in their lives no matter what. To ease their suffering and misery, they will resort to the alternative and illegal ways of getting money. Other subjects will be fearful of facing the law and as a result, will resort to this person conning others to get money from other people. 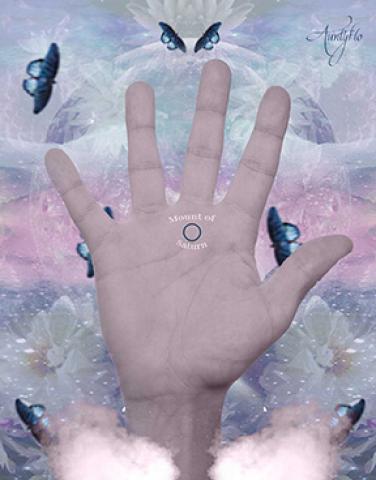 Circle on the Saturn mount

To have a circle on the mount of Saturn is a positive omen. This is always a sign of amity and goodwill. The circle is usually associated with the signs of a completion of projects, success or lasting good to the subject. To the young, this is a symbol of a wedding. 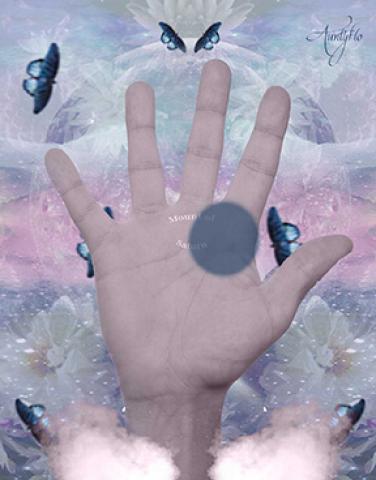 If the mount of Saturn heads towards the direction of the Jupiter mount this reveals integrity and high self-respect. This person will be ambitious, good and strong. Many women have the responsibility of a career as well as children and for this mount to veer in the Jupiter direction means that they will have the willpower and energy to handle this. The thoughts of these subjects appear time-bound and worldly. 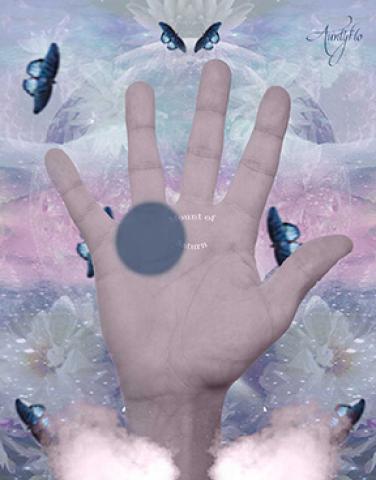 An inclination of Saturn mount towards the Apollo mount

If the mount is inclined towards the ring finger (Apollo mount) then the meaning will mean this person change. This results in someone that is dubious. In most cases, the individual will be highly esteemed in the community in which they live. If this is inclined towards the Apollo mount, the person is not competent in the community; they will be reliant on other people for success. They will get disappointed on regular basis, this will make them failures in both of their career, business, as well family. 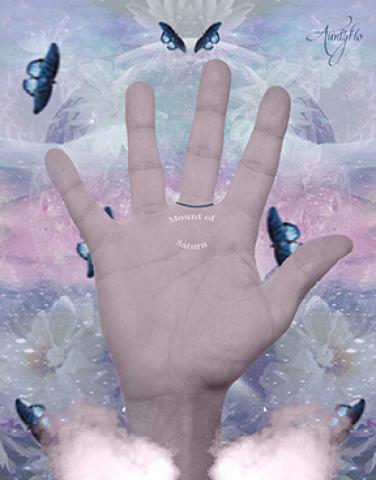 A Saturn ring on the mount

In ancient palm books, the worst misfortune that can meet the person who has a full Saturn ring on the mount. The person with such markings will as well suffer from a deadly disease; this will be confirmed by the presence of another cross on the line of mercury. The comparison with the features on the mercury line has to be done before one makes a prediction of any events to happen in times to come. This person enjoys being alone they like their own company. People with a Saturn ring are generally quite lucky in life. This important symbol means that this person lives life as a hermit, seldom connected to other people. If the ring of Saturn is strong, deep and clear then this is a positive omen. If the Saturn ring is incomplete with broken lines this means that the subject may be exposed to unforeseen dangers, such as fire or electrical shocks.

To avoid possible calamities it is important for this person to try to think before carrying out tasks. Many years ago, palmistry books associated the ring of Saturn with death and widowhood. Recently text into the meaning of such a ring concludes that it is often found on the hands of people from lower social economic classes. For this ring to have branches means the person will be connected to an inner spiritual guide, someone who can help them in life.