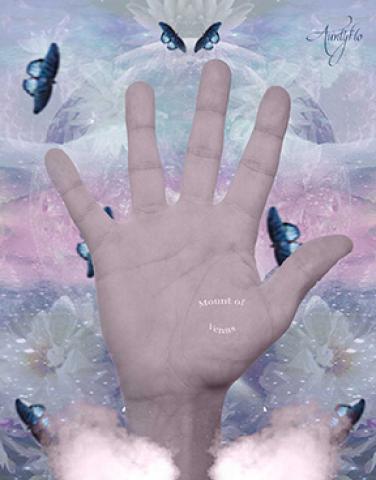 The mount of Venus is named after the goddess of love.

This mount is a representation of the family, desire, romance and love in ones life. It is found at the base of your thumb. This region reveals the love life of the subject. This mount is normally around a third of the subject's palm. A positive mount is soft to touch, and slightly pink. A strong love affair normally increases the size and "pinkness" of this pad. A puffy mount of Venus is a clear sign of being unfaithful in love relationships. The bearer of such a mount have a great fear of commitment.

There is a single exception which arises when the thumb and the head line have much stability. When this is the case, then the tendency towards passion will be used as a middle ground in handling sexual relationships. A normal sized mount generally suggests that the subject has inner warmth. If the Venus mount is pink in colour then it indicates that the subject will be resistant to illnesses. If the hand is quite rough or hard then the bearer can be somewhat aggressive in love.

The presence of many lines on the mount means that the subject has intuition and occult abilities. The areas covered by the mount of Venus clearly points out that this is the major drive in your life. When your spouse is materialistic, then your love life becomes very difficult. You will always find yourself working too hard to maintain a good life. In such a case, you will have less time to take a look at those things which matter in love. This way you will be less romantic hence you can be boring.

People who do not have deep head lines and poorly configured thumbs with an exaggerated mount of Venus means that this person is considered to be fulfilled with their love life. When the mount of Venus is predominant, then the subject is physical and may also have huge eyes and lips while the rest of the features are quite small. They people are naturally taller than average. The majority of these people are capable of taking a wide outlook at life. Of all people the Venusians are known to be very romantic and very out going. Therefore, I will be right to say that these people know how to live with passion.

At there homes you will find plenty of exotic devices which when combined with great works of art make life very comfortable. People with a large mount of Venus have a better understanding of human psychology.

This is the main reason why they are good at teaching, politics and psychology. People with a highly developed mount of Venus have a taste for luxury and beauty.  To reach the hearts of such people you need to buy them very expensive gifts. This is because for them truth and beauty are the same thing. Love at first sight is a major occurrence in their life. They usually fall in love in a hard way and most of the time they do that blindly.

Things to look for in the Venus Mount

A muscular mount of Venus looks healthy and it is a bit raised. There is a variety of advantages and disadvantages associated with the mount of Venus as illustrated below. The mounts of Venus which is extremely developed are sex addicts. They are always demanding attention from people of the opposite sex.

A mount of Venus which is of ordinary dimensions shows that the subject has a great passion for Music and also loves fine food. If someone has a lower mount of Venus, then such a person is easily lost in thoughts of action that leads to sexual arousal and subsequently they become more imaginative. If there is no elation at all on the mount of Venus, then the subject is faced with a case of infertility. Such people are inclined to be very strict in life. People who never change their decisions have both Mount of Jupiter and Venus having a substantial elevation. This is the group of people who are capable of keeping a relationship to last a lifetime with good morals. People who have unfavourable positions of the mount of Venus may easily get addicted to drugs. In this group, people may be suffering from various ailments of the reproductive system.

In cases where the mount of Venus is poorly developed, then the subject is said to be a smooth operator in life matters.  The mount of Venus will be smooth in texture.  They calculate their decisions before executing them fully.  It has been reported that couples who have small mounts of Venus have the ability to stay together for the long term. If you do not posses similar properties then there is a likelihood of being separated later on in life.

The mount of Venus is an indicator of the following: 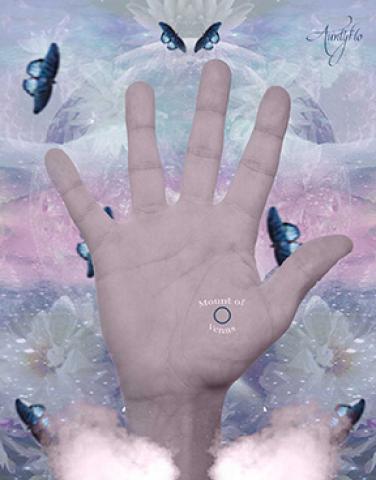 A circle on the Venus mount

The presence of a circle on one’s Venus mount is an indication that they will get cooperation in arts as well as success in romantic relationships. This is dependent on whether the other parts of the palm have favorable conditions; otherwise it will be an indication of a long term illness. 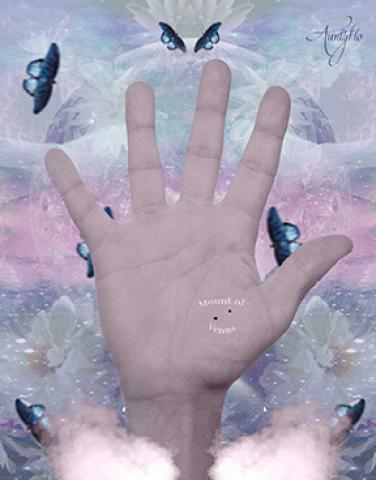 This spot is at times referred to as a mole. It is a black spot that appears on the Venus mount, if this appears then one will get a bad reputation, and likewise, they may never get loved in any sexual relationships that they will engage in. This spot can be caused by diseases in a persons reproductive organs. 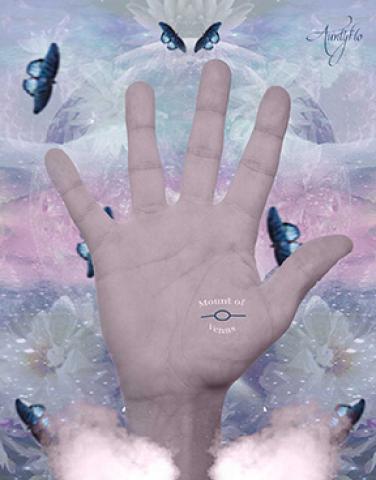 Island on the Venus Mount

If the island sign appears on the Venus mount then the subject will have a feeling of temptation and will always be hearing the voices of doubt when they enter into sexual relationships. 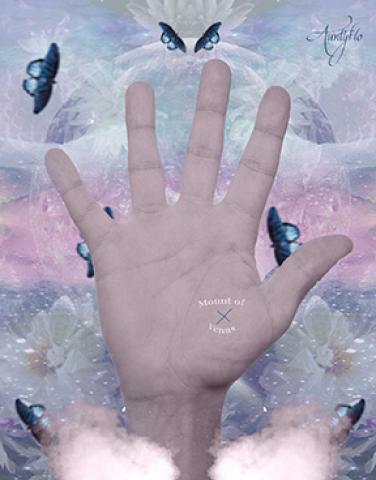 When there is a cross on the Venus mount, the subject has a great ability to offer other people love.  The individual’s is an idealist that will pay a large portion of their attention to sex and relationships. This will make them imperfect when it comes to marriage. 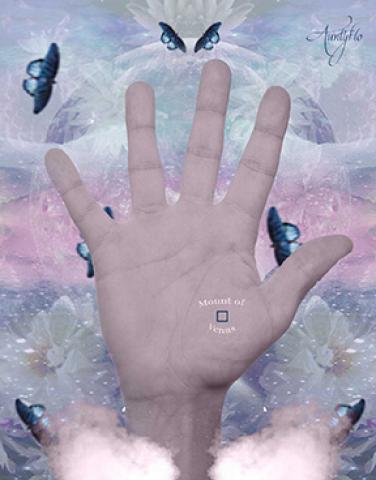 Square on the Venus Mount

Having a square on the Venus mount offers the subject exclusive advantages, the main one being the shielding from the bad effects that result from passion and lust. On the other side, if the square has shifted towards Manibandh away from the Venus mount, the person will be quite unlucky as they will spend their entire life in solitude. 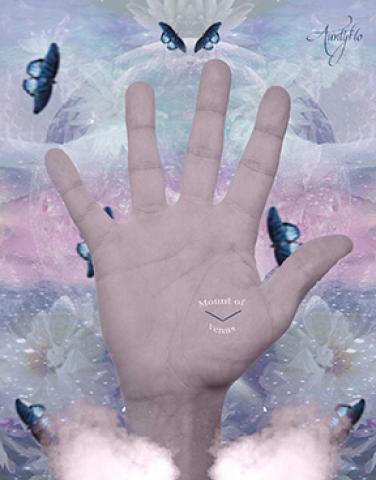 Angle on the Venus Mount

The symbol, when appearing on the Venus mount will mean that the person will spend extravagantly on enjoyment and other types of luxuries. 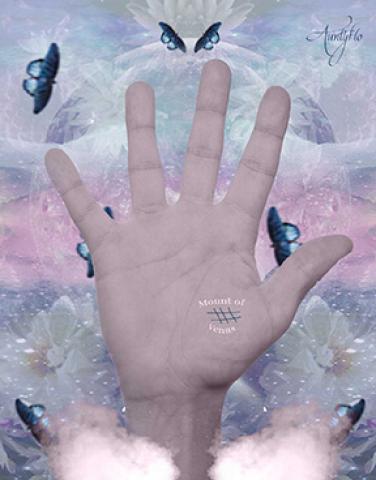 Mesh (Net) on the mount of Venus

If one will be having a net like sign on their Venus mount, then they will be lacking some unique qualities. The person will be filled with feelings of passion and lust all through their lifetime. If the person will not have other favorable signs, they will have serious trouble in sexual relations as they will be searching for it without caring if they are getting it on moral grounds or not. 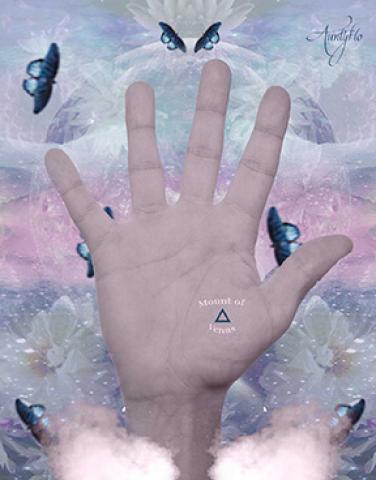 Triangle on the Venus Mount

Having a triangle on the Venus mount is indicative of the person’s passion and excellence in mathematics, they will be highly imaginative when it comes to matters of relationships and will always start relationships based on the merits and demerits they predict. The triangle will prevent the person from stray minds and ideas and will nail down their minds as well. This people are always out of trouble as they make important considerations before taking any step in their lives.

Star on the Venus Mount

Having a star on the Venus mount is indicative that the person will be well liked in all the matters pertaining to love, sexual relations and marriage. They may in later life experience large losses and wastage on cash. 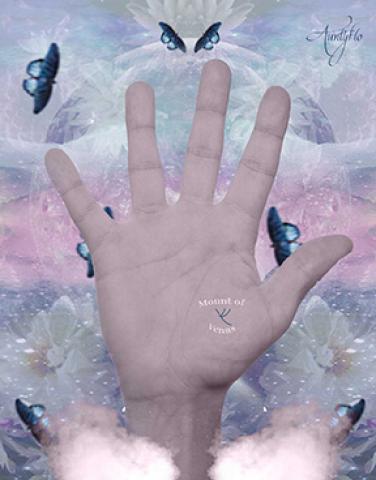 Trident on the Venus Mount

This symbol on the area surrounding the Venus means the person will have increased emotions in matters of love, beauty, and success.

Signs on the Mount of Venus