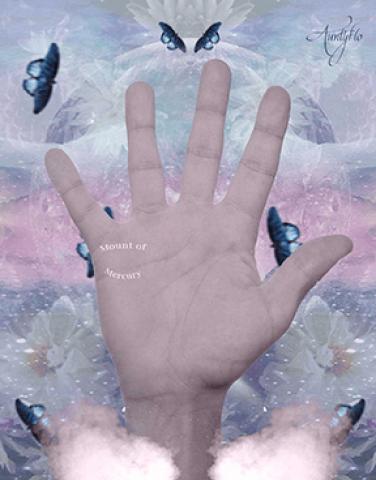 At the bottom of the little finger lies the Mount of Mercury.

All people in life are eager to gain wealth and live a comfortable lifestyle, thus this mount is important when studying the possibility of wealth in the subject.This mount can uncover the subject's chances of acquiring wealth and getting rich. The associations of mercury are commerce, business, shrewd in money matters and great with the written word. Mercury can also indicate a period of separation. This could be through divorce, a family rift or even the inability to form intimate relationships.

The god of Mercury was the god of criminals and unethical business practices, therefore, this person may be associated with such practices. People who are being influenced by mercury are generally lucky; they will be successful in many of the activities they undertake. People with a well developed mount of mercury are deemed clever, this means they will adapt well to a good number of situations. They have high level of discipline which accounts for excellence in everything they do. In addition, they have good planning skills which makes them more productive than those without a prominent mount. They have an high level of determination, making sure they produce the best of whatever they can, despite numerous obstacles in their way. Those people that have a strong mount will be a great translator and have an interest in scientific studies, especially astrology.

Every aspect of the mount of mercury is of importance for the palmist when making predictions on the person's life. The mount should be slightly developed, if it overdeveloped too much or too little, there could be some confusion in the subject's life. For instance, a highly protruding mount of mercury indicates high level craftiness to the extent of cheating other people, and possibly fraud.

If the mercury mount is prominent, the individual will excel in psychology and related disciplines. The have a talent in approaching other people and moulding their minds. They have major advantages in the business field and will make vast amounts of wealth. A person’s opportunism is at times the determinant for a person’s wealth. They are in constant lookout for opportunities to exploit others and make them rich. On getting the opportunity, they will maximize gains by moulding the minds of other people into accepting their opinions. This person will be versatile and inclined to marry and have children at an early age. They are restless and want the security of a long term relationship. This person is fond of nature and likes children.

These people can be quite materialistic, to the extent all they think of is trying to become rich and climbing the social ladder. They are quite choosing in academic disciplines, many major in mathematics, science, and philosophy. The characters for such people make them good orators, actors and pleaders. Their hobbies are travelling and sport. Generally, these people, despite being very materialistic, will become successful in life. The flexibility of the fingers should be observed, for this shows this person's freedom of will. If the fingers are stiff then this means they are abnormally shrewd people, they are amazing in business, capable and able to develop many products - employing hundreds of people.

There are several other factors that need consideration as one undertakes analysing this mount. A largely protruding mount of mercury implies the individual is very materialistic. They have ambitions of saving any cent that crosses their palm as part of their efforts of getting rich. If the mount leans towards the mount of Apollo, then the person is at a clear advantage of getting wealthy without that much input or effort. The hands are common among people who engage in literary arts as well as scientists. If the individual’s palm is fleshy and soft, and the mercury mount is harder then the subject has passed the poverty line. On the other by hand, if it is prominent, the subject has a keen interest in scientific works and inventions. In some cases, if the tip of the finger of mercury is sharp and the mount mercury is prominent, then the subject will be clever - to the extend of approaching a genius. If the tip is square in shape, then the person has a high level of reasoning power. Consequently, if the tip of the mount is flat, then the person comes across as being eloquent. If the mount is small, the individual has a sharp mind. There are several reported cases where a womanizer; will have long fingers and a large mercury mount.

If the subject's fingers are long and slightly lean back, then they will be successful in their careers, or in situations that involve cheating. If the mount of mercury leans to the outer side of the palm, the subject will excel in business.

The person that has a well established mount is known as the Mercurian, this person will normally have an olive complexion, curly black hair and a fantastic energy. The professions that this person chooses include researchers, doctors, or even the legal professional, and they are successful in business. The first aim, in this person's life path is to discover which area in life is the strongest. This person knows how to tell lies. On a positive note, the Mercurian really is one of the better and more productive characteristics. The palmist Benham describes the Mercurian as petite, trim and normally professional looking. He or she has many individual characteristics which are not found on others,

If the apex is located in the middle of the mount then this person is Mercurian. The best qualities are demonstrated if this person has this position apex. They are likely to be full of great ideas. They have a tendency to learn more than one language or have an interest in computers. When the apex is located more towards the left hand side of the hand this means that they can suffer from selfishness. For the apex to veer towards the Mount of Apollo means that the Mercurian will become dedicated to art. They will enjoy musical hobbies and like to be involved with amateur dramatics. As previously outlined this person will be slim, small frame, trim in places, uncluttered persona with a solid, dynamic air about them. His or her mood changes quickly, depending on the situation.

The eyebrows are normally large. The hair is generally dark brown or even black. ; The particular Mercurian grows the facial hair easily, which usually covers the face, and usually just a little deeper compared to other people. The actual eye-brows are not solid but rather bushy. This person normally grows hair easily, normally having either a beard or long hair if on a women. The eyebrows sometimes meet in the middle. The eyes are normally dark brown or dark green.

Normally those people that have a strong mercury mount are charmers. The fingertips are generally pointed.

The Mercurian is generally effective, simply because of their shrewdness. If the subject is a male he is a wonderful liar! he can silently assess human nature and use this to his full potential. He will almost certainly choose careers involving law and health. Mercurians are generally fine writers along with great organization skills.

In regard to health the Mercurian is normally rather anxious and worrisome. They tend to think about things unnecessarily. His or her explosiveness and energy converse with their anxious system. They normally get stressed at work. Another hidden trait is when not working is that they are rather lazy. 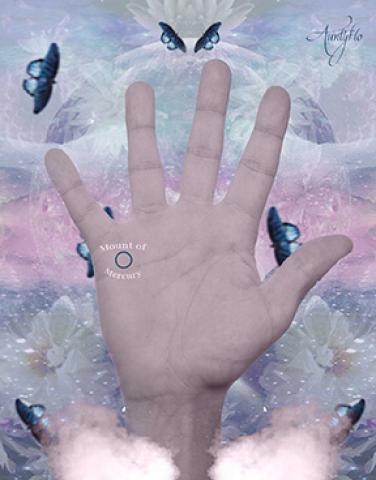 Circle on the mount of Mercury

To have a circle on the mount of mercury is a positive sign. This is always an indication of great luck and good will. The circle is usually associated with the signs of a completion of work. 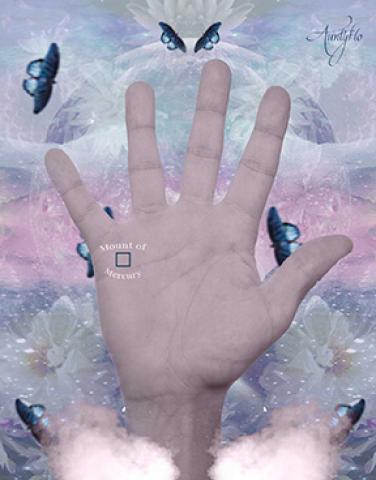 Square on the mount of Mercury

There are cases in which the mount has a square mark. In this case, there are high chances that the individual is considered a criminal, in ancient palmistry literature. They have tendency of breaking the law and will and engaging in many activities of antisocial nature. The mount should be clear of any markings. This includes a triangle, star, island, crosses, or stars. The mount needs to be slightly pink in colour. 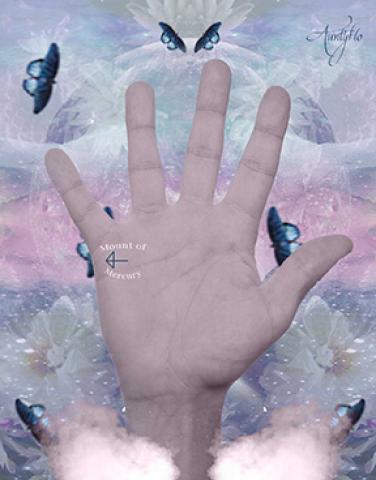 Fish on the mount of Mercury

A fish sign on the mount of mercury is a great sign for luck. It means that the subject will be lucky in life. This sign is popular among people who are famous. When someone has a fish on their mercury mount then this person will be charitable. He or she can be often be frightened of commitment. On a negative note they maybe constantly affected with sinus problems. If the fish (Machli) is not completely formed then this can still mean success for the bearer. 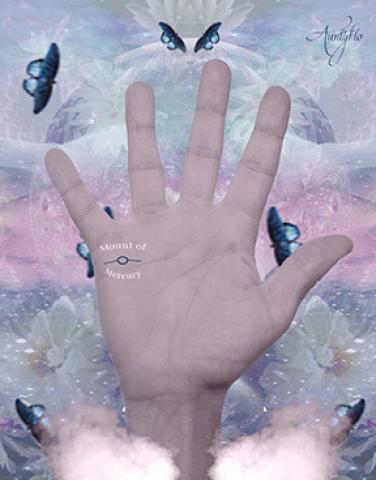 Island on the mount of mercury

To find an island on the mount of mercury means that there may be some money worries in life. The island is generally connected to adversity. 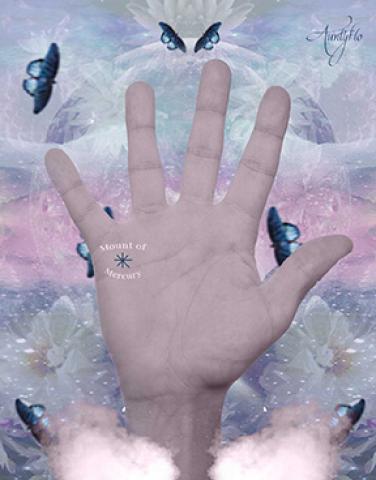 Star on the mount of Mercury

To have a star on the mount of mercury means that you are likely to follow a scientific career. This sign can also mean that the subject will enjoy success in life. 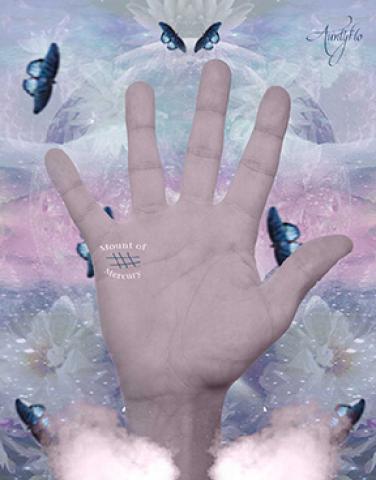 A net on the mount of Mercury

A net found on the mount of mercury is a positive sign. This net is straight and the line ascends across as well as below. This promises fortune, especially in making journeys. If ;dissected and uneven this may mean other people will be envious. If the net continues to the mount of Apollo this means that there maybe some minor adversities, especially in relation to the family. 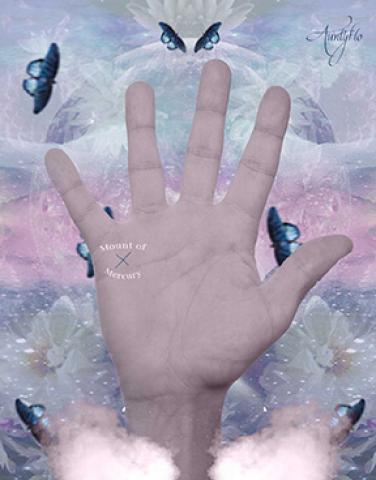 A cross on the mount of mercury

The cross is generally an adverse sign found on the hand. For this to be positioned on the mercury mount means that people are going to request help from the subject. This help will ultimately improve the subjects position in life. The cross towards the outer part of the hand is actually a positive omen.