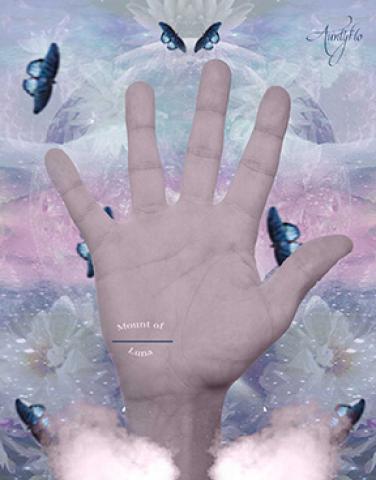 The Via Lasciva is a straight line that runs across the palm, starting normally on the Luna mount.

This line is rare, at times the line can be curved. In ancient palmistry the Via Lasciva line is known to mean that someone will be willing to overindulge in things in life, such as food or drugs. These people are normally focused on money and obtaining material wealth. This person always looks forward to things that will give them excitement. They often have an addictive personalities.

This is a strange mark which takes the form also somewhat of a semi-circle, but in this case it connects the Mount of the Moon with that of Venus, or it may simply run off the hand from the lower part of the Mount of Luna into the wrist.

The first-mentioned formation indicates unbridled sensuality and passion, and where it cuts through the Line of Life it indicates death, but one usually brought about in connection with the licentiousness that it denotes.

This Line running from the Mount of the Moon into the wrist denotes the most sensual dreams, desires, and imaginings, but, unlike the other class, it is usually only dangerous to the person on whose hand it is found. In both cases there is generally a tendency towards the taking of drugs such as opium, morphine, especially when the hand is noted to be soft, full, and flabby.

With a firm hard palm the subject usually indulges in excessive drinking fits, and when under drink seems to have no control whatever. If the Line of Head is found weak-looking, full of islands and descending downwards on the Mount of Lunar, insanity or the worst form of degeneracy will sooner or later destroy the whole character and career.

The line should not get confused with the travel line. The travel line starts at the side of the palm while it normally starts on the mount of Lunar.