What does the jupiter mount mean in palmistry? 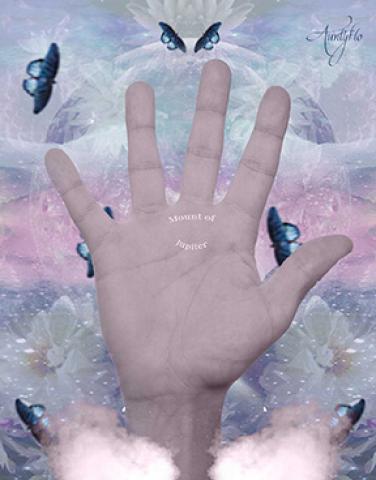 The index finger is known as the Jupiter finger. The area immediately below these fingers are known as the mounts.

If you stretch the hand and point to the side, there will be normally three raised areas below each finger. The area directly below the first finger is known as the Jupiter mount or alternatively the install of Jupiter, this mount has also been known as the Vrihaspati Parvat.

This mount was named after the Roman god, Zeus. The mount of Jupiter symbolizes the way in which the person exposes themselves to the rest of the world and the way a person gets recognition from society. It reveals feelings of self-esteem, as well as the air of power and management, idealism, feeling of respect and bravery. Some palmists view the general shape of the Jupiter finger rather than read the actual install. Going back to the 1920's a well-defined Jupiter mount indicated a powerful, strong person. William Benham wrote a book on palmistry which provides an intensive overview of the mounts and there supposed characteristics.

To have a raised Jupiter mount means that this person has positive outlooks, as well as charm. He or she is outgoing, has expertise in handling others, and aspirations. A normal and healthy Jupiter mount in a healthy hand is normally slightly raised. The bearer has a desire to help others.

However, if this install is far greater than the others, it indicates a feeling of trying to control others, as well as excessive pleasure and self-contentedness and perhaps, even bigotry. Be cautious of avarice, a need for power and one world.  People with Jupiter qualities are healthy they have the remarkable potential to hold talks. Simultaneously, they have a passion for studying and collecting information. They are heartened and great benefactors. Often these people head towards achievement. They have unique functions of power and freedom.

The Jupiter mount’s shape and composition

There can be various marks on the mount of Jupiter and these include squares, upward branches, circles, griddles, islands and triangles. In ancient times palmists read the hands of wealthy people, such as lords, ladies, judges and people with a good standing. Therefore, the information collated on the meaning of mounts is focused on people who were well-nourished. Many palmists are discontinuing the use of reading the mounts on the above. Cherio devotes a whole section to mounts and their meaning. As people are eating more healthy we find many people lack a raised mount. Some of the information below has been collated from many sources, namely, books on palmistry written in the 1920's.

Please support us by liking us on Facebook. Thank you so much in advance. 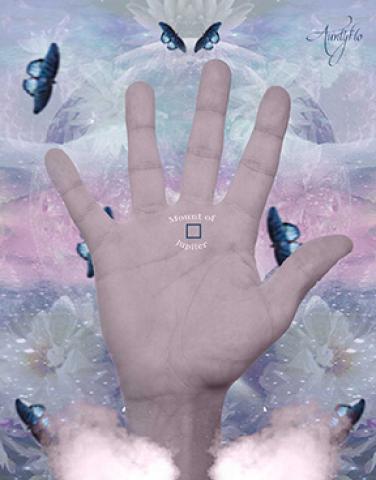 A square on mount Jupiter

A square on the mount of Jupiter represents adequate protection against negative traits. The subject will be highly respectable in his or her career. They have the unique qualities of organizing and managing people. Most of these people will end up as successful leaders. The marking is popular on teachers. If the mount has a square in the middle, the subject will have a large amount of common sense. They have high intelligence levels and are discreet as well as highly subtle in their outlook. Generally speaking, these people have good skills in diplomatic and management skills. They will hold the good qualities that are associated with the mount of Jupiter, which are happiness, power, leadership and the ability to control other people. 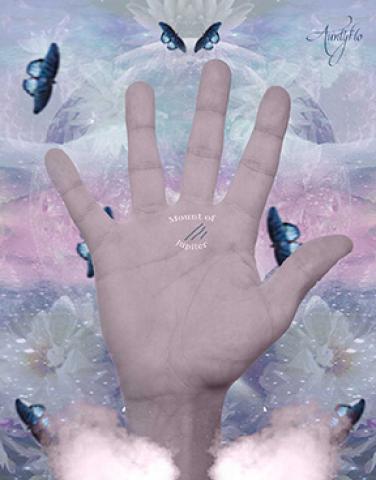 Other lines on mount Jupiter

Other lines that appear on the mount are known as sibling lines. The subject will have a high level of parental ties. There are some instances that the sister lines will be cutting across the upward branch that will normally rise out of the Head Line, or even the Life Line, in this case, the subject will have problems with their earthly success. This will indicate that one of the subject’s parents will negatively intervene in their objectives and aspirations. 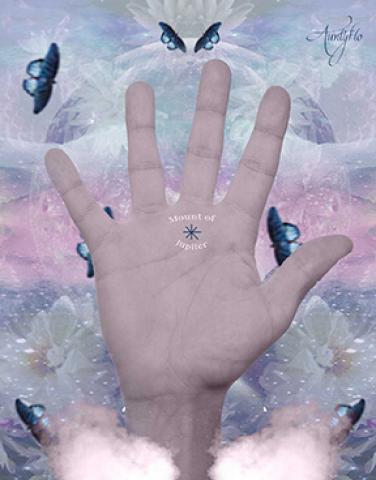 A star on mount Jupiter

Having a star on the mount is a sign of success. There are cases where the star is indicative of renowned ties with celebrities in a career field. Some of the desirable qualities of the star include happiness, ambition, dignity, diplomacy, determination, good marriage, and higher education. A perfect star indicates good leadership and management capabilities. The subject will benefit from the rewards and fulfillment in life.

Grille on the mount of Jupiter

Having a grille on the mount of Jupiter indicates ill fated augury, this results from having some undesirable qualities. The bearer will be unkind, materialistic, and jealous. These people will be suffering from avarice and conceit. 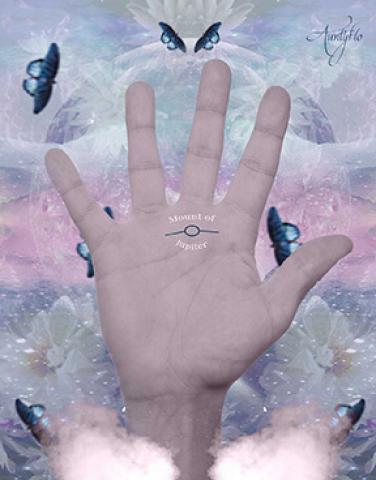 Islands show periods of embarrassment and poor comfort. They show that one does not have beliefs or religious values. For this to appear on the mount of Jupiter means that the bearer may find problems in a work situation, it can also mean problems with family members. 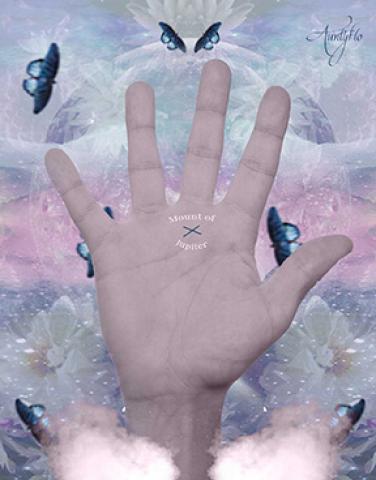 Cross on the mount of Jupiter

Having a cross on the mount of Jupiter is an indication of a successful union and a happy marriage. However, there have been claims that the cross will result in conflicts and other undesirable traits. The bearers risk being unsuccessful and lack happiness because of their grouchy / moody nature. These people are normally selfish, egoistical, arrogant, and self centered. They may be dictatorial, greedy, annoying, and idealistic. The size of this mount can be used to give prediction of the degree of harm of influence. 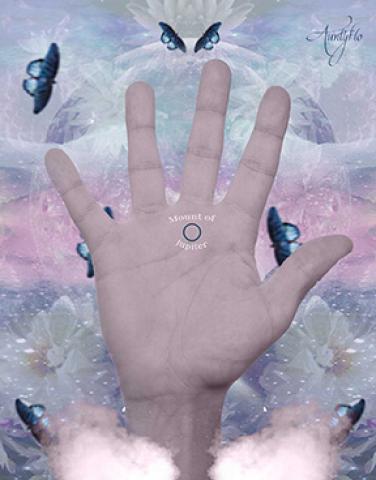 Circle on the mount of Jupiter

A circle on the mount of Jupiter is quite a rare mark. This means that the qualities of the Jupiter mount will be challenged in life. If the circle appears in the centre of the mount these people may get lost in the details in life. They become focused on small things. To have a circle which has broken lines belongs to a person that does not conform to the norm. Others may say this person likes their own company. 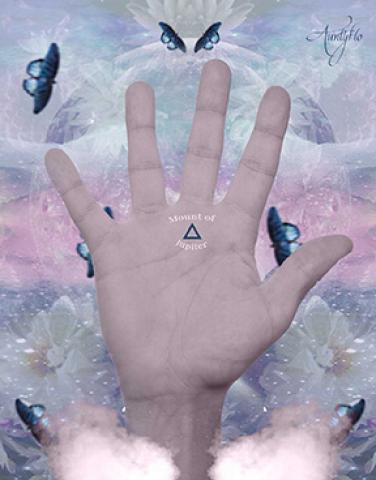 Triangle on the Jupiter mount

Some palmists believe that a triangle is a positive sign, especially on the mount of Jupiter. These people normally have great luck in leadership positions. If the triangle is slightly broken (lines are not joined up) then they belong to a contemplative person. The triangle will show us that this person will have great luck in the career. This person can work well with others and can push themselves in the right direction in life. 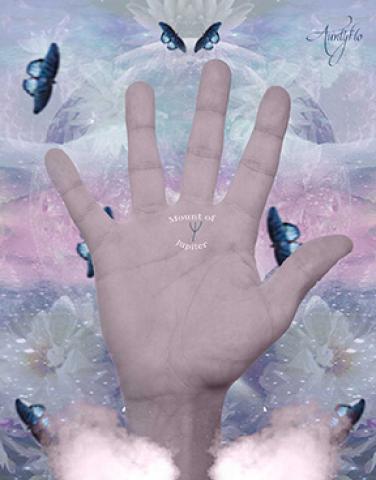 The trident on the mount of Jupiter

The bearer of the trident on the mount will be a clever person. The dangers of such a person is being a hermit or a recluse. The trident is such a positive sign that it is better than seeing a star on the mount. In essence this mark shows that the subject will be a success in the career, even famous. For the trident to appear from the heart line onto the mount of Jupiter shows that this person will have more success than anyone in their family. They will also enjoy doing something they love in life. 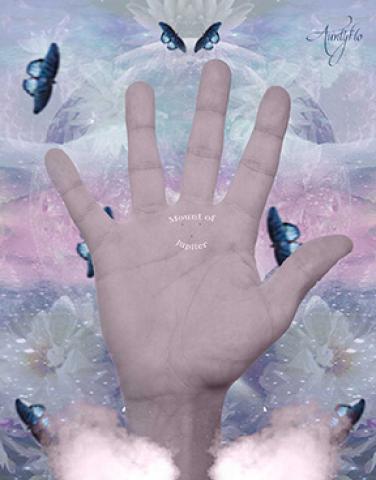 Spots on the mount of Jupiter

Spots represent problems in life. These are minor problems an when found on the Jupiter mount it means some health problems that will effect the bearers career. Cambell in his book, the encyclopaedia of palmistry defines the difference between spots and dots. He believes the dots are associated with depression. The spots are just discolorations. Cheiro thought that spots indicated an illness, if on the mount perhaps a mental illness effecting leadership qualities. Many people fail to have spots on this mount, and this is considered a minor mark. If the spots are absent then it does not effect the reading. To have a mole at this point (which rare) means that the dark side of the character can sometimes stop the bearer from succeeding in his or her career. 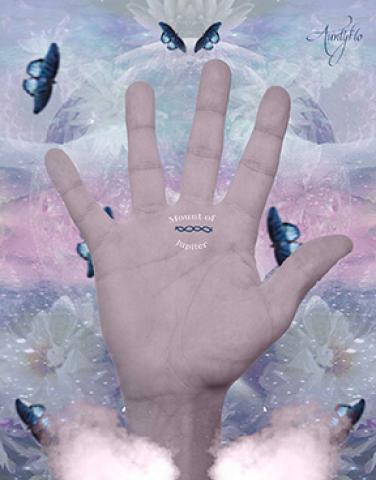 Chains on the mount of Jupiter

Chains are more or less a line made of small circles. To have a line of small circles on the mount of Jupiter means that you may lack a purpose or direction in life. The most common chains are on actual lines but to find these on the Jupiter mount means that this person lacks a diplomatic abilities. Unfavourable chains crossing the mount into the Jupiter finger means that the fortune of the bearer will be coming from someone else, normally a partner. 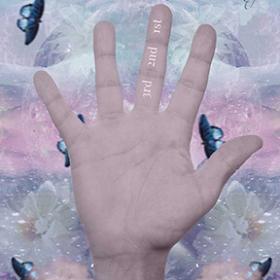 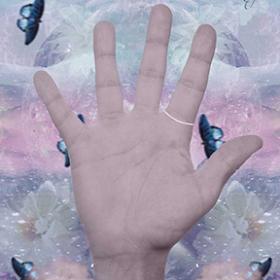 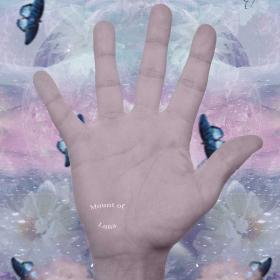 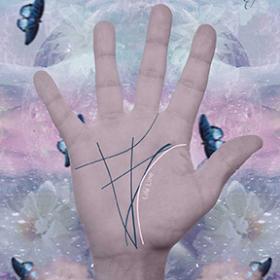