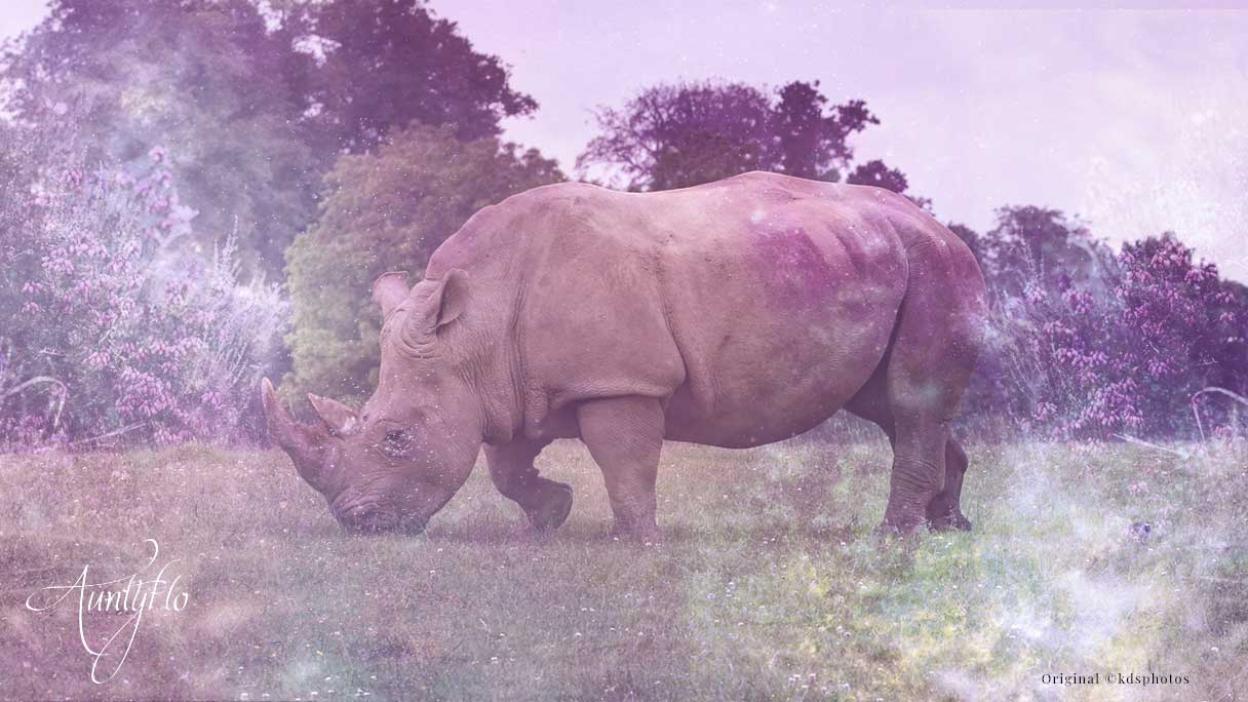 Rhinoceros or commonly called rhino can mean many things from a magical perspective. In the the animal kingdom, a rhino is one of the top three largest and primitive-looking mammals which originally came from Asia and Africa.

When a Rhino come into our lives, what does it mean it to us? The representation of rhinoceros in animal symbolism often leads to misperception. In defining the symbolism of rhino in our life, learn to look beyond its displayed traits and characters. The guiding principle for depicting its meaning is that “things are actually not what they seem.” Yes, these large creatures are known to be aggressive and maybe feared for but in contrary, they portray passive nature. Look at them closely. They are observed in its preference to solitude, as they bound themselves to graze off vast grasslands solitarily. Seeing or noticing a rhino should lead you to harbor thought of appreciating the environment.

The rhino is one of the biggest animals in the world. Spiritually speaking, the rhino is associated with peace, solitude, gentleness, power, and steadiness. There are five main species in the world of rhinoceroses. Three species originate from Asia and two are African natives. As you might know, the rhino is an immense mammal - which are easily recognizable for their horns. The white, Sumatrian and black rhinos have two horns, while the Indian and Javan species have just one single horn. The horn from a spiritual perspective is interesting - they all use their horns for different purposes, including foraging in the mud for sustenance and self-defense. Although all five species are similar, they have their differences. I am going to go through this as I think it is important for you to understand which rhino appeared in either your dream or before you.

Think about the rhinoceros savoring the smell of tall grasses in vast grasslands, giving them the vibrancy of survival. The Rhino also exhibits solar animal symbolism, seeing one in the wild means that you will feel a sense of warmth to your mind and body.

When you are feeling insecure, empty, or nervous – think of the rhino, invite its intimate connection to stability, stamina, and promising power. This will surely give you the assurance of gaining a high level of adaptability, confidence, and strength. The physical strength of third largest mammoth is indisputable. Rhinos have horns, what is the significance of their horns? It has its invaluable meaning… In a history of the Ancient Shamans, they recognized the rhino horn as special and unique.

What does the rhino horn mean spiritually?

As discussed earlier, the rhino symbolism has fallen into a misguided perception of others. Take for example the misperception of physically taking the rhino’s horn hoping that its energy will be translated and be brought along with the horn being put in the altar or a rhino’s horn being turned into powder. These are things people kill rhinos for. This majestic perception of mankind towards the mystical rhino horn is not actually as they seem it is. The rhino horn rather has the energy to make you feel, think, live and love on a deeper level. Believing in the power of the golden horn sends us the message to become true, beautiful, loving and joyous. Living with all the positive energy that we can draw from our belief. Touching a rhino horn can unveil visions that we didn’t recognize or saw previously. You may start to adapt looking at things deeply, broadly and differently. This can affect your judgment and decisions in life which will eventualead led you to achieve goals.

Rhino as a totem

As I have mentioned before and I will say it again – rhinos are one of the largest mammals on the planet. Therefore, they definitely mean a strong physical presence both spiritually and materially. One can assume that animals these big thus, they are associated with power, authority, and dominance, they’re actually not. In fact, they’re seen as passive, gentle beasts.

And just like any other creature on earth, they flip from passive to aggressive when they feel that danger is around. I have also mentioned that most of the rhino species are endangered, meaning there’s not many of them left out there in the wild. And believe it or not, they act more protective around people than we do around them. Meaning, they’re strongly connected to humans, especially the ones fighting to protect them. The rhino as a totem symbolizes fake hopes but also illusions. Things might not be what they seem. Rhinos are there to remind you that things aren’t always as they seem and you won’t always be able to get what you want in life. If you find yourself deeply connected to the rhino, this spiritual guide will teach you how to be realistic and keep fighting for what you want.

They also represent inner peace, solitude, agility, freedom, and unconventionality. The symbolic meaning of rhino is associated with earth. Because of their large size and weight, rhinos press firmly into the ground, representing the deep connection they have with earth. The rhino is there to remind you to say tuned with the planet too.

What does it mean to see a rhino in a dream?

To dream of rhino means you’re reminded to stay tuned with the planet and stop searching for the meaning of your existence. Just live and be grateful for every breath you take. The rhino in your dream represents your deep desire for solitude because the animal itself prefers to be alone. This animal visited your dream to awaken you to the illusions you believe in and remind you of your inner strength.

Rhino as a symbol in different cultures: Rhinos have different symbolism in different cultures. For example, the Swazi culture believes that rhinos and other animals hold human attributes in order to make them more personal to the listener. This gives you the ability to identify traits in the rhino that you carry yourself. This makes the identification a lot easier and more successful.

Rhinos over the years have been subjects of many art pieces. For example, they’re fairly represented in Chinese culture through art pieces since they were once abundant in Asia. There is even a bronze wine vessel discovered in Shandong back in 1843. It’s the oldest and undeniably beautiful art piece ever discovered because of the unique patterns and swirls representing the rich bronze color. The beautiful vessel is just one example of people using the rhinos form to create their masterpieces during history.

Rhinoceros shows up as a spirit guide when

Call on Rhinoceros as a spirit guide when