Puer is represented by a dot formation is single, single, double single.

This placement represents the figure of a sword. Its name means the boy in Latin, and similarities to its form have also been noted as forming the “male” symbol. Coincidentally, this is also the traditional sign of Mars, which has the same planetary symbol.

Ancient Arab traditions sometimes associated Puer with “the beardless one”, which had connotations of a young priest. For this reason, many geomancy readers consider this figure to be linked with spiritual enlightenment or that of the initiate who is just starting on their journey towards a psychic awakening. Additionally, because of the connection with male youth, the figure is also considered a representation of the sword and indicates a “fighter”.

Keep in mind that geomancy has been a long standing tradition, used as a divination tool since ancient times. The energy and influence of Puer has a singularly biased basis, attributing the qualities of the element as being only male. Modern readers have adapted the meaning to fit into cultural understanding and in many cases will refer to the energy not as masculine, but as assertive or aggressive. 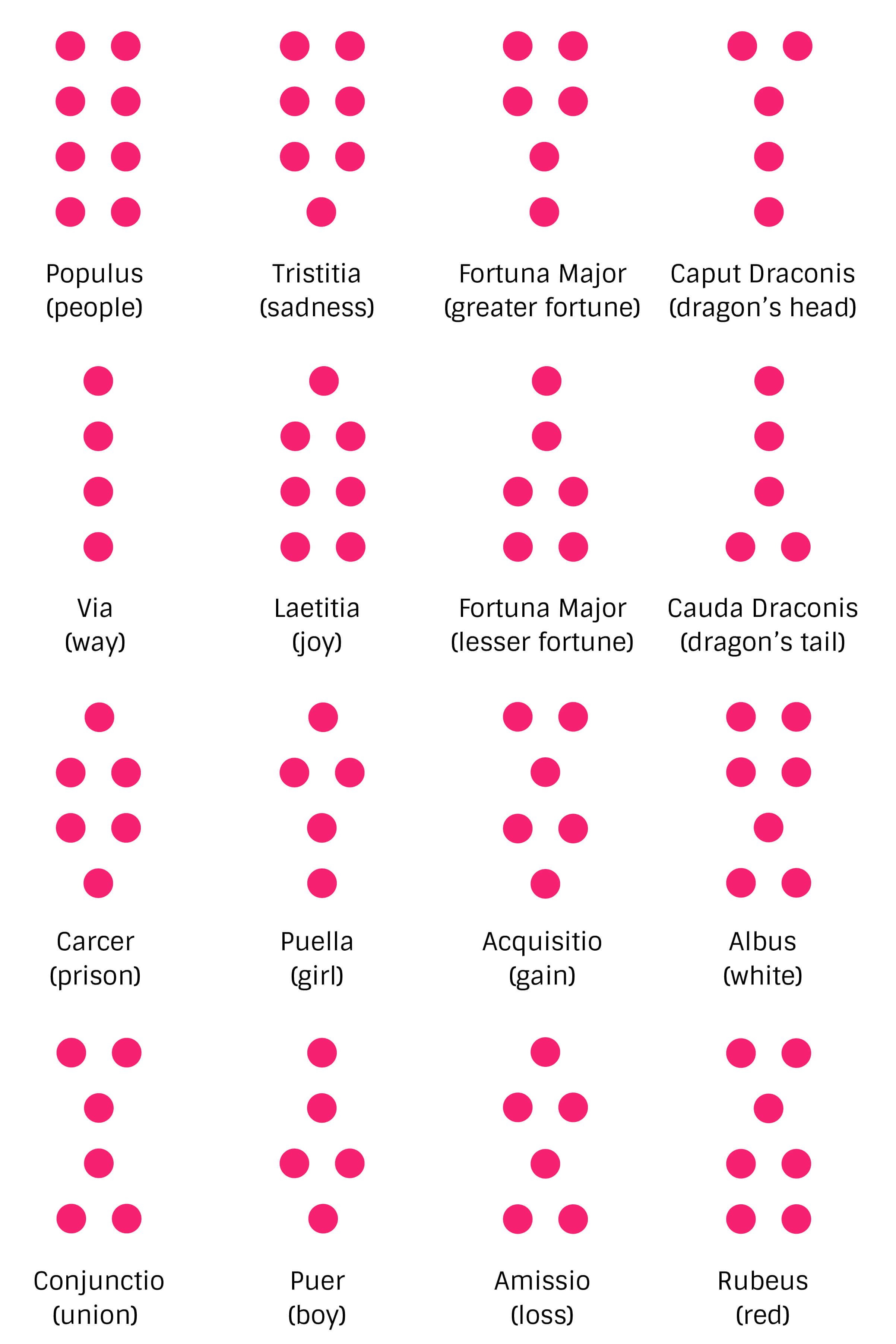 Afterall, Puer does represent fire and is also closely linked to the sign of Aries but carries its strength not in the active amounts of fire influence, but through the element of air. This represents a quick progress, expediency and a sometimes fickle stimulus around a person or situation.

Considering that the element of air is linked to communication, thought and intelligence, seeing Puer in a reading will often reflect a need mental stimulation or to quite literally, to stop and think.

Much like it’s tarot correspondence, which is the Ace of swords, another divination representation made from a sword that is usually pointing upwards, this geomantic figure is often said to represent strength and singularity, as well as the power of oneself.

You may notice that this figure appears to be more dynamic than other figures in the geomantic toolbox. Not only does it have alternate meanings, while other figures simply stand alone in their meaning, the influence from Puer is multi-faceted. This indicates that it is deeply connected with the transition of coming to age. For men, this can mean becoming more independent and finding their way as they become a man.

For women, it is similar to the transition of the maiden into the mother. This is a natural time in every person’s life, but one that is often wrought with worry, self doubt or simply being overwhelmed. Puer is a reminder to the querant that while life may feel out of control, this is not the case. Change and progression forward is an opportunity. Chances are when this symbol shows itself, there are prospects on the horizon. Now is a time to ready oneself, positioning for the future.

Seeing Puer in your reading usually indicates that you need to take some time for yourself and reacquaint with the soul. Steel yourself with yourself. Be your own savior and focus on personal constitution. This time to think is imperative so that the appropriate decisions are made when one is called into action.