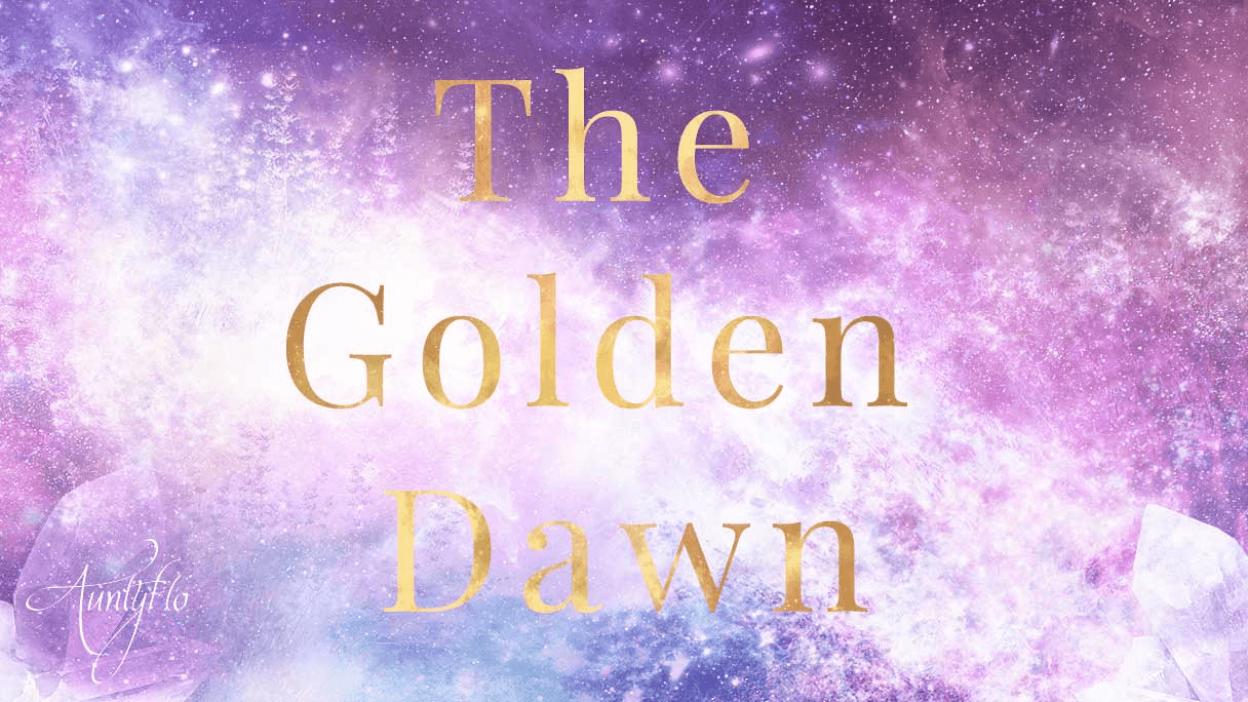 What we’re about to talk about is a highly controversial topic and a lot of misdirection goes into the topic of ‘The Golden Dawn’.

This is because the rules of The Golden Dawn are kind of like Fight club. You don’t talk about the Golden Dawn. Some have published the work and writings of the tradition, while others have built their career around concepts originating in higher magick that are eerily similar to the Golden Dawn Tradition. However, the teachings and the inner workings of the Golden Dawn tradition are sacrosanct and clandestine and a true order member would not dare to speak of the workings to a non-member. With that being said, there is some information about the order that can be given without breaking any vows or stepping on any more toes than we have already.

In short, the Golden Dawn is a brilliant system of magical workings. Simply speaking, it combines pagan religions, various sympathetic and symbolic magical traditions including Jewish and Egyptian mysticism, with a little catholic flair.  It is layered to combine a Western Esoteric Tradition. We will leave the actual rituals and initiation information for others to talk about and stick with the facts about the order that can ethically be spoken of.

The Golden Dawn was created as an outlet for those that wanted to learn of a high-consciousness in the 1800s. This drive for higher consciousness reached out and sparked the mind of many, but maybe most importantly that of Samual Liddel Mathers. There were others that led to the creation of the Golden Dawn but he was considered the forefather. Mathers was introduced to scripts of the Golden Dawn by a Rosecrutian friend, William Westcott, who as the story goes, “found an old fractured manuscript” that had part of some very mystic rituals of something called the “Golden Dawn”. Unsure what to do with these works or what they meant he showed them to Mathers and asked him to elaborate on them Westcott had some working knowledge of magic and mysticism in his own right… as did many enlightened individuals of the day. But he asked the help of Mathers due to his personal connection and specifically because his beliefs were enough different that when Mathers incorporated the rituals that they would not be so contrived.

To this day Westcott’s intentions are suspect… just like him finding the manuscript, and so he is rarely credited with more than fueling the fire behind the order. There are current debates that the manuscripts were forged, thus the whole pretense of the Golden Dawn are based on a falsehood. That being said, whether or not the initial intention of the order was suspect, the practices, teachings, and rites of the order have been honed over 100 years and definite research and study went into the curriculum of the order after the initial potential offense. Westcott’s importance comes in that he supposable had a contact with the direct order of the Golden Dawn via notes that accompanied the old piece of paper that was found as well as his shared guidance of the early formative years of the Golden Dawn.

He and Mathers developed the order from scratch and deemed an outer order and an inner order. They relied heavily on the Tree of Life of Jewish mysticism and structured the grades according to the sephiroth of the tree. Each station on the tree has a different meaning and energy to it, and those magical workings were applied to the lessons learned as the initiate worked up through the ranks.

Early on Westcott, Mathers, and another friend, Dr. W. Woodman were at the upmost ranks within the order. They entitled themselves the Three Chiefs of the Second Order and took their direction from an alternate plane of existence. They built up their order like many of the time – through ranks and secrecy.

Secret orders were surprisingly popular in the 1800s and towards the end of the century there was a desire from many open-minded and elite society members for an outlet for spiritual growth. Mathers himself was able to attract many of his social strata peers because of who he knew on a day to day basis. He was already somewhat of an elitist of his time being fond of liberal movements such as feminism and the budding thoughts of eugenics. He was also a non-smoker and generally took care of himself. From the outside he was viewed as an intellectual and even spiritually gifted. He also had friends that were influential and intellectual… and more importantly… they had money.

During the last part of the 1800s the order began to take shape and more than 300 initiations were performed. As advancements in grades were made, the elite of the Golden Dawn expanded and the second order circle was formed and filled. As the advancements grew and there were more adepts within the order, a kind of power struggle developed. Those that graduated on started to view Mathers’ rituals with more scrutiny in that the requests of the students could be odd, difficult, and impossible at times. His moods would swing and financial and marital stressors drew Mathers into the spotlight of being eccentric at best. The intellectual flavor of the order took a new formation with the second circle taking on more members and bickering within the order caused a break from the original order and Mathers and his wife Mina to move and start a new lodge in Paris around 1890.

Mathers, by this time was considered to be off his rocker by many, but he still maintained devout followers to his teachings. In fact, it was his followers that kept the Golden Dawn afloat. Mathers and Mina had no money. Mathers would focus not on work, but philosophical pursuits and more importantly his writing of rituals. He still shared his information with the lodge in London and as time went on he continued to create great works. He completed student material while writing his own book, The Book of the Sacred Magic of Abra-Melin, in which he claimed to be possessed from the astral plane and the writing technically was not his own.

From his possession and his continuous contact with those on another plane including the Secret Chiefs, he then made claim that he was initiated into the Third Order. Historically, this was the turning point for the breaking up that would later happen to the Golden Dawn. This claim caused him to lose his main benefactor, Anne Horniman when she contested his advancement. His writing continued and even when he lost this main funding more students would come to him and the order continued. In fact, just a couple of years after his main funding was cut; a young Aleister Crowley walked onto the scene and was initiated into the order.

He was a quick study and shot through the ranks quickly and in 1896 traveled to Paris and managed to talk Mathers into his initiation into the Second Order. By this time Mathers had been, depending on who you ask, taken over by complete lunacy or enlightened by the Third Order to the point in which he frequently lost touch with physical reality. Back in London, claiming that Mathers’ didn’t have the right to initiate and denied his right into the Second Order. Rejected but still determined, Crowley went back to England and tried to quell the Second Order into submission. There was an attack upon the Second Order and Crowley lost and both Mathers and Crowley were expelled from the order.

The two men blamed each other and a “war” between the two ensued. The Golden Dawn was in turmoil and even though there was a gentile truce within a break was also looming. As Mathers and Crowley publicly fought against each other the order was brought into the fray with Crowley going as far as publishing some of the sacred texts of the Golden Dawn. It is contested if what he posted was true or even complete, but the damage was done. Famed author W. B. Yeats took over the Second Order and tried to keep the group together. Some members went their own way and other splinter groups were formed. Those that followed Mathers made their own order called Alpha et Omega Temple and other notable groups formed. It was around this time as well that the OTO (Ordo Templi Orientis) gained popularity as well with the aid of Aleister Crowley.

"Order of the Companions of the Rising Light in the Morning" was created as another offshoot and is important to note because the studies of this order were more based on mysticism and magik and branched away from the Rosicrucian and Masonic traditions. From this branch Israel Regardie published secret manuscripts and officially brought the secret orders to light with publication and supposable complete disclosure.

During this time, 1940, the face of magical and esoteric teachings began to change and the publishing of sacred text by Regardie is what truly brought the Golden Dawn to light amidst the new age pagans and made the order a household name within the magical community. There was information here and there before but even Crowley did not inflict the damage that Regardie did.

The Golden Dawn itself is still disputed with different temples and orders claiming the true right to the teachings with the Crowley and Mathers split still being debated today. There are still orders that, while secret, can be sought out for high-magick training and education. Currently the Hermetic Order of the Golden Dawn, is stated to be an “occult-oriented fraternal organization established by the Freemasons in England (1888), led by S. L. MacGregor Mathers (1854–1917)” however this is a splinter group from which Regardie came from. There are others such as the Temple of the Morning Star (Golden Dawn ala Mathers tradition) which claims to have roots dating to Mathers directly as well. Other, non-Golden Dawn groups such as the OTO (Ordo Templi Orientis), Rosicrucians, and the Masons all have footholds within the magical societies and remain strong.

Note from the Author:

The description of the Golden Dawn is a basic one at best. One could write a book (and actually, quite a few have!) on the subject of the Golden Dawn, the secret circles and cliques within the order itself, and the history of the order and characters involved. I have chosen to leave you with a conversational piece. In the future we will delve into more detailed aspects of the Order. For now, if you want to know more might I suggest you to read the following:

The Golden Dawn: Twilight of the Magicians – by R. A. Gilbert

Women of the Golden Dawn: Rebels and Priestesses – By Mary K. Greer

Gilbert, R. A. "Seeking That Which Was Lost: More Light On The Origins And Development Of The Golden Dawn." Yeats and the Nineties. 33-49. Basingstoke, England: Palgrave, 2001. MLA International Bibliography. Web. 31 Mar. 2012.