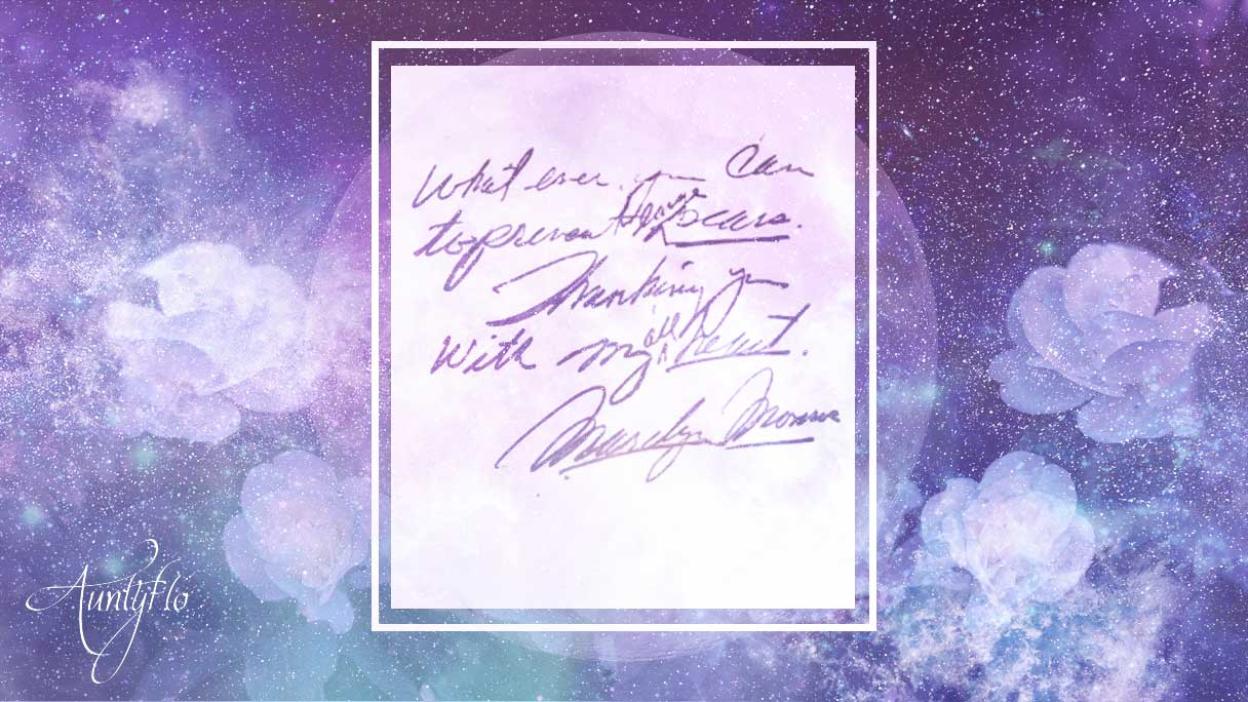 Marilyn Monroe’s handwriting analysis has been famously focused on for years and years.

Her beauty, both inside and out has been a classic part of American history, detailing a time when life was more innocent, when the world was simpler, easier. She represents a sparkling age where mankind sang, danced, worked hard and came home to their family at the end of a long day of work.

She was such an enigmatic and charismatic person, who entranced thousands just by giving them a simple glance. But she was also a troubled soul. Working so hard to make it in the industry, allowing herself to be vulnerable just as the candle in the wind that Elton John focused on.

Except her candle did go out too soon, and when one looks at her writing style, as well as her famous signature, you can see a little bit of that longing for a place to belong, for someone to love her.

Some might say that the way that the M’s in her name swoop out into a swirl, shows how creative she was, but that the lines of the rest of the characters in the name showed more of the sadness than anyone ever really knew or understood at the time.

When one takes on the exceptionally difficult task of graphology, or analyzing a person’s hand writing, it is important to recognize how the base line of the signature or word is affected by the rest of the phrase.

Meaning, when Marilyn wrote to her fans, the first and last letters were normally big and swooped beautifully, but the tightness with which the rest of the letters pushed together showed someone who was afraid of something, afraid, had mood swings, suffered between being super happy and then very sad.

In this, there is evidence of people pleasing, as though she could do nothing else but attempt to please others, and so the big eccentricities in her handwriting showed her very nature, that is, hoping that everyone would love her and treat her as a whole person.

Unfortunately it was all too often seen that Ms. Monroe was objectified by many, and some would say, based on the lonely strokes of the ‘roe’ in her name, where they were almost non-existent that they genuinely showed her as someone who was very lonely.

The base line of a word or phrase is a very difficult thing to read.  One must pay attention to the signature itself and see how straight or how focused a base line is.

Meaning, if the bottom of the word or phrase is pointed up to the right, or starts higher toward the left and swoops down, each of these things mean something else.

In Marilyn’s case, she curved upward almost like a bell curve, which showed both her fantasy approach to life, as well as her kind nature, while also being dedicated to serving others and making them happy.

The mystery about what really happened to Marilyn Monroe which ended her life will always be a mystery, but her handwriting showed her to be someone who was far more than she appeared to be on the outside.