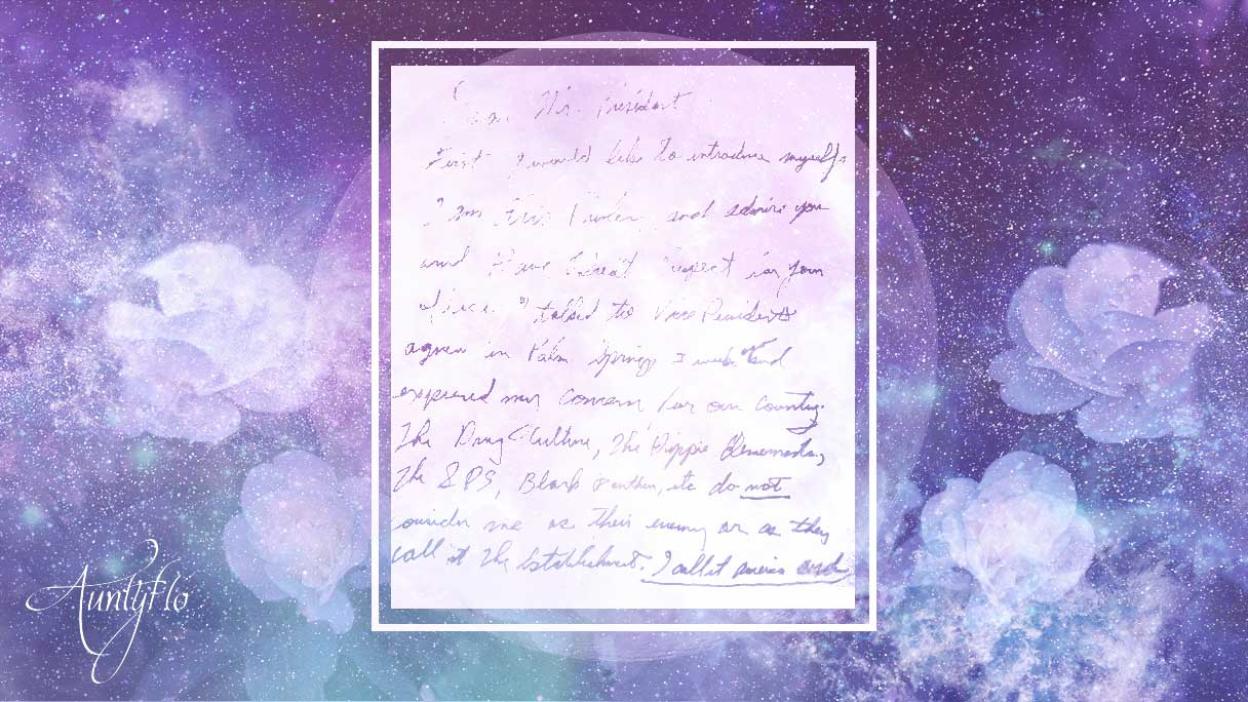 Elvis Presley is one of the most widely known and esteemed music performers in the world. He broke records for his music sales all over the world; he taught America how to gyrate their hips. He is also someone that is more missed than many others who have passed away. The heart of America is in the love for Elvis and so even though he has been dead dozens of years, his life, and his journey, who the man is and probably always will be continually examined by the masses.

In a particularly interesting and well known letter which was written to President Nixon in 1970 by Elvis we are able to analyze his handwriting to see what he was both feeling at the time as well as what kind of person he was. The actual letter itself was to describe to Nixon how frustrated he was with the way things were being run in the white house. The actual writing itself was a relatively simple and normal letter, but it was riddled with a sense of anger and turmoil as well as some anxiety which has fans scratching their head wondering what he must have been going through at that time of his life.

The letter itself was simple meeting request for the president, but it said so much more as graphologists became able to dissect Elvis’ real meaning and personality throughout the writing. He wanted to tell the president that he was worried about the problems in America with the youth and drugs and he wanted to be the representative who brought this concern to the surface. He requested to be a federal agent in the war on drugs. In the letter, each phrase and sentence was written in a different way, almost with no consistency whatsoever. It is almost as though he paid no attention to how the letters themselves were actually formed, which leads many to believe that perhaps he was under the influence of either drugs or alcohol, as some of his other writings are known to be more consistent.

However, others believe that he was simply so passionate about this particular area of concern in America that he was very passionately placing his letters to paper. A notable ‘I’ in the letter has about four different angles associated with it. The lower loops of the g’s are another example of the inconsistency and tumultuousness he must have been feeling when he was writing the letter as the g’s are themselves directed first toward the left and then toward the right. Some of the letters are big and some are small. The base line goes up and then goes down, almost as if he was writing on a ship which was out at sea!

When one has such ‘discordant’ handwriting this tends to focus on the emotional struggle going on within the writer. He was a strong advocate to living sober for much of his life despite where things ended up for him later in life. He claimed that his own usage was more for his own health and well-being than anything else, but this is why the writing appears to be so conflicted. In this analysis you can see that he was conflicted with his own drug use but felt that it was important for the President to be more active in the ‘War on Drugs.’