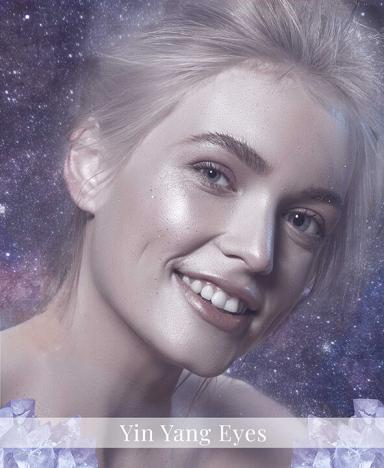 Yin Yang eyes are kinds of eyes that are off balance with one eye being noticeably larger or smaller than the other.

Often these eyes will be noticed because of the size but the shape of the eye will be the same and because of this the trait will make the person’s face interesting or just enough ‘off’ to still be attractive. Yin yang eyes are often pleasant eyes and overall attached to people who tend to be open and alluring to some extent.

On the outside these people can seem friendly or jovial but internally they are routinely just a little off-kilter. The emotions of a yin yang eye person can vary wildly which can enable them to be the life of the party while simultaneously having an internal panic attack.

Yin yang eye people are jovial in nature and like to be around people, however they also tend to be a bit over dramatic and have a flair for theatrics. Some would say that these kinds of people are emotionally unbalanced because one minute they can be laughing and joking and the next be sad or morose.

The good thing about this is when you cross these people it can take quite a bit for them to truly to be mad or to write you off. They will be irritable and easily upset but once they blow off some steam they will be back and perfectly fine with you. That being said, once you finally do cross the line with a yin yang eye person and they are done with you they can get quite temperamental, vicious, vindictive, or down right mean.

These people have a tendency to be passive-aggressive. They are not sneaky by nature but the emotional variance will not allow them to be direct or act with thought out plans. If anything they can be hasty or combative but when you truly need them they are quite reliable. Yin yang eyed people are not planners. You do not want them in charge of big projects or trust them to be the end decision maker on a task. They have a tendency to see the big picture in a whole new light. They do not just think a month down the line; they can pinpoint just about every possible scenario and try to plan for them all, which often is simply not practical.

Spur of the moment kinds of events are the yin yang eyed person’s forte. They are adventurous and often need to get away or decompress but they are almost always up for a bit of company on their lively adventure. Work relationships can be great so long as you have patience or are good at directing these kinds of people.

The key is to give them praise and to keep their work varied and challenging. If they are a boss then there is likely going to be someone else that is truly in charge behind the scenes.

Interactions with people can be difficult for yin yang eyed people because they have a hard time in seeing the root problems of life. Often they blow things out of proportion… which includes the view of themselves and they have a tendency to puff themselves up to appear more important than they are.

They do not do this in a mean or nasty way, they are simply seeking approval. They sometimes will lie or deceive for the sake of entertainment but will not understand when another is hurt because they have been misled.

For the yin yang eye person life is about the journey and if a white lie makes the adventure more entertaining, then ultimately they see no problem.