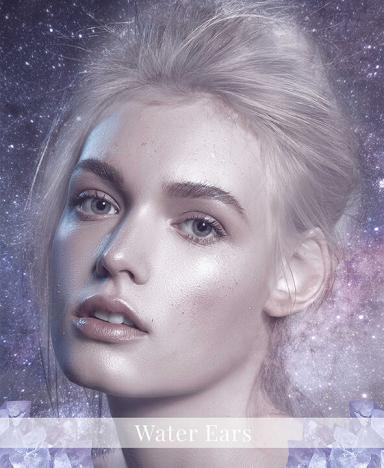 Water ears are rounder for the most part and tend to also be very highly placed on the head which causes them to appear as though they are reaching for the eyebrows in a very uplifting and happy kind of way.

The general look of the physical structure of the ear is that the earlobe tends to have a roundish appearance and sticks close to the side of the head as well. To be a water ear, your ear must be light and bendable, very flexible.

When a person has a water ear, this is very similar to the kind of personality that they have. They are able to be bent, molded, and they tend to go with the flow. They are very smart and tend to gather a lot of ancient wisdom with them on their path of learning throughout life. As a child their emotions were loved and respected and therefore as an adult they are able to not only feel things intensely but then be able to express that intensity to others without losing their emotional resolve.

This is a skill which many people lack in this world, because many of us are afraid of our emotions. This is not the case for the water eared person, they feel confident and comfortable knowing who they are and what they need and are not afraid to try to get their needs met.

There are those who are Water Ear people who do take their emotions to an extreme which can be somewhat unsavory, for example, if the emotions were not honed and honored or respected when the person was a child, then their emotions will be stunted in a way which will make it very difficult for the person to relate to others as well as to explain the way that they feel for fear they will be ridiculed or mistreated. However most have lived a relatively positive life as a child and tend to be fairly in control of their emotions.

Those with Water Ears tend to have careers in which they are helping others succeed in life, for them this is their strongest and most important cause to follow. They feel the sadness in the world and they want to do what they can to make it better. As a result of their approachability in life, they tend to take roles in their career in which they have a strong footing in political and matters of public security.

Their reputations tend to be flawless as they are always aware of themselves and of what they want to be doing in their life. They are highly respected and adored and most people just love being around them because they don’t have to worry about a lack of authenticity.

Those with water ears are dripping with authenticity; they make it their life’s goal to be as honest and clear as humanly possible. A water eared person will acquire much wealth in their lives as a result of knowing how to network with others and pursue opportunities when they come up.