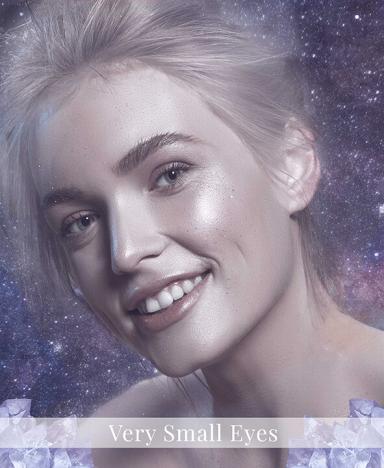 Unlike those with small eyes, very small eyes are not usually eyes that are flattering.

Often people will notice a difference with a person with very small eyes and will describe them as being mouse or rodent like. The effect of the very small eye is enhanced if a person has a very bright eye color. Their eyes will usually appear to be too small for the face and the rest of the head will seem to appear somewhat out of proportion.

Often people with very small eyes will be drawn to wearing glasses as the lenses aids in making their eyes look bigger and the glasses do have the tendency to bring some balance back to their face. The wrong kind of accessories can draw even more attention to these people though, causing them to stand out.

While these people will usually be noticed, there is something that draws people to look at another in the eyes and automatically one with small eyes looks a little bit off.  It is said that a person with very small eyes is someone that is reserved to the max.

Often they will seem almost scared of people and come off as cautious or severely conservative. Usually the reason for this is just like any exaggerated feature, their difference in appearance has been picked on and the person with the small eye can be nervous about their face.

Especially people with very small eyes, they have a tendency to push people away and to protect themselves from judgments. Because of this they hold their personality very close to the vest to the point of being terribly shy. You can often spend a lot of time with this person and still walk away knowing almost nothing about the person.

Deep down the person with very small eyes is shut off from other people. Whether it is truly their small eyes or a more spiritual reason which has been discussed about people with small eyes being very old souls and having difficulty feeling at ease on our plane of existence… these people have a difficult time holding their own in confrontation and prefer to be very careful on where they put their trust. Working with people with very small eyes can be a chore as they are very detail oriented and known for being penny pinching or shrewd individuals.

If a person with very small eyes has other exaggerated small features on their face like a very small nose, ears or mouth, their traits can be exaggerated and nearly make the person insufferable! They have much that they need to work on in order to feel comfortable in their world. These people can also have a tendency to be hyper vigilant, over critical, and narrow-minded.