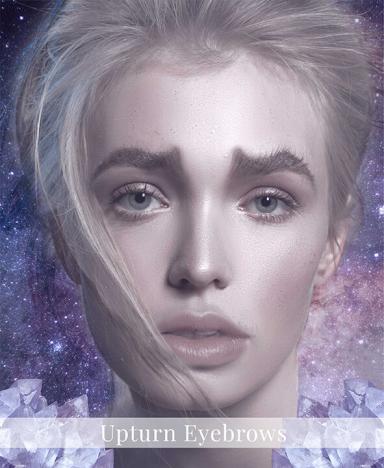 These eyebrows have a dragon shape near the nose of the face.

This simply means that they are broad, balanced, and long, and these people are highly charismatic and attractive. Individuals with these eyebrows have the ability to carry out several tasks, and they are also have captivating with a high level of intelligence.

These people are righteous and have the ability to differentiate from wrong and right. They can read people really well. Their best strength is they are rarely influenced by what others say.

Most of the time, people with upturned eyebrows have a logical, strong, and analytical mind.

This means they rely on their own judgments because they have the capacity to separate facts from fiction. They also have powerful skills for leadership, and most of the time, this bring about a good income and a high social status for their family.

In Chinese face reading the inside of the eyebrows go up and then down, in a sense pointing towards the bridge of the names suggests that there is keenness and enthusiasm. Additionally, they have high expectations. The bearer is focused on challenge. This is an important factor in life. If the bearer takes on a task they are focused on accomplishment.

After completing one task they soon begin to work on next. There can be an obsessed to set new goals and they will meet them very quickly. This can annoy those people around them. The upturned eyebrow bearer is also great at study. If the eyebrow is messy and bushy, there is an eye on future plans. The bearer holds much enthusiasm and optimism and a real zest for life. There can be a severe problem of delay. Ideally new projects need to be started as soon as possible.

As we have already touched on these eyebrows are found on those people that like to take on more and more responsibility.  There is a focus on projects, especially business and nature. In a business sense, this male or female can be powerful.

They will be more than useful in any type of career. Holding a powerful personality will influence many business projects. If the bearer of the eyebrows is not a white suit collared worker it does not matter because they will achieve in any career they choose. Even if they are a bus driver will be finely paid and achieve the best they can be. No matter how much money they make will never be restless. There is enthusiasm for children and once these people become parents they are as committed as they are to work. There is tremendous potential in life for those people who hold upturned eyebrows.

This person can often be quite jealous, not only in relationships but in every aspect of life. The other important thing is that most people with bushy eyebrows are capable of deep love for others.

The problem with the upturned eyebrow person is that they can at times be rather violent and go into a rage rather easily. They like challenges. Essentially they do not like to work with others or under pressure this should be avoided at all costs.

In terms of the upturned eyebrows on a female this is associated with being generous in life and being irresponsible with money. The female will cope with any conditions and can be rather possessive and suspicious of their partner. They will be however amazing at their career.