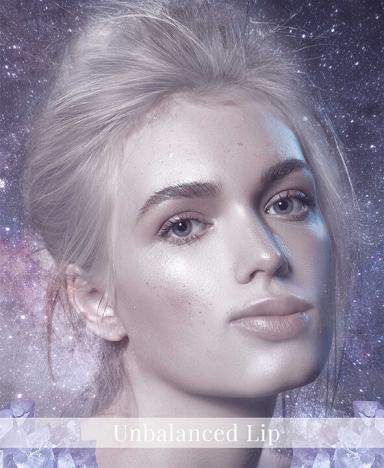 Changes to the face when one get’s older is evident.

In this case, the unbalanced mouth is normally found on older men and women (over the age of 70). This mouth marks a loyal, cheerful and affectionate person, who is ready to help in life, they are, as a rule, probably more content in a partnerships, even if platonic.

People who have such an unbalanced formation can at times be stubborn and tend to have an opinion on many issues, especially about politics, and what is right and wrong in life. If such features are seen on a person at such an early age it shows triumphs over difficulties and conflicts.

The bearer of such a face are natural homemakers, and settle down easily. If seen in youth they have a reputation for a short temper. They sometimes like arguing – but only to get their point across. That is why they get what they want in life. It can sometimes be hard to even work out how this person feels - as they often struggle to know their deeper selves.

If the two corners of the mouth bend in the opposite direction of each other this marks an increase of flippancy, to the point of not caring what others think. This can be a positive attribute. They easily surrender when they encounter a strong opponent. When they are faced with responsibilities, they easily leave them for other people. That way, they are not the best in maintaining long-lasting relationships, but they are more comfortable in a partnership.

There is a focus on trying to balance things in life. Intellectually, these people are highly developed which means that they have a tendency for a strong imagination. This is a positive attribute, making them intuitive, ingenious and able to have great reasoning power.

The one negative trait is a lack of motivation if bored in their chosen careers. They are happy to work hard until late into the night but afterwards will sink into their own world. For they are always trying to balance things. Unpredictable, they can change from being content to unhappy in one moment. If the mouth is thin and unbalanced in ancient Chinese face reading books it denotes that they struggle to get on with close family.

They usually have many friends but find it hard to conform to the family rules. At an early age this was the person that always seemed independence, at times moving far away from the family. Even though they are independent they are curious. In terms of career, they are not interested in material rewards, of course they like to be paid a good wage but they are primarily motivated by a desire to do something worth-while. This can be either charity work or helping others.

There is a natural desire to conquer life. Care should be taken in the type of career that is chosen. There is a tendency to devote time to counselling, religion, law and teaching. This mouth will be found on someone who can employ their versatility and power to the full.