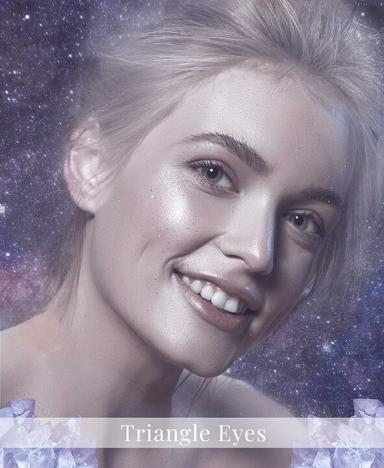 Triangle eyes are not a common shape.

Typically the point that causes a person’s eyes to appear triangular in shape is not truly the eye shape, but rather a drooping eye lid that has a slant which cuts off the true shape of the eye. The eyelid itself can create a sharp triangle or a soft triangle.

When you see a person with a firm triangle shape they will have a harsher appearance overall as the shape of the eye will affect their entire face. The same effect is true of a person with a soft triangle; however, they will seem more approachable. An interesting note is that harsh triangle eyes tend to be seen on men’s faces and softer triangles are usually on women’s faces… thus the looks can be “masculine” or “feminine” in effect.

Just because their eyes create a reaction or startle people around them… sometimes even making people uncomfortable does not mean that people with triangle eyes are as harsh or stern as people think they are! In fact, triangle eyed people tend to be very keen, receptive, and empathetic people. They are often content with watching the situation before reacting and the fact that sometimes they are left out or on the fringe of social circles is fine by them. This gives them the time to assess the situation.

It should be noted that because of the empathetic nature of people with triangle eyes and that they are keen observers; they do not take kindly to others being mistreated. They tend to notice variances in body language and are often the first to pick up on subtle clues about the true feelings of others.

They are also aware of people who are fake or dismissive and they will not continue to remain quiet. If you are in a group of people and someone butts in with a harsh judgment that seems to come from the left field, do not be surprised when you look at this person’s face that they have the trademark triangular shape!

If a person with triangle eyes feels that another is being abusive, unfair, or rude they are bound to speak up and do so in a loud and authoritative manner. Because of this, people with triangle eyes tend to make good leaders, teachers, and people of power. They are naturally fair and patient, but not fearful of conflict if needed. Their demeanor is one that will be taken seriously no matter the size of the person as well.

However there can also be a negative side to those people who have become bitter because of how they have been treated. The emotional awareness of triangle eyed people causes them to be guarded, vicious, or resentful. Those with triangular eyes can be very misleading because they look nice and open on the surface, which makes us feel attracted to them, but they are easily envious of others and greedy when it comes to what other people have.

They secretly look for opportunities to take and benefit from others. Even from friends and family. When their plans go awry, they could even make things worse for the people involved as some sort of revenge.  When life events go out of control those with triangular shape eyes will respond in a clam and are always gladly able to help. But this is only because they expect the favor returned at some point in the near future, as if you owe them.