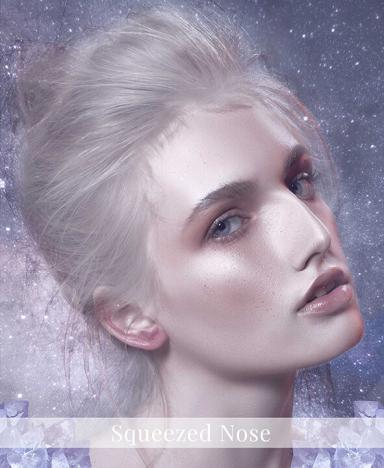 Such a nose type is commonly identified by the central portion of the nose, which appears squeezed in an inward direction with a very narrow and small mountain root.

This nose is perceived to be ill–fated, especially on matters of their health.

There is the presumption that these personalities will always end up sick. In the event a person recovers from one illness, another will strike. As much as they do not suffer from a major illness in their lifetime, they usually suffer from less serious diseases that always recur. This does not affect any of their duties, either in the short or long run, but rather affect their strength of mind.

Poverty does not easily creep into their lives. As much as they may generally feel sick most of the time, they have the strength and motivation to work and earn a good amount of wealth. They have a passive approach to wealth creation.

They do not possess the strong will-power to struggle and earn more. That means that they are not very aggressive by nature, and anything they undertake does not usually involve a lot of struggle. They are also perceived to be so reserved that they do not easily poke into other people’s business.

Some people relate their squeezed nose to a health palace that harbors either good or ill health, but in most cases, this type is denoted as a ill health palace.

There is a point in their life when they experience shocks and turmoil, and this is believed to be in their 40s. It is believed at this point that they are likely to suffer from serious health problems and economic and social strains.

This period is usually known as “the period of crisis”. Usually, it becomes the turning point to most people and may determine one’s success or total failure. It is believed to determine one’s fortune or distress in life.

The subjects usually participate in projects that are less industrious. Usually, they love working in reserved positions that are not so involving, and hardly do they like to be scolded or even ambushed. They love the company of young tucks.

On the other end, they are believed to be passive when it comes to falling in love. However, they appreciate good and cool relationships. They have long-term relationships and friends, but no close ones in particular. They also believe that friends are part of their success.