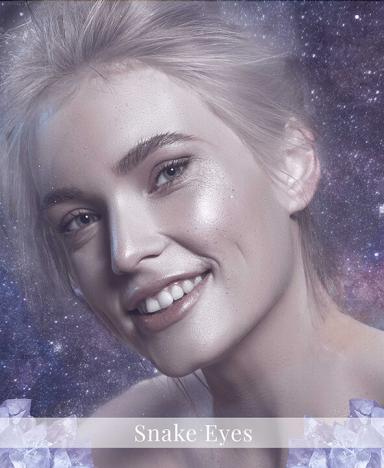 Snake eyes are typically identifiable when a person has small, beady, round eyes that have very thick eyelids and small pupils.

The bottom part of the eye will almost form a straight line from corner to corner, while the top part of the eye will have a large curve at the center and will slant down at the outer corner. Quite often there will be red lines that are very noticeable and can be seen inside the eye as well. These characteristics can also be used to spot a highly intelligent individual, and though a person of this eye type is quite brainy, their intellect is rarely used for the greater good.

If you haven’t heard of the term “snake in the grass”, now is a good time to think about what that saying really means. When dealing with a person with snake eyes, you will want to be very aware that this person generally has intentions of ill-will, even though they may try to hide that fact from you.

What makes this worse is that they will act ruthlessly and later on show no true signs of remorse or guilt. In this case a high intelligence is paired with a duplicitous moral character. This means that this person will outsmart and outwit most people and will do so with malicious intent.

This snake eyed individual will stop at nothing to get their way, should something or someone become an obstruction in their path, this person will undoubtedly employ a cunning tactic to remove their obstacle. People with snake eyes will strive to outrival their peers and they don’t care about what they need to do to excel, and since this person has little to no moral standings, they also don’t care who they step on as long as they are getting what they want. The ability to lack principles is sometimes envied by those who feel that they are the ones being stepped on, but they are a lot of things that may cause this way of life to be highly unattractive.

A plight that this person will face is that their personality makes it very hard for other people to be around them. This is especially true of co-workers and anyone else they may network with, because once they are caught being underhanded, or are seen knowingly throwing someone under the bus, they will carry with them a reputation that they will not be able to shake.

The reason why their social standing will remain to be so poor is that they won’t be able produce enough positive attention for themselves to take away the negative feelings that people have toward them. It’s bad enough that they will have a hard time making friends, but they also will find it difficult to maintain healthy relationships with members of their own family.  In fact, a person with snake eyes does not harbor any kind of family loyalty and they do not comprehend or adhere to the idea of a family unit. It is extremely rare for this person to be loved or even well-liked by others.