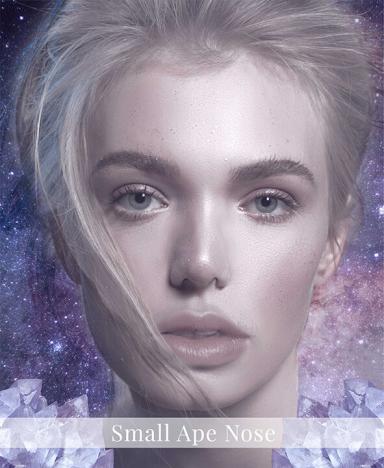 It is more or less the same as the big nose, but this nose is smaller in size because of its smaller nose bridge, it is also rather "thin" in shape. So what does this nose mean?

People who have this kind of nose are believed to bear traits such as impatience but they are super cool and loyal. They do not have the capacity to withstand anything for a long period of time without running out of patience - this is not always a bad thing. They always want things to be done quickly and in their way or just within the time span they may think is reasonable for them.

They do not withstand the test of times, and in most instances, they give up before losing. Moreover, they are very loyal. As they pursue their dreams and goals in life, they are usually careless and do not take much time to make a decision or choose between right and wrong. What drives them is the desire to satisfy their needs without judging the course and aftermath of them. Recklessness is mostly part of their behavior because they do not care so much about what may befall them.

They have the ability to react quickly and think swiftly and sharply. Whenever they face a circumstance that requires an instant and abrupt decision, they are perfect in facing it. They have an intelligent mind that adapts to any kind of situation or circumstance.

They also lack a little bit of self-control; it is believed that they do not have the capacity to control themselves even in small matters because they have a lot of anger. As much as they may know that they need to do something, they have the tendency of refusing to do it and touch and feel things for themselves. For instance, if they go out shopping, they cannot easily let something off without touching it.

People with such a nose do not like doing specific things for a very long time. More often, they are engaged in crafty activities and do not like being instructed on what to do, when to do it, and how to do it. They are known as knotty and need their own space to bring out new ideas. Most of them do not have self–control. As a result, they cannot be taken to be armatures in any kind of an undertaking as they always believe that they know more than any person does.

They are believed to have poor relations with people. This is usually exhibited among the few friends they have, their spouse, and their family members. They do not have many friends because of their poor character. They also quickly fall in and out of intimate relationships.