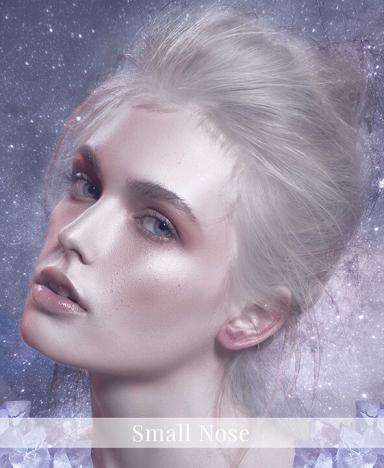 People with a small nose are thought to be easily offended and there is certain personality traits.

This means that they often come across as being reserved. In most cases these people are self-composed. They do not portray the attributes of expressing themselves in a boisterous manner. They are the exact opposite of large-nosed people. On the plus side, they are generally good looking, they enjoy repetitive tasks and in several cases like to feel that they are always in control of their future.

They are deemed lucky and to a greater extent pursue careers that enable them to relax in the evenings. When one has a small nose with a slight bump at the end this represents a family orientated person. They are believed to have an inbuilt intrigue that makes them strive to achieve a better life. Material possessions take center stage. It is eminent and common that people with such a nose type have the tendency of accumulating material wealth and possessions.

In some cases, the nose may appear to be tiny. In such scenarios, the individual has a higher affinity, even, an obsession with wealth than other people. They are actually thought to be in love mostly with their wealth than anything else. Such people will be deemed to cause fear and even be feared by some of their close allies and associates. To have freckles on a small nose means the holder has a splendid reputation. To be a woman with a small nose means that in a battle of wills they will always win -- crushing and causing havoc to their opponents!

Decision making is one of their main challenges, especially when faced with situations that require a quick and binding decision. On a negative note, the small nosed male is someone when faced with a dilemma that requires urgency, may hesitate. In such circumstances, they end up making the wrong decisions or not making a decision at all. It is believed that people with small nostrils like to be loved by other people and in most cases, their autonomy in decision making is determined by other people. A small nose that is also quite wide means that a person will undertake a journey to unknown destinies and territories.

There is the common belief that a smaller nosed person takes great pleasure in exploring and encountering new challenges as well as gaining new experiences in various careers. They love personal development and growth in fields such as academics and wealth accumulation. Moreover, they are believed to have faith and often put their trust and strength of success in the world. They are often carefree.