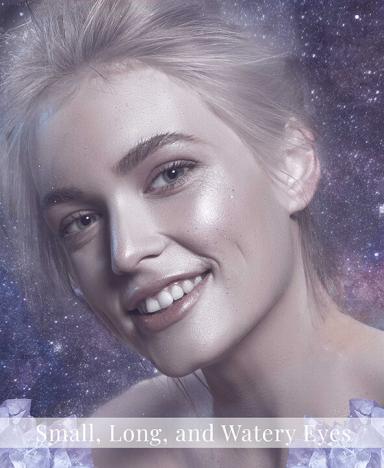 These kinds of eyes are a relatively common eye shape and people that have eyes like this are generally quite intelligent, open emotionally, and well-balanced.

The watery feature of the eye is balanced out by the shape and size enough so that the person is able to function being an emotional and receptive person. Small, long, and watery eyes is a feature which is attributed to people having sexual openness and being able and willing to express themselves in healthy manners.

They do have a tendency to overdo their behaviors and thus are often seen as being wreck less or wild because they are not loud or gregarious. They simply hop into action and have the confidence to think that they can pull off stunts.

The driving factor for people with small, long, and watery eyes is not a sense of pleasing others, but rather of challenging themselves. Because of this they often will be drawn to partners that are not initially attracted to them but will thrive on the challenge. They have the ability to appear sultry, seductive, and mysterious and in that they are able to get what they want. Their movements are often cat-like and even the most round of people with small, long; watery eyes will have a gracefulness to their posture and stance.

These people are able to win over the toughest critic and say just the right thing to win people to a cause. They are not liars but they do have a tendency to stretch the truth. Being skillful with speech and the ability to win people over through their oration is knack of those with small, long and watery eyes.

This skill enables them to gain speed in tasks and usually will land them on the spot. This can bring them to the spotlight and be a boon for them as they do like attention but they are not ones to try to be in the middle of everything.

Because they do have a generally well balanced emotional outlook they have a tendency to look on the bright side of things. When they are faced with disappointment or realize that things are not what they seem… this is when they tend to lose it. Small, long, and watery eye people do have a need to be in control and they find that their way is the easiest.

Unfortunately, people will not always agree with them! This conflict will cause them to back away and close in on themselves. They can get prone to depression because of this.

Dealing with these kinds of people requires allowing them to be in control of the situation, even when they say that they don’t want to be.

If you ask them what they prefer then they will probably tell you that they don’t know but really this just means that they need more time to think about it. In the end they are certainly going to tell you what they think and feel and always expect that you are going to respect that.