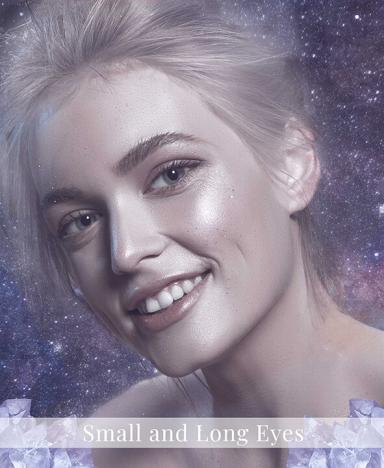 Very small and long eyes usually tend to appear open and like a very large almond in shape.

The shape is not as important as is the fact that the eyes that are small and long tend to be open and inviting eyes, yet they are still smaller on the side.

Like most people with small variety of eyes, people with small and long eyes have a tendency to be direct, detached, and cool when you first meet them. They also have the habit of keeping other’s at an arm’s length and not trusting easily. The difference between the tradition small eyed person and the small and long eyed person is the way in which they tackle people and handle a problem.

Those with both small and long eyes tend to be forward-focused and they will be very mindful of the task at hand. They are planners and have a strategy. They will be wallflowers still and on a social level it can prove to be a challenge to get them to open up but they are not reserved for the same reason.

They will still notice everything and be mindful of actions of those around them but they tend to be more open minded and less judgmental. They are firm in their own beliefs and generally comfortable allowing others to be the way that they are so long as they do not feeling pushed or influenced to be something that they are not.

With people with small and long eyes, often what you see is what you get. They do not hide themselves and they will not change their behavior to suit their surroundings. That being said, they do usually have good posture, an understanding of etiquette, and a natural awareness that proves their behavior to be even keeled and balanced around others. They are self-aware of their actions and generally continue their proper behavior at home just as they would t work. They do not mold their personality to fit changing environments.

People with small and long eyes are known for their calculating minds and they tend to always have something up their sleeve. These are not people to tangle with at cards or about a subject that they are well-read on as they are likely to know even the most trivial and mundane of facts.

This is because when something draws their attention it keeps for a very long time. They are not flighty or picky kinds of people. This behavior may not make them the life of any party, but it does help them to be well-liked and accepted in professional type communities.

People with small and long eyes work best on a team where they are given appreciation or feedback for their work. In relationships they tend to have a broad sense of balance and like a relationship where they can find a partner who submissive to their demands but outspoken about their own things. Often these people will be with others that have different opinions, religions, or hobbies but be perfectly fine with that.