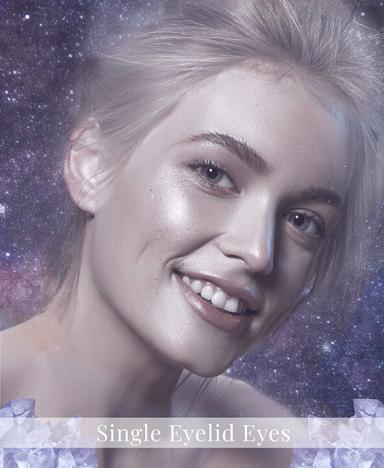 Everyone has one eyelid but the way that the eyelid folds over the eye can denote more about the shape of the eyes.

The most ideal eyelid type when it comes to being considered beautiful or attractive is commonly the single eyelid eyes. Women especially with these eyes are seen as being younger than they are but it is simply just the way that her eye is shaped. The single eyelid eye is one that is wide and open, often reflective. Light colored eyes with this feature will often have a pool or deep feeling to them that draws people in and it is not uncommon to be complimented on the beauty of the eye.

People with this eyelid type are open people and usually pleasant to be round. They have a pleasant disposition and are sociable. They can be direct but are rarely rude or blunt types of people. Rather, they can separate social connections with work or more serious relationships. While people will be easy or lay back around them these people will keep a group on task if need be. This is because they are good with breaking down rules and setting boundaries.

These are the kind of people that make good leaders and do not mix emotional connections or confuse friendships with something more. People tend to trust people with this kind of eye because they know that they will be dealt with fairly and therefore can trust that their needs will be met and their voices will be heard.

People with single eyelid eyes are typically fair and because of this they are able to play multiple roles for people. They may find that they are the parental figure amongst friends and the one with an even head. They are logical and prefer rules over drama.

They will instill an anti-drama policy in their lives and rarely will you find the single eyelid person around a bunch of theatrical troublemakers. They don’t fall into emotional outbursts all that often and are described as having a long fuse. However, if you try the patience of the single eyelid person then you will know their potential for vehemence. These people, because they can be pushed so far before exploding, will unleash a fury if pushed to their limit. They know how to put people in their places and how to make just the right cut to a person to make them think twice about crossing the boundary more than once.

Because of their nature, single eyelid people can be very understanding and open but if provoked they will fight tooth and nail to make sure that justice is done. They can be quite vindictive if pushed as well. They are not the kind of person that you want to cross! Be careful of overstating boundaries s well because they are not the kind of person who will take kindly to being treated like a doormat.

In a work relationship they are easy going bosses and employees.

They are good partners in romantic relationships as well and often attract people that will complement their ways of living. They like to be around people of varied interests and will not count someone out because they do not like the same things as they do. While they like to share their interests with others they also value time alone and usually are not people who are needy or dependent.