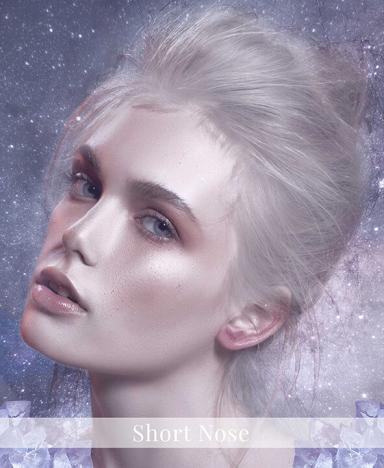 A short nose is characterised by being proportionately shorter than other facial features.

The short nose is often upturned at the end. This nose is often inherited. People with this nose are talented in terms of thinking and imagination. Normally creative, it is believed that the bearers of a short nose have great mental activity and are adept. They are quick decision makers, especially when dealing with situations that are tantalising and often requiring a quick result.

Their imaginative and creative mind makes them some of the most unsuspecting characters when undertaking tasks. It is common to find these people impatient when they are faced with a challenge; they easily want to get an answer, and as a result, they easily lose their temper. The challenge for this person is to stay calm. If a child has a short nose, then they are likely to be rather demanding and quite active.

On a negative note, the short-nosed person can conjure unsuspecting individuals into traps or even circumstances that are unpleasant. However, on the positive side, they help people solve problems so easily and even end up being innovators and inventors of new ideas. They often like their work completed quickly, and if any delay occurs without any substantive reason, they can lose their temper.

They are believed to work so well in places that are not involving and pressing. They are also believed to work best in performing arts. In some incidents, they may be prosperous leaders. They are easily confused when faced with several compromising scenarios, and as a result, may end up not making paramount decisions, as compared to when they are faced with a simple situation.

They have a great weakness when dealing with relationship issues. It is believed that short-nosed people find it hard to maintain lasting relationships due to their natural tendency to flirt.

The person with a short nose holds wisdom, serenity, understanding, and comprehension. She is frequently called the protector of the subconscious. Your woman sits while guarding a thin veil of consciousness, which is all that divides us from our internal selves. The High Priestess is aware of the key of how to access these realms. Your woman signifies religious enlightenment and interior lights, heavenly information, and wisdom. She has a deep, user-friendly knowledge of the Galaxy and utilizes this information to teach instead of to try to control other people. She typically appears in a Tarot reading when you need to listen to and believe in an inner voice.