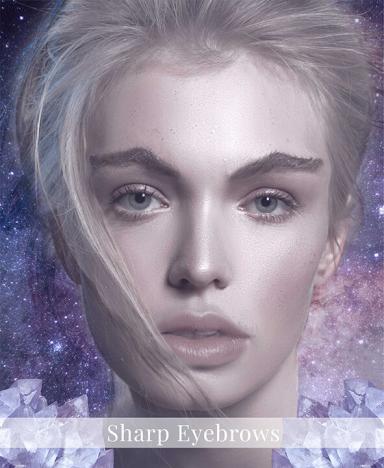 These people have sharp eyebrows that appear as if they are tapering out into a broader stem right at the corners.

The eyebrow hair is normally thick. Generally, people who have such eyebrows do not make good scholars. They are timid and tire easily; this can be traced to their lack of self-esteem. They have dreams of becoming important one day.

They are often confused, and at times they think that interfering in matters that don’t concern them will make them win people over. They have a hard childhood life, which in most cases, turns them into people that can handle anything.

Sharp eyebrow hair is normally thick and a strong definition to a person’s face. This natural style goes in and out of style with fashion times, but it is hard to hide the feature because plucking or waxing often results in an obvious missing patch of hair. People with these kinds of sharp eyebrows, that are often full or even bushy, are generally direct, intelligent and direct to the point. Associated with smart people, either academically or street wise, they pick up and retain information well.

Interestingly enough, they generally do not make good scholars. While they have large pools of potential, they can also be quite timid and tire easily. This can be traced to their lack of self-esteem, and can be exemplified for those that happen to have this kind of natural brow when it is not in fashion.

In comparison, there are also people who have sharp eyebrows that have the defined and predominant shape, but the amount of hair is less. Because sharp shapes are often wide, taking up a lot of real estate on the forehead, lacking enough individual hairs to cover the entire area can lead to a patchy or wispy eyebrow appearance. These people will have the same inherent intellectual abilities, also noted for their quick wit, but they are often more vocal and less shy than those with fuller forms.

Both types of people with sharp eyebrows have dreams of becoming important one day. They are often confused, and at times they think that interfering in matters that don’t concern them will make them win people over. This kind of thought process can begin early in life as they are inquisitive by nature but lose their childhood innocence or naivety early on as they realize truths in the world that others sometimes don’t notice until they are grown. Depending on parents and environment, this can mean a hard childhood life. Arguably, the more difficult it is for these people in their early years, the easier it will be for them later on because adversity promoted understanding with people with sharp eyebrows, which in turn, will usually transform them into adults that can handle anything.

Sharp eyebrows indicate someone that appreciates a challenge. Their intelligence is their strongest ally, but also their weakness. These people analyze and think about everything, seeing a stream of possibilities for the future. They lack strong intuition and must rely on learning to have a realistic view of what is going to happen because they view the world from their own perception.

The downside of having sharp eyebrows is that these people don’t really have control over their future, but they do have the understanding of this. They never feel free and are sometimes restless, seen as preaching or arrogant, moving between social groups or even physical locations and never settling down in one place. Even if they live in the same hometown their entire lives it is likely that they will change jobs frequently, have difficulties sticking to one hobby, project or cause. Because of this they come off as flighty and immature, afraid of commitment. This is unfortunate since at the base of it, they do really care and they want to fit in, to be accepted.