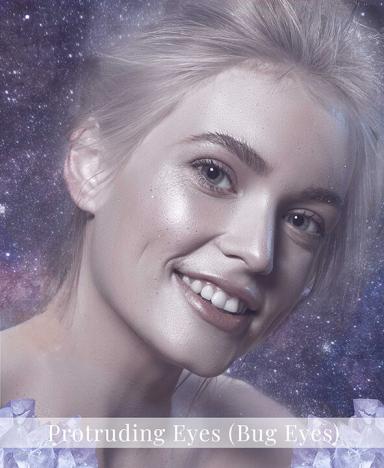 Protruding eyes need to be distinguished between people that are born this way and people that have health conditions that cause their eyes to appear like this, even though it is not their innate physical design.

Conditions such as histiocytosis, glaucoma, orbital cellulitis, and hyperthyroidism can cause the appearance for the eye to seem protruding. Of course, it isn’t always easy to tell and you aren’t going to be Mr. or Mrs. Popular if you go around asking people why their eyes are the way they are! Simply take caution before jumping to a conclusion when you read a person with protruding eyes as they could have an underlying cause and therefore cause your assessment to not be accurate.

When you are focusing on someone with protruding eyes it can be difficult not to stare. Often these people will look like there is something not quite right with them. In the case where their eyes are protruding but also have a shallow eye set they can even look bizarre to the point of making people around them uncomfortable. This is not all that uncommon. It is not just the way these people look that are an issue for making you feel uneasy or uncomfortable.

In fact, people with protruding eyes have a habit of being very open to other people to the point that they have a tendency to be psychically aware and receptive. These kinds of people will often seem to know things about you whether you have told them or not and they also tend to be open or frank about their observations.

One theory is because their eyes are forward facing and this represents the focus of their own minds. It could also be that because they are so focused on you and people tend to allow their minds to wander when they are nervous. Either way, they have an ability to pick information out of the air and use it for their own disposal.

Making people with protruding eyes uncomfortable can mean that you are in for a tough battle. While these people can be quite reserved, they are not going to back down from a fight. You do not have to be openly hostile with these people either!

These people are of the mind that they tend to be very sensitive and they will ultimately lash out to even the slightest of rudeness… whether it is intentional or not. It is best to be careful with people with protruding eyes as they can also be calculating and callous and try to get the upper hand. These people realize that knowledge is power and will make their own assessments of you based not only on what you say but also on what you act or body language. They will use your own behaviors against you if it causes them some amount of gain.

If you find yourself in a standoff with a person with protruding eyes, the best plan of action is to walk away and ignore them. Do not engage. Really it is the only way to truly win with people like this as they will keep on at you until they break you down.

Relationships of any kind are difficult with these kinds of people are require you to be of a certain dominant mindset to make it work. Of course people with these kinds of eyes are not all bad… but deep down many of them have to fight against the negative urges of their nature. Understanding the way that they are personally can make it easier to navigate and have a lasting relationship, friendship, or social acquaintance with them… so long as you don’t get on their bad side!