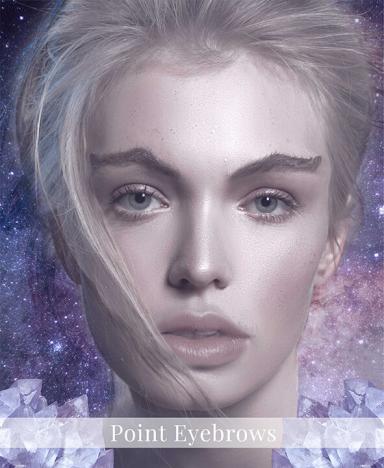 Eyebrows with an uplift can be easily noticed, but have a slight bend that has been curved towards the outer edges.

These are simply known as point wing eyebrows or rising eyebrows. Such eyebrows are common among prominent personalities.

These people are highly courageous, intelligent, and can fight for the rights of the weak and oppressed people in society. In their lives, they always have a positive outlook that enables them to achieve desirable results.

These people come from poor backgrounds, they have the capacity to overcome their obstacles with great force. Because of this, they become highly successful and healthy. Perhaps their major drawback is their ego.

The bearer of sharp eyebrows is a wonderful person they have great characteristics. The problem is many people don't actually understand them. This can lead to problems especially romantic. The bearer of sharp eyebrows can alleviate these problems by trying to communicate better with others. They also won't work well with less fortunate people. Giving advice and succeeding in fields such as advertising, acting, public relations and writing. They develop a workable philosophy in life. Being creative is important to them. The sharp eyebrow person should try to not get too wrapped up in other people's affairs.

They can bury their head in the sand. Hoping problems with just fade away. This is not always the case! Multitalented they will normally have many fingers in many pies. They are incredibly sensitive, especially to criticism. They have a good understanding of human nature. This can cause some minor problems because other people were generally not really understand why they know so much about them!

Chinese facial mythology believes the sharp eyebrows indicate that they will have a good education make the best of what is given to them. They have a natural interest in the public. Perhaps some type of charity work would suit the bearer of sharp eyebrows. They dislike playing second best in life and are happiest in a position of authority.

They serve well in fields such as psychology and counselling. For the eyebrows to be slightly long in shape can indicate action and assertion in life. Dreams of a better tomorrow all normally true.