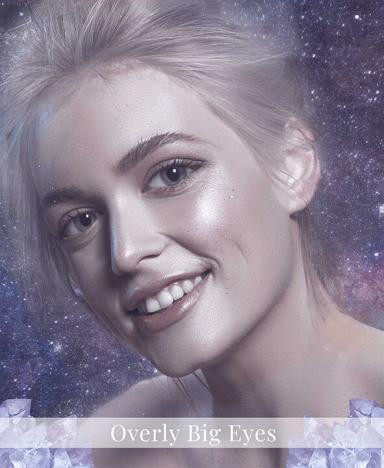 When you meet a person that has overly big or large eyes, be prepared for a very wild ride!

People with this feature often have large and easily excitable personalities and the eyes are usually the main focus of their face. You will be able to tell the difference between the person with big eyes and overly big eyes from the fact that the eye looks like it is slightly disproportionate for their face. Unlike people with disproportionately small features on their head though, large features are usually more accepted and intriguing.

For some reason large facial features tend to indicate a ‘more than’ personality and can be easily taken with or take in the people around them. They will be used to hearing about how pretty their eyes are or how remarkable they are, so be prepared to throw on a different complement than that if you want to impress them!

Like people with big eyes, overly big eyed people have a tenacious personality and are quite social, gregarious, and extroverted. However, when a person has larger eyes than the standard big eyed person their behaviors can be sometimes considered over the top and inciting drama.

This is caused by the person trusting too easily and being overly sensitive. When they are open with a person they tend to be blunt but completely honest. Some will say that they come across as being rude, but usually they are just telling the truth. Big eyes in general are a tale tale sign of the astrological fire sign but overly big eyes tend to have a lot of Sagittarius in their charts. Much of their personality traits are aligned with this zodiac as well.

Generally, people with overly big eyes are attractive but not overly so. They are usually considered pretty, engaging, or handsome. Even the mousiest of individuals will tend to stand out when they have overly big eyes.

This is not something that is lost on them either! They have radar for those that are interested in them and will attract them because they simply love the attention. They can have a needy personality if not kept in check and need to have people around them to feed them approval. Innately they can also be unreasonable or demanding as they are very picky in their likes and dislikes.

If you are considering a relationship with a very big eyed person, understand that this person is likely going to need to be the center of attention. They not only like having the focus on them but they want more than just compliments.

They also want to have appreciation and to be valued for more than just a pretty face. People that tell them what they need to hear can also pull the wool over these types of people’s eyes as their need to hear positive feedback can encourage their natural gullibleness. This is unfortunate for them but even more so for the person that does the burning as a person with big eyes will often lash back and can be very vindictive when hurt.