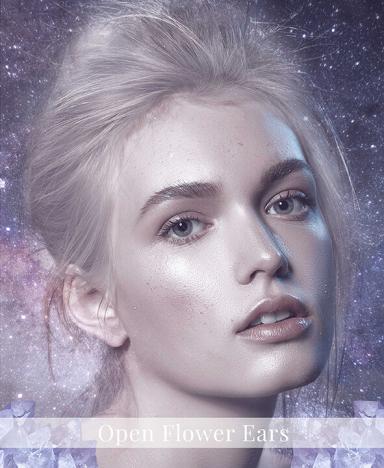 A person with Open Flower Ears is a person who you can trust, but it’s not easy to notice that right from the get-go.

You tend to feel that you can connect to them, they seem open, extroverted, fun and genuine. But why is that? It starts with the face. When a person has Open Flower Ears their faces are opened up by thin but outstretched ears which can sometimes be wavy or even separated in a way which gives them the overall look of having a flower ear, with varying segments giving off the petal-like look.

The ears tend to be somewhat low set on the face, but open up the face so much that general appearances being what they are tend to encourage others to really trust them with pretty much everything that they have or are. When a person has Open Flower Ears you might think that they have it made because of the fact that they seem so pleasant, but unfortunately these particular ears are an indicator of the poor health of the person and the fact that the body is not physically processing things appropriately.

Usually fluid displacement or even circulation problems occur throughout the life of the person with Open Flower Ears. They struggle with it constantly and tend to be very self-conscious about their ears overall. As children they tend to feel as though they have a huge purpose in life until they are berated by others or mistreated and then they spend much of their adult life having a difficult time connecting intimately with others. Regardless, they tend to offer as much help as they can to those around them and who are beloved. This makes them have a delicate appeal to others which makes them want to be around the Open Flower Eared person as often as they can.

They are magnets for new people and their personality blossoms despite their health concerns. They become attracted to those who are going to bless their lives, and tend to steer clear from those who are in any way outwardly deceitful or who appear to be not trustworthy. For them they would rather be alone than trust someone who can hurt them, for this reason it takes them some time to really open up. But when they do there is a chance for the interaction to be a beautiful thing.

The personality of the Open Flower Eared person tends to attract many different kinds of people, but they have a hard time connecting to reality in certain relationships and will often find themselves pursuing someone who never really gives them the love that they deserve back.

This causes them to have some emotional and commitment issues in life because they will do almost anything to avoid getting hurt. As a defense mechanism they tend to try to pretend that they are not hurt when others do hurt them because they don’t want anyone to see that they have a soft interior, but you can see their hearts right from the start---they let it hang on their sleeves for all to see. So be gentle with the Open Flower Eared person and they will be a wonderful addition to your life.