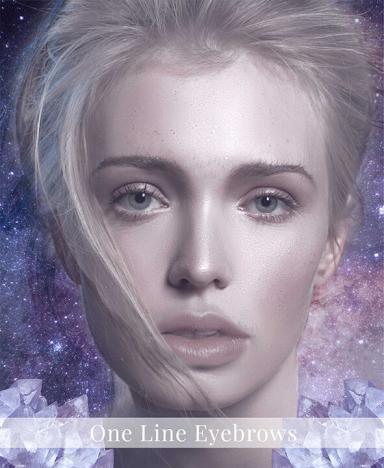 These days it is not always easy to point out the unibrow, but because of the large personalities often associated with them, chances are you can usually take a guess who had a one line eyebrow at one point in their life at least.

The one line eyebrow got its name because it resembles one straight line across the face. Many people also refer to this type as a “monobrow” or “unibrow”. While many people, especially women, will go to great lengths to hide a single brow feature, the trait in fact is a highly regarded one in several cultures. Most western cultures reject the one line eyebrow, preferring to shape and pluck into a more standard dual appearance. This does not undo the trait that is inherent in the person, meaning that even if you try to hide your single brow, that you still will have the influence and the meaning of them still applies to you. That being said, it can sometimes be hard to tell if someone has a unibrow, especially if they wax or use other long term means of hair removal.

The main strength of people with this eyebrow is that they are direct and straightforward.  Combine this trait with the fact that often these people will also appear that they are larger than life, having a presence or energy that is beyond them. They have a good personality that is as clear as a freshly cut jewel, meaning that it does not have any non-wanted features and irregularities.

Another common trait of people with one lined eyebrows is that they have high levels of self-confidence that is reflected by the way that they act without hesitating; they generally do not like procrastinating and delaying things. Always on the go, the first to arrive and the last to leave.

They do not get stressed with problems in life and move quickly to solve problems. They never follow the majority vote, but rather go with whatever seems right in life. Other people’s decisions will not influence their decisions easily. The one-character eyebrows are usually very focused on their targets, meaning that they arrange their actions so they can meet their goals in life.

The negatives that are most commonly associated with one line eyebrows is those that are placed upon the person with this brow shape. As stated earlier, it is modernly accepted to remove the appearance of the single brow. Children as young as grade school age get picked on because they may look different, especially if they have long eye brows or twirling eyebrows, they may have difficulties. Naturally, people with one line brows are open minded and opportunistic, trusting possibilities. These people can have a low constitution though and since society can be down on them from a young age, they can get worn down and appear bitter or shy away as they get older. This can result in depressed tendencies because they are at odds with who they want to be and who they are.