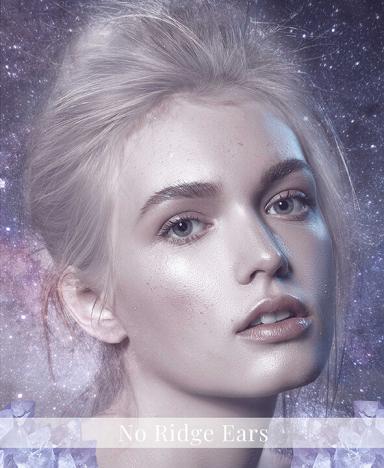 There are those in this world who have no particular ridges on their ears, despite the fact that that sounds strange to the person who does not study ears.

The person with no ridges in their ears basically just does not have a ridge. There is no actual defined area that could act as a ridge; the ear itself is just flat with the canal in the center. Sometimes the ear can be round, pointed, triangular or even diamond shape.

But the common theme is that there is no actual ridge to characterize the ear, therefore it is a characterization unto itself. Since the ear itself lacks any definition, the person tends to match this very same description. A person with No Ridge Ears is a person who tends to be somewhat bland in their lives; they have no defining characteristics which make them stand out.

You might pass them on the street and not really notice them. Individually they feel that they walk this world as invisible souls and they have no real attachment to much, if anything at all, which goes on around them. Generally they also endure unfortunate health scenarios growing up; often they will have some kind of childhood disease or illness which inhibited their ability to develop socially with other children. This can be the case with immune deficiencies as these individuals need to be kept away from others who might be sick so as to avoid getting terribly ill themselves.

Despite the fact that their personalities can be rather flavorless, the No Ridge Eared person tends to charge head on into projects which are important to them. And because of the fact that they hurry in so fast, they tend to not really plan or think ahead of themselves and can cause a lot of problems in their wake as a result.

They tend to be overly impulsive in life which is how they get the attention which they so desperately seek. Since as children they were probably very weak, as adults they do ‘death defying’ stunts to celebrate their new found freedom to be able to do whatever they want in their life, to make of it what they will. For this reason they don’t tend to have a lot of need for preparations and tend to be somewhat carefree and a little hasty even in their decision making processes.

They tend to also be very interested in all that is beautiful in these world, particularly beautiful persons. With this, if they are in a monogamous relationship and run into someone who is beautiful on the street, it is likely they will turn on their charm and try to get to know this person regardless of their current relationship commitments. They are distracted by all that is twinkly, shiny or lovely as a result of an ‘inbuilt’ insecurity, love to have these people or items around them at all times. Unfortunately because of the fact that they are insecure about their overall appearance and personality, they tend to believe pretty much what anyone will tell them and take it as the truth because for them, beauty IS truth.