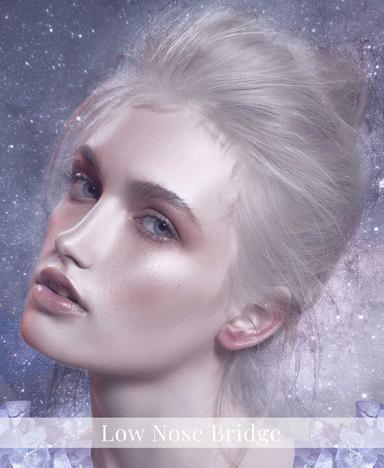 By having a view from the sides, the nose appears sunken or low-rising.

Therefore, the nose bridge appears sunken. It is believed that individuals with such noses are naïve. This is a major weakness, as it puts them in situations that make them vulnerable to deceit and gullible practices. Naivety does not do them any good, but it only makes them believe in other people more than they do in themselves.

They always lack the ambition, drive, and fire to pursue their goals. It is believed that they do not have the intrinsic urge to pursue their achievements. There is nothing that can make them work hard to achieve their goals and purposes in life. They lack the will power to either help other people or themselves.

Individuals with this nose have a very low self-esteem. They do not have a strong belief in themselves, because at the point where they have to face real life situations, they simply take a low perspective about their self-image and cannot withstand such by themselves.

These persons are lazy and do not have the motivation to work hard to achieve their goals in life. They are believed to expect more by working less. They hardly succeed in any of their activities and always tend to sway from whatever objective they have to accomplish in the due process of their lives.

It is believed that they do not have the initiative to begin any kind of progressive activity. This is partly due to their lack of mental capacity, as well as the will power to enhance any of their set goals and objectives.

They also rarely make it in business; all their ventures usually end up failing. They do not possess the qualities that may guarantee them the capacity to be successful people, but rather can be helpful in assisting other people achieve their best and get to the top, but cannot get to the top themselves.

When they face situations that require their personal attention and decision-making skills, it is  clear that they cannot make a decision by themselves, but rather  to rely on other people to make a decision for them.

In work, they always need orders as they cannot work on their own. They are believed to be the type of people who cannot make good managers or stewards. In their love life, they often do not realize any of their dreams in loving or being loved, and they do not know when they are in or out of love.