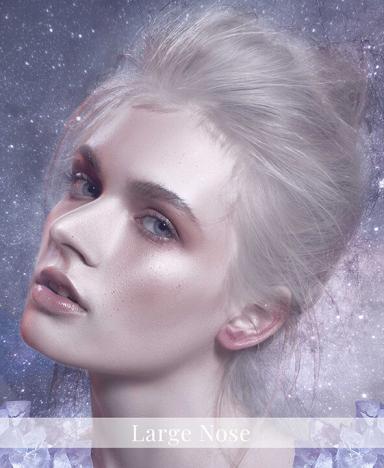 A nose is considered large when it is out of proportion to other facial features such as the eyes, ears, and mouth.

People with large noses have many positive attributes that make them unique. Luckily, in most instances, those with a larger nose take up challenging roles and responsibilities in life.  These people are well-liked and normally considered well respected.

They are thought highly of in work or in the community. More often than not, the bearer of a large nose is self-reliant, confident, and ambitious. They are believed to experience and practice self-drive in achieving dreams and goals.

A male whose nose is large will have a higher level of self-confidence. To have a relationship with a bearer of such a nose means their standards are extremely high and they tend to become a perfectionist. These people believe that whatever they undertake in life is right and unfortunately not many people can easily change their minds and opinion.

When a nose becomes the most noticeable feature on one’s face, it will have a significant meaning and interpretation of that person’s life, in terms of their psychological stability and personality. People with large noses are deemed to experience psychological turmoil and instability if they get divorced. One weakness of these people is that they experience a change of mind quickly, in terms of thinking and decision making. If the tip of the nose is reasonably long in comparison to one’s other facial features then this person is considered yin. Larger nosed people are thought to experience indifference when making decisions. In most instances, they find it hard to be able to express themselves when trying to give or provide feedback to others.

Sometimes they are oversensitive to matters and they are too consequential. They easily complain about issues and often end up saying things that cause harm and even pain to those around them.

They have an intrinsic motivation that makes them drawn to leadership roles. In most cases, those with a larger nose will find climbing the career ladder easy. Being somewhat emotional at times the large-nosed person has general characteristics of a lighthearted nature.

To be a woman with a large nose means there is a need to be more accommodating with others and show an emphatic heart to those that face misfortune. The major flaw of the larger nosed female is emotional outbursts, whereby they easily react to situations and do not think before acting. On a more positive note, they are easily touched by the outcome of their acts and even to people less fortunate than themselves.

Respect is paramount to them when interacting with others and even when other people respond to them. Leadership is important to the larger nosed women especially with crating good relations. For both gender's those with a large nose like helping people other than themselves, which is a priority and they are believed to be lucky in life, especially in their forties. This may happen in aspects such as business, education, relationships, and even jobs.

Lines and wrinkles on the upper bridge of a large nose or even each side of the nostril that is brought on through smiling, means the bearer is going to have a great life. These wrinkles might be horizontally, up and down, or perhaps angled. To see a line between the two eyes means a change of one’s lifestyle and they will have a passage to a better and luckier life.

What happens when people with larger noses undertake boring jobs? It is believed that larger nosed people detest chores or even tasks that are considered boring. In an event where they are given such roles they never do them for long. They will end up quilting naturally, as we have outlined before, larger nosed people are more comfortable in leadership roles, as a result, it is hard to find them undertaking tasks that are involved with receiving orders. These people will not be satisfied at being waiters or following orders of others.

Positively, they are believed to have the tendency of pursuing their dreams and ambitions, even sometimes willing to do anything to get ahead. Due to this trait, they are likely to be promoted because of this aggressive nature. Their major weakness, however, is that once they have achieved their goals, they lose interest, so easily and fast compared to the other people.   Their success or failure is attributed to the wrinkles that may appear in their forties.

People with large noses make perfect leaders in any given institution or organization. Their leadership skills and roles are very effective in any working environment and in most cases are deemed to be people who can bring on positive change. If we look at the greatest leaders who achieved or have achieved the best leadership attributes as well as credit, most of them have a large nose. If we look at some of the famous leaders, such as President Clinton and Jimmy Carter holds a larger nose.

Though some may try to change the look of a large nose by means of plastic surgery, the attributes that are linked to the larger nose are still present, even though this person may have changed their appearance.