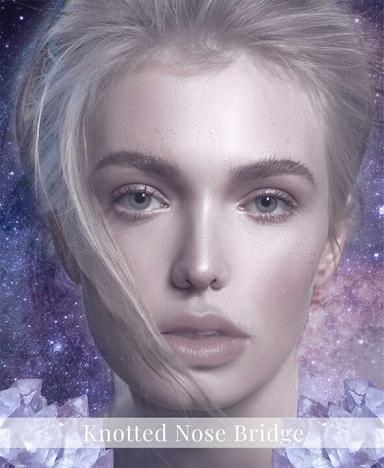 This is simply the nose bridge which fully displays a very clear and visible knot, rather than just being ordinarily smooth and straight.

Whenever a person looks at this nose from the front or side view, the knot will be noted a lot easier.

These types of people are thought to be very stubborn. It has been established that anyone with a knotted nose to a greater degree portray naughty traits, whether at a new place or right in their backyards. They never settle down to focus on their targets and goals, but love causing havoc and disturbance to anything close to them.

They can never be trusted with anything potential because they are believed to be the type that will never work on anything to achieve the best desirable results.

They always have hidden ambitions and agendas in their undertakings. They cannot do anything that does not benefit them. They are highly motivated by positive end returns and rarely consider the possibility of incurring a loss. They have a determined personality, which makes them rarely defeated.

It is believed that their characters are unchangeable, and that anybody who wants to work with them has to accommodate this trait as trying to change them may result in disagreement.

They never trust anybody at any given point in their lifetime. This is essentially believed to occur due to their constant mistrust in other people. It is a major challenge that keeps changing throughout one’s life, and such people may end up being permanently sick of the tendency of not trusting anybody and anything in their lives.

This affects their working environment and love issues.

This personality can work anywhere, and the subjects are believed to achieve most of their dreams within any sphere of life, though they hardly work to earn it. Any of their relationships do not end up well, especially marital ones. They do not exhibit any trace or trait of unconditional love. They may end up as failed cases in the event they get married because they do not find a lot of solace from loving other people or by being loved back.