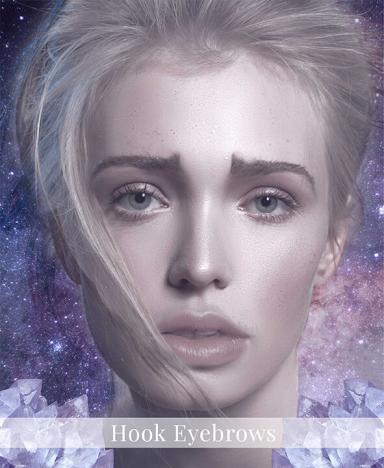 The hook eyebrows are rather unique; they have a highly noticeable appearance of a hook.

Their inner edges curve as if they are being fastened or clasped to the face. The major distinguishing trait for these individuals is their stubbornness. These people show the ability to listen to other people, but the reality is that they don't  listen and this is their major weakness.

They believe that their way is the only one that is right. At times, this lands them in serious trouble and may account for their failures in life.

People with hook eyebrows have very high ambitions and self-drive. If the eyebrows appear in females, then they will not be dependent on their husbands or anyone else. They always seek to pursue their passions and careers and carve out their personal niches.

Chinese facial mythology believes the hook eyebrows indicate that they will have a good education make the best of what is given to them. They have a natural interest in the public. Perhaps some type of charity work would suit the bearer of hook eyebrows. They are like sharp eyebrows in this respect.

They need to cultivate the diplomacy and attack a task in order to be more successful. They have strong feelings and often seek emotional outlet for them in the business world. They make an excellent leader. Independence and creativity are the most important traits of hook eyebrows. They are usually found in a professional career associated with finance marketing. They have natural leadership qualities and a true individual heart.

They take care to understand others. They like to listen to other people's problems and provide advice. A career such as a psychologist or a psychotherapist would suit the bearer hook eyebrows.

The advice for the bearer of hook eyebrows is to not take yourself too seriously. They can overcome any type of problem thrown at them. The routine job is not normally suited to them, however the hook effect of eyebrows normally indicates they can be rather independent. Even when working for somebody else they are usually in charge of their own workload. They are often a quiet person and come across as being rather shy. They are normally found in the arts and sciences especially metaphysics.