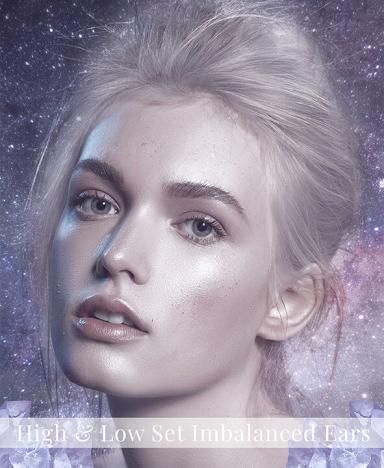 When a set is low, this tends to describe the type of person who has a rough time in relationships or who has a hard time really communicating with people over all. They tend to have a lot of fear or worry with regards to maintaining healthy relationships as well as maintaining any kind of connection with others in the human race. In addition when the ears are low set and not balanced, this tends to show that there is an up and down way of being which makes it hard for others to keep up with their moods.

Sometimes those with Low Set Imbalanced Ears are referred to as manic primarily because when they are up they are really, really happy and have a wonderful time with life, but when they are down they can be as low as suicidal or can exhibit other kinds of destructive behaviors.

It really just depends on the kind of person they are and how well they have fine-tuned their coping skills throughout life. Much of the time if a person with low set imbalanced ears worked on creating rather than on destroying, they would find their lives to have a lot more meaning. One of the excellent attributes of a person with low set imbalanced ears is that they tend to be the artistic type, who are deep and intense and inspired as well as inspire others to creatively focus on their own heart’s desire. In a sense, even though they lack consistent balance, they bring a lot of beauty to this world.

Similarly a person with a set of High Imbalanced ears, would be more of the high functioning sort regardless of their particular issues, they would still be able to make it through. Both of these kinds of imbalanced ear sets tend to have education but had to be subjected to a lot of changes which affected their abilities to really process in their life, and since a person who has no stability cannot really learn how to produce stability, this is a particularly challenging issue which these ear types must go through.

They tend to also have some issues of sicknesses and be susceptible emotionally to all of the different kinds of drama or emotional upheavals that the world has to offer. Often times these are the types of people who are the most successful in life as a result of having to learn how to develop the skills to push past the emotional difficulties of their lives, which means that they often try harder and strive for more than those who were born with a lot and had much to depend on in their own lives.

These individuals usually have to create their own level of security as a result of the fact that their family often does not provide them with support in any way. So they tend to be late bloomers, but once they take flight, they can move mountains.