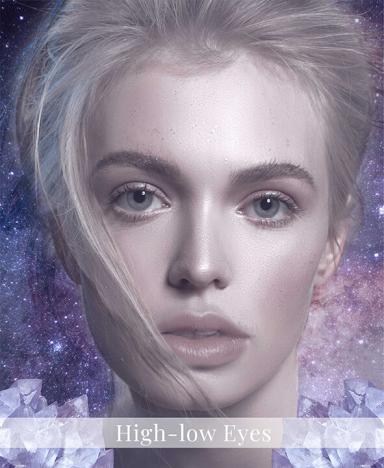 High-low eyes are very similar to yin yang eyes but rather than the eye being a different size, truly it is that one eye is higher than the other and the fold of the eye lid makes it appear that one of the eyes are not the same size as the other one.

You need to pay attention to the eye shape and focus on whether or not the eye is different by looking towards the eye lid rather than the eye directly. When you are looking at people with these kinds of eyes their eye lids may actually be more focus attracting than the eye itself.

People with high-low eyes are often introverted people. They like calm and quiet environments. Quite often with eyes like this, these people will have harsh or difficult lives in the early to mid-part of their lives. They tend to have long lives naturally though and the negativity that they suffer early on in life makes way to a happier and peaceful time later in life – usually after 50.

Their golden years truly are great and because they adapt so well to old age it is commonly perceived that these people are old souls. Younger in life they take things as they come to them but they also have a hard time with adjusting to the normal situations of younger people. It could be that they simply do not fit in or that they are above normal juvenile tactics.

Dating and social life, especially early on, is a difficult task for these people because they find I hard to relate to others. They often are aware of their own disdain for other people and have a low tolerance for people in general. They have a tendency to be picky or fussy and like that have things just so.

They have a placement for things in their mind and they want things done a certain way. Having a relationship can be difficult because they have to go outside of their comfort zone and share their space or lives with another person and usually have a hard time doing so.

Giving up their own dreams and plans are hard for these people but this trait also makes them focused on aspects of life that are important to them. These people are likely to have a long and impressive bucket list and they fully intend on completing everything on the list.

They have high hopes and dreams for their own selves and they rarely lose focus on a goal. This can be problematic if they plan on getting married and starting a family… but if they are focused on climbing mountain, starting a business, making millions of dollars or these types of big goals are completely attainable. Do not doubt that when a person with high-low eyes put their minds to a task in their life that they will not be the one to give up until their task is finished and completed to what they feel is adequate.

This can make them appear controlling but it is not entirely that. Mainly their goals are their legacy and they take them as important aspects of their lives in lieu of relationships or familial bonds.